Chelsea sits near the top of the 2020-21 Premier League season table with the potential of taking home the Champions League trophy. The London-based club appeals to wide range of demographics, not only in the diverse city it calls home, the entire British nation, and the rest of the world. With over 16 million followers on Twitter alone, Chelsea’s global presence cannot be ignored.

Nigeria ranks as the nation with the most followers, rather than Chelsea’s home in the United Kingdom. 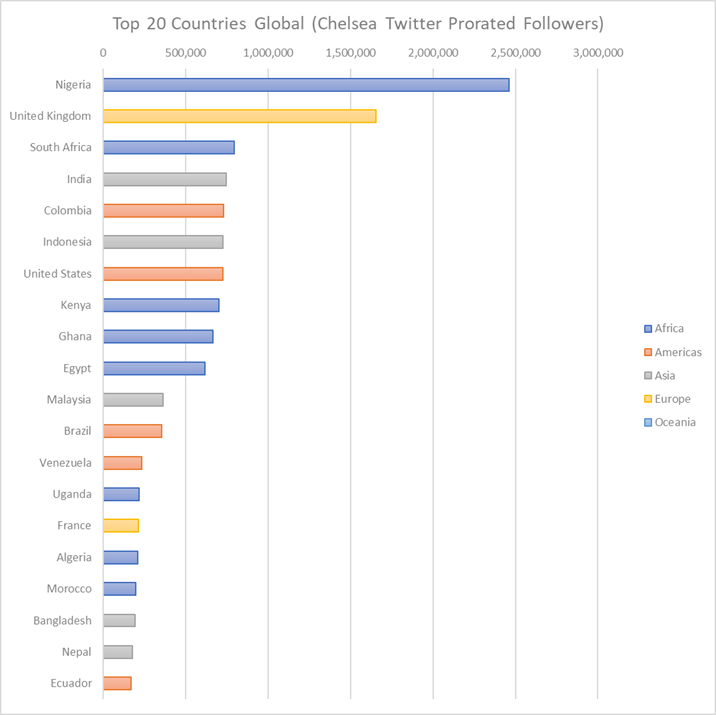 This graph displays a prorated follower count based on the roughly 3 million followers collected from Affinio, made proportional to Chelsea FC current Twitter follower count of 16,921,751.

Nigeria is found at the top of the follower count table, with an estimated 2,462,675 followers. Meanwhile, the UK sits in a far second, with 1,655,506 followers. This drastic social media presence in Nigeria could be due to the number of Nigerian Chelsea players. Past players like John Obi Mikel, Victor Moses, Fikayo Tomori, and current player Tammy Abraham are all of Nigerian descent and may have influenced the nation’s attention to the club and thus social media following.

However, this wide gap in the follower count may originate from the difference in population. Nigeria has nearly 145 million more people than the small countries that comprise the UK. When compared on a per capita basis, England beats out Nigeria with 2,159 followers per 100,000 citizens, compared to Nigeria’s 1,225 per 100,000 people.

Eight out of the top twenty nation’s followers come from Africa.

Africa is the region with the highest overall follower count, with the Americas in second, and Asia in third. However, the Americas and Asia are both tied with the number of nations in the top 20, with 5 nations from each region. India ranks as the fourth highest nation, and the first from Asia with an estimated 638,918 followers. Colombia ranks fifth, just below India, with approximately 627,164 followers, and the first nation from the Americas. A European nation is not seen again until spot 15 (France, with about 183,733 followers.)

When analyzed on a per-capita basis, Botswana, the Maldives, and the United Kingdom show the highest fan concentration. 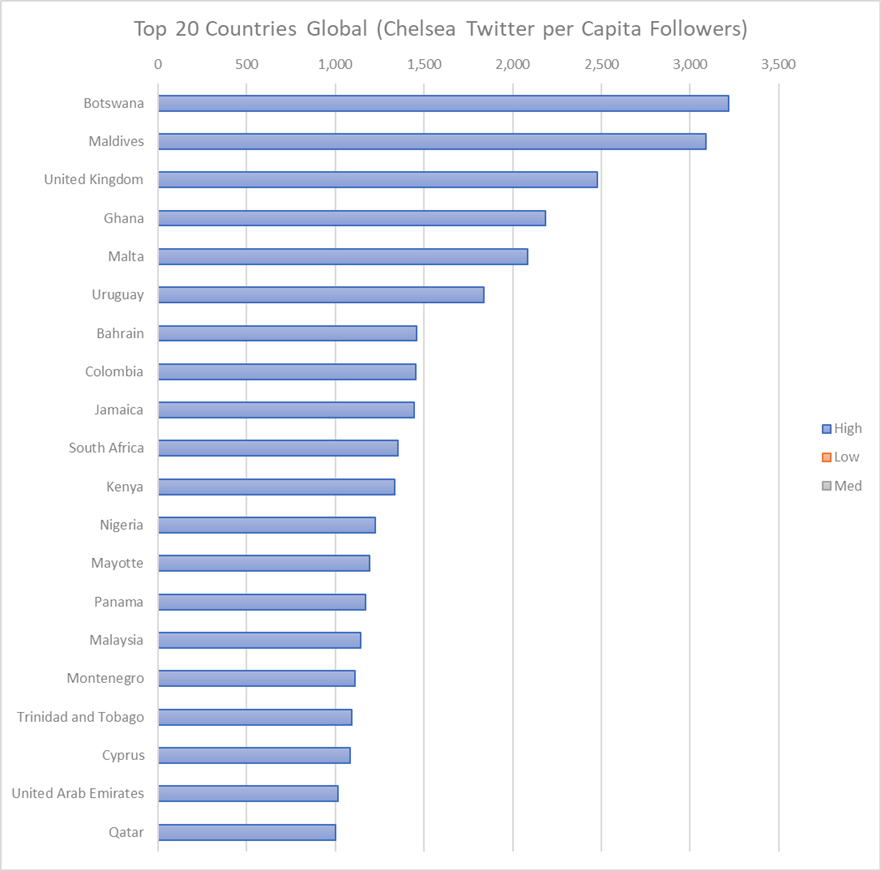 Although the United Kingdom may not be Chelsea’s leader in followers, it is the third highest for per capita followership (followers per 100,000 people of the nation's population).

Analyzing the UK on its own reveals that England takes a drastic first in prorated followership. England however has a significantly greater population than its other UK counterparts, which influences the overall follower count. Through the per capita lens, contrary to the disparity in the prorated follower count, every country in the UK is fairly close in fan concentration. 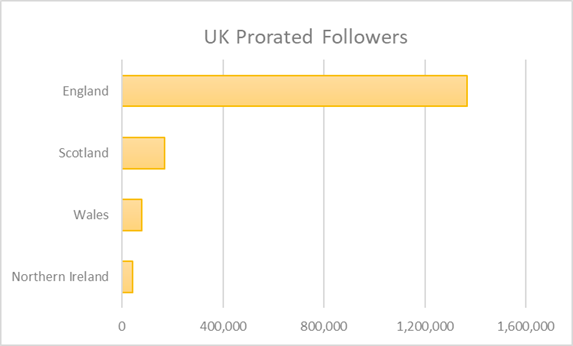 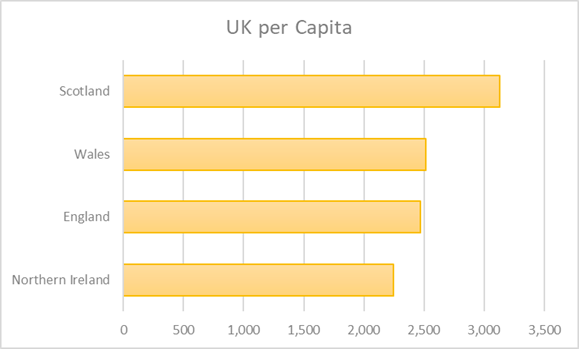 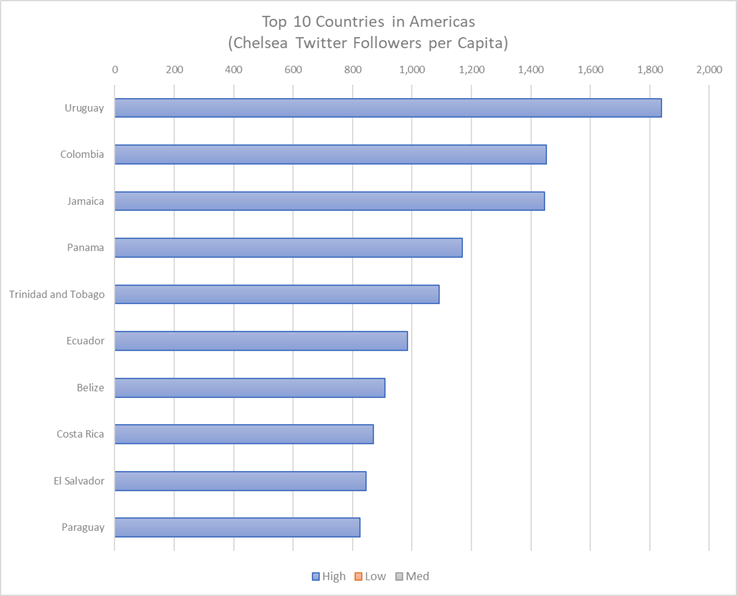 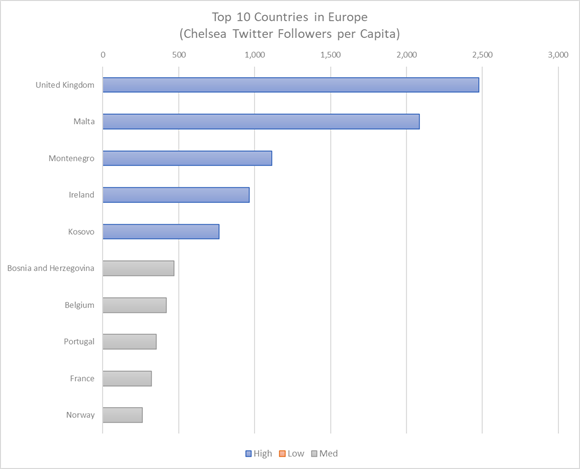 Perhaps most shocking, though, is the number of small islands that have a high fan concentration. In the Americas, Jamaica is in third place, and Trinidad and Tobago shortly behind in fifth. In Europe, Malta is second, right behind the giant United Kingdom, and Ireland in fourth. Only five countries in Europe are classified as having a high follower concentration. The remainder fall into the medium and low categories, which may be rather unexpected as Chelsea is a UK football club and participates in the European Champions League. However, lesser followers from European nations may be due in part to the vast number of other European clubs dividing support for Chelsea. As pictured in the “Top 20 Countries (Followers per Capita)” Mayotte, Mauritius, and Cape Verde are all small islands off the coast of Africa that have high follower concentrations. Meanwhile, in Oceania, Australia and New Zealand only have a medium fan concentration. The United States, which ranks seventh in prorated followers, is twenty-first in per capita fan concentration, likely due to its exceptionally large population and its American football- rather than football- influenced culture.

Without a doubt, Chelsea FC has a wide and vast global following.

Millions of fans from across the world follow Chelsea. As social media continues to dominate mainstream culture, the potential for Chelsea’s fan base growth is substantial. Specifically, those nations with lower fan concentrations but high populations such as the United States, Mexico, and Canada suggests the possible expansion and creation of new Chelsea fan bases.