Cracking the Code: Does Path to the Pros Affect NFL Quarterback Success?

Published on August 30, 2021 by Alexander Harriman   Share this on:

NFL Draft from the floor by ryan lejbak is licensed with CC BY-NC-ND 2.0.

In the 2020 NFL Draft, the San Francisco 49ers selected quarterback Trey Lance with the 3rd overall pick. However, some experts questioned the decision due to his lack of college experience, as Lance played in only 13 games in his college career.

Then, 12 picks later, the New England Patriots selected Alabama’s Mac Jones, a QB who only started for one season after beginning his career backing up Tua Tagovailoa. Yet, this is nowhere near the least experienced QB the Pats drafted; in 2005, Belichick drafted a QB who only threw 14 college passes. That man was Matt Cassel, who went on to have a decent NFL career.

Similarly, entering a 2018 NFL Draft loaded with QB talent, some experts questioned if the 7th overall pick, Josh Allen, could make the NFL jump from “lesser competition” at a Group of 5 school in Wyoming. This talking point came up more often with Allen compared to other QBs from larger schools such as Southern California (3rd overall pick Sam Darnold) and Oklahoma (1st overall pick Baker Mayfield).

It has been a trend in recent years for teams to select QBs that do not fit traditional QB molds and paths to the NFL. This begs the question: does college game time matter for a quarterback’s NFL success? Are large football conferences the best QB breeding ground? Is there another off-the-field statistic fans and teams should be paying more attention to? Or will talent shine regardless of a QB’s road to the pros? In this study, these questions will be answered.

For the analysis, every QB drafted from an FBS school from 2002 – the first season after expansion – to 2020 were examined. Due to the inconsistent nature of FCS data, QBs from an FCS school, such as Carson Wentz and Joe Flacco, were excluded. Statistics were collected for the quarterbacks that remained based on their college career, their NFL rookie season, and their NFL career. A player had to acquire NFL stats to be included in the study, so players that never played a regular-season game in the pros did not count.

Linear regressions were then applied to the dataset to determine what is significant to NFL success. Six variables were used as dependent variables for separate regressions: Yards Per Attempt (YPA), Yards Per Game (YPG), Touchdowns Per Game (TD/Game), Interceptions Per Game (INT/Game), Completion Percentage, and Quarterback Rating (QBR).

Every dependent variable got the same seven independent variables from the QB’s college career: the age of the QB when he was drafted, if he was an underclassman or not, the QB’s school and the conference the school plays in, the player’s draft round and overall pick number, and the college games played.

How to Make a Great First Impression

The first analysis projected a QB’s rookie season. Despite all the possible combinations in the study, all the independent variables are selectively significant. The best of the seven is a player’s draft pick. A QB’s draft spot significantly impacts rookie numbers for the three rate statistics (INT/Game, TD/Game, YPG). A QB’s draft round is also significant for those three rate stats, but to a lesser extent than the overall pick.

Despite concerns over a lack of experience hurting QB success odds, the only NFL statistic college games played affects is completion percentage, and only at the 80% level. Similarly, draft age has the same weak relationship to rookie success. Both statistics are only significant with completion percentage; they aren’t crucial for projecting the other five dependent variables. 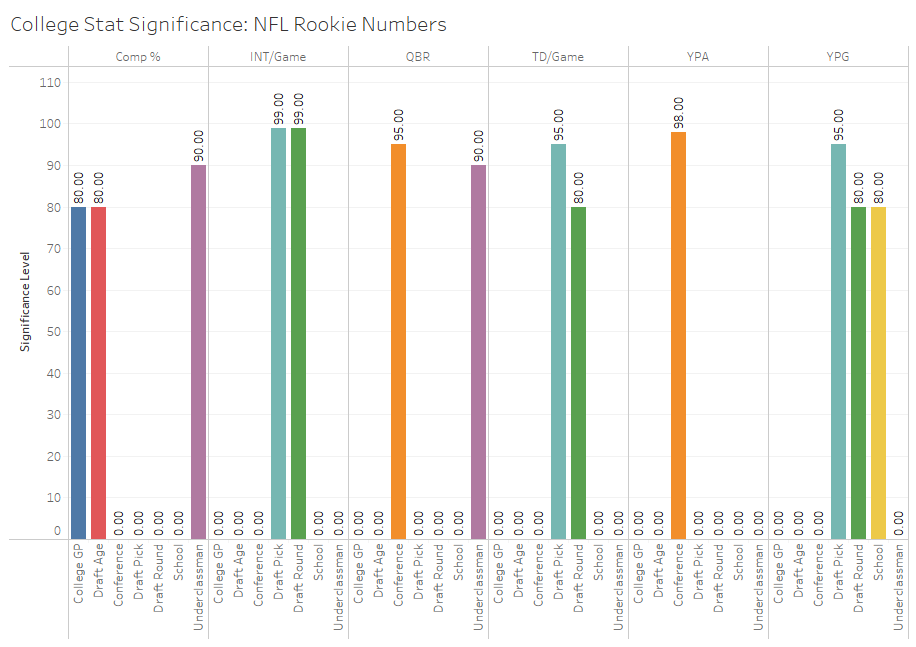 How to Succeed in Your NFL Quarterback Career

Now that the QBs have gone through the growing pains of year one, the next step is to analyze their entire career outputs. The results are very similar to the rookie analysis, but with a few key differences.

The number of college games played significantly affects career QBR and TD/Game at the 80% level, but that is as far as the correlation goes. 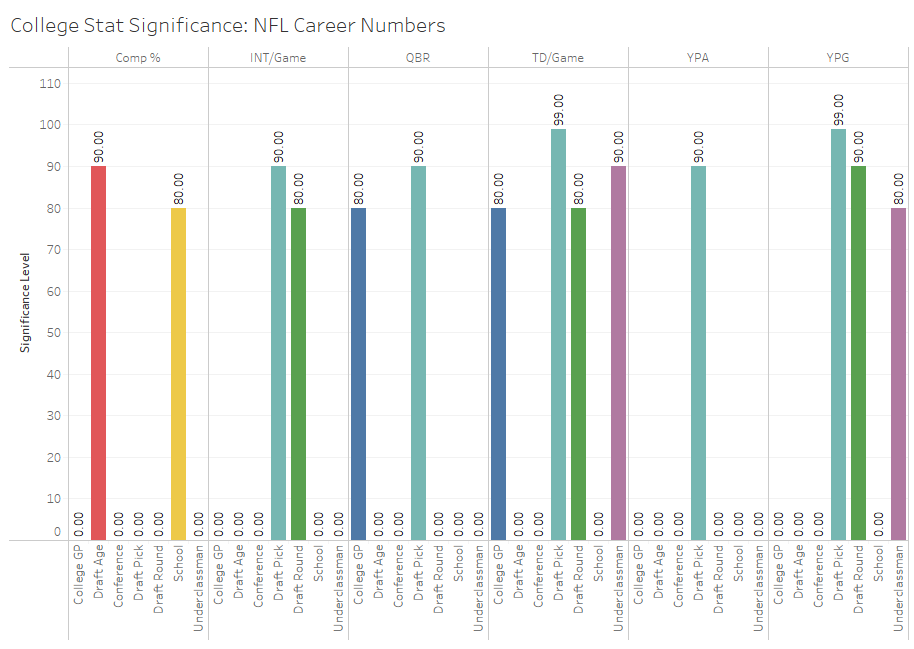 Overall, the number of games a QB plays in college does not have a substantial effect on their odds of succeeding at the NFL level. Many of these off-the-gridiron statistics perform poorly in this study. Projecting a quarterback’s jump from college to the NFL requires a deep dive into how well the player is on the field. Considering the strong correlation between draft pick and success in this analysis, NFL teams do a great job making those deductions.

So, the next time your team drafts “the guy” who spent very little time in college being “the guy” running the offense, give him a chance. After all, whether he played in the SEC or the Group of 5, whether he is a young hotshot or a grizzled college veteran, talent will shine under the bright lights of the NFL.