Findings from a recent study by the Samford University Center for Sports Analytics illustrate the truth behind the “home court advantage.”

“Our analysis found that the home court winning percentage declined significantly during the 2020/2021 season,” said Darin White, executive director for the center for sports analytics. “Once we realized how much the home court advantaged declined, we decided to dig deeper to see if we could determine why.” 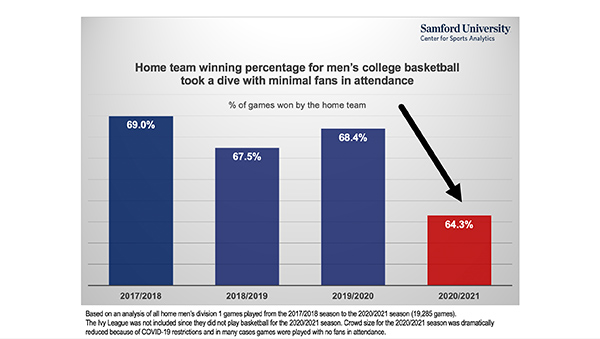 Meanwhile, the average number of fouls called on the home team during the 2020-2021 season (16.80) was not statistically different than the previous three seasons (16.86).

This indicates that home crowds, which were absent or significantly reduced during the last season, do in fact impact referee decision-making.

“This year’s college basketball season provided sports researchers with an unprecedented opportunity to better understand the impact fans actually have at sporting events,” said White. “Our findings suggest that fans have far more influence than previously believed and have the ability to impact the game in numerous positive ways for the home team.”

Guided by White, students Cooper Frazier, Amelia Leahy, A.J. Mcinnis, Charlie Newton, and Clay Phillips collected data from 19,285 regular-season games over the last four seasons. All NCAA Division I men’s basketball games were included in the analysis, with the exception of neutral-site and tournament games. Ivy League games were also excluded, as the conference did not play men’s basketball during the 2020-2021 season.

Other key findings from the study include:

“Research published in Psychology of Sport and Exercise by Nevill and colleagues suggests that fan noise is an influential factor in referee decision making,” added White. “Our findings show, statistically, that the crowd has more influence than many might think,” added White. “They are able to both raise the performance of the home team and subconsciously influence the officials to favor the home team in small ways.”

According to White, “During any basketball game there are numerous borderline fouls. Some get called while others do not. Research has shown that referees will sometimes subconsciously use the noise of the crowd as a heuristic cue when making difficult judgements and decisions. This would explain why we experienced a significant drop in visiting team fouls this past season since games were played in front of reduced to no crowds.”

Nathan Kirkpatrick, fellow in the center for sports analytics, added, “Duke, Kentucky, Indiana, and even a school with an outstanding fan base/arena like New Mexico did not make the tournament this year, lending credibility to the decline in normal home court advantage with the crowds.”

The Samford University Center for Sports Analytics seeks to be an international thought leader in the emerging field of sports analytics by providing a forum for industry professionals and students to learn about the increasing role of analytics in the global sports industry. The center is dedicated to fostering growth and innovation in this arena, and the center seeks to enrich opportunities for learning about the sports industry. The center's mission encompasses all areas where analytics impacts sports including fan engagement, sponsorship, player tracking, sports medicine, sports media and operations.