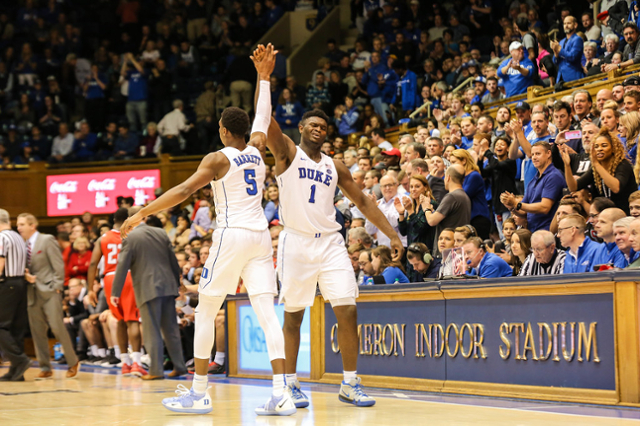 High school recruiting lists are one of the hottest topics among college sports fans. Since superstar players can turn a team around on their own in basketball, the top talent can turn a team’s fortunes around quickly. However, in modern college basketball, many of the best players leave college after just one season. So, with minimal college background, fans and teams can use high school recruiting lists to project NBA success. In addition, many NBA Draft boards and college basketball rankings have similar player orders, and several players have been drafted after a poor college season because of his projected talent in high school.

But is this practice a good idea? Can a team use high school rankings to determine college success? In this study, those questions are investigated to attempt and see if high school prospect rankings can determine NBA success, and if not, if any other high school-related statistics are significant.

This study investigates every player drafted in the first round from 2006 to 2020. In 2006, the NBA required prospects to wait one year after high school to be drafted, making that year the best beginning for data collection. First, each high schooler's class ranking and prospect star number were tracked. These numbers came from 24/7 Sports’ high school prospect boards. After recording the high school statistics, the college each player attended and the conference that the college plays in was tracked. If a player did not attend college, such as a player drafted from a foreign league, they were removed from the study.

As for the quantifiers for NBA success, each player’s NBA career averages for points per game (PPG), assists per game (APG), rebounds per game (RPG), and Win Shares per 48 Minutes (WS/48) were used. Win Shares is an advanced statistic that tells how many wins a player is worth based on their overall play on the court. Using the rate statistics for each player levels the field for players who spent most of their career on the bench. The NBA statistics came from Basketball-Reference.

When PPG was used as the dependent variable, three independent variables were significant at the 90% level. The amount of years players spend in college and their high school ranking is somewhat significant to NBA PPG averages. However, the most important variable was the player’s NBA Draft pick. This discovery fits expectations, as higher draft picks are more likely to become starters earlier in their careers.

The surprise of this study is how important the player’s college and the conference said college is in is to points per game. Both variables were significant at the 80% level, indicating some level of correlation. Overall, high school rankings are reasonably good at projecting NBA scoring numbers, but it is by no means an exact science. College and draft statistics are better indicators.

When APG was used as the dependent variable, only one variable was significant at the 90% level: the player’s NBA draft pick. However, just like points, seeing draft pick affect APG numbers is not a surprise considering high picks get more court time.

Yet again, college and conference are significant at the 80% level. Considering the relatively poor correlation for most variables, college and conference are the second and third most important variables to NBA assists per game. Overall, the results suggest there is no straightforward way to project assists at the NBA level, but what is clear is that high school rankings are not the way to make this projection. 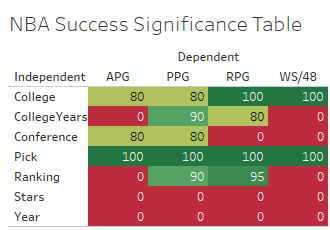 Based on the findings, high school rankings are a poor indicator of NBA success. Although there is some significance level when determining NBA points per game and rebounds per game, other aspects of a basketball player’s upbringing through high school and college are much better indicators of performance at the highest level. In fact, while high school ranking has some significance, there is no value in analyzing whether a prospect used to be a 5-star recruit or a 2-star recruit, as none of the four statistics have any level of significance for recruiting stars.

If a fan or team wants to attempt to find the next NBA star, they should look at a player’s draft pick and where they attended college, if the player did so. These are the only two statistics with a minimum of 80% significance for all four indicators of NBA success, with the draft pick being highly significant to all four.