Second Year Syndrome: Why Promoted Bundesliga teams Take Longer to Find Stability than Teams in the Serie A, La Liga, and EPL 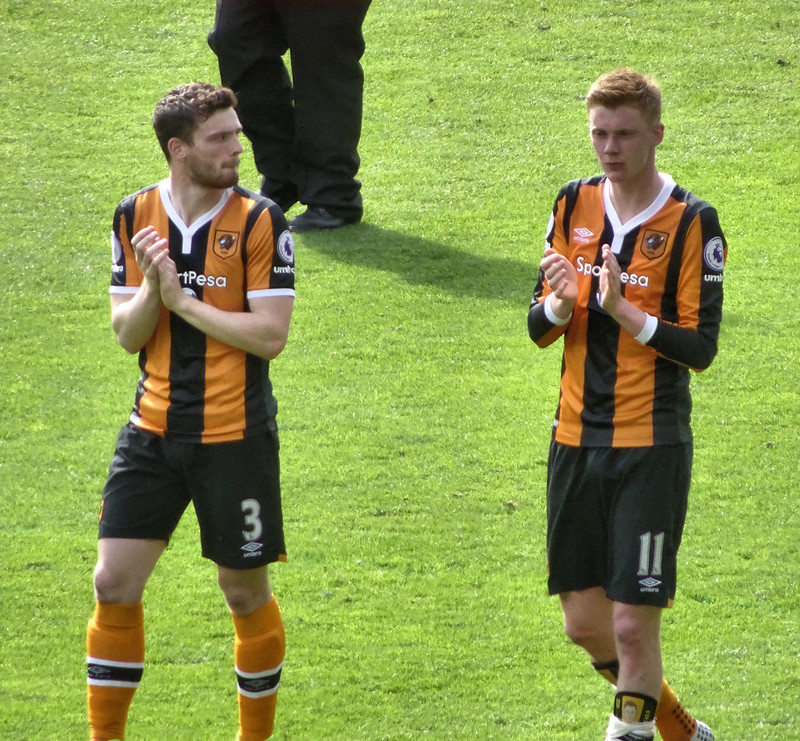 In European football, any team can make their way to the top flight of their nation’s respective league via promotion. This nature that has drawn fans from all over the globe to watch, as Brazilian legend Pele coined, “The Beautiful Game” (Corkhill, 2008, para. 1). However, promotion to the top flight is only part of the challenge for teams fortunate enough to earn that right. Surviving in the top flight is never a guarantee for anyone in European football; least of all, the teams promoted the previous season. However, even surviving the first season opens the door to a phenomenon that has haunted many a football fan, manager, owner, and player: Second Season Syndrome.

Second Season Syndrome is a term used in European football when a newly promoted club survives year one and gets relegated year two. The term is used mainly when a team surprises year one and does much worse the second season. For example, when Huddersfield Town made it into the Premier League (EPL) for the first time in their existence back in the 2017/18 season, 5Dimes, Pinnacle, and BetOnline made them their odds-on favorites to get relegated (McGuire, 2017). Despite the lack of faith amongst betting houses and pundits, Huddersfield Town miraculously survived with 37 points. The following season, they scored just 16, the third-worst points tally in the Premier League’s history (Kawala, 2020). Similar stories exist outside of England; in 2005/06, Celta Vigo finished sixth in La Liga a year after promotion but finished bottom of the league in 2006/07. A similar fate occurred to Bundesliga side VfB Stuttgart, who finished seventh in 2017/18 but lost in the relegation playoff to go down in 2018/19. Several teams have faced Second Season Syndrome in European football.

However, for all of the victims of Second Season Syndrome, European soccer has also presented teams that not just improve, but thrive in their second season. There is no better example of this than Leicester City in the EPL. After winning promotion the year before, Leicester barely survived in the 2014/15 season by finishing in fourteenth with 41 points. One year later, Leicester overcame 5000-1 odds to win the Premier League, improving by 40 points from the year prior (BBC Sport, 2016). The juxtaposition between the success some teams experience in year two and the collapse some teams undergo in year two puts the concept of Second Season Syndrome into question. Is this a real trend amongst football teams? Or is it just a few high-profile examples?

In this study, data from the Big 4 European football leagues are analyzed to determine whether Second Season Syndrome is real, and if so, what leagues are victimized by it. Data was collected from all promoted teams into the Big 4 European leagues: the English Premier League (EPL), Spain’s La Liga, Italy’s Serie A, and Germany’s Bundesliga. Starting with teams promoted in the 2004/05 season, data was collected on their points in the standings, their final position in the league, their goals scored, goals against, and if they were relegated. These variables were tracked until the team was relegated or until four seasons passed, whichever came first. Data was also collected on the number of players purchased by each promoted club, the number of players sold by each club, and the net money spent on transfers, where a negative value indicates more money brought in than spent. For this data, players bought on loan counted in the player and money tally, but players brought in as a free agent or on a free loan do not count.

Some data were omitted from analysis due to the changes experienced in Serie A during the analysis period. In 2004/05, the league was expanded, and as a result, six teams were promoted instead of the usual three. However, the following year only three were relegated like usual, leaving teams that would have been relegated in Serie A for longer than usual. Also, due to the Calciopoli scandal in Italian football that saw some of Italy’s most successful teams get relegated (such as Juventus), the teams promoted into Serie A for 2007/08 were much stronger than a typical promoted team. As a result of these outliers, Serie A data began with the 2008/09 season.

After collecting the data, the average point tally for teams each year after promotion are plotted and compared to determine the point trends. From there, a one-variance ANOVA test is run on the variables to determine which of them are statistically significant. 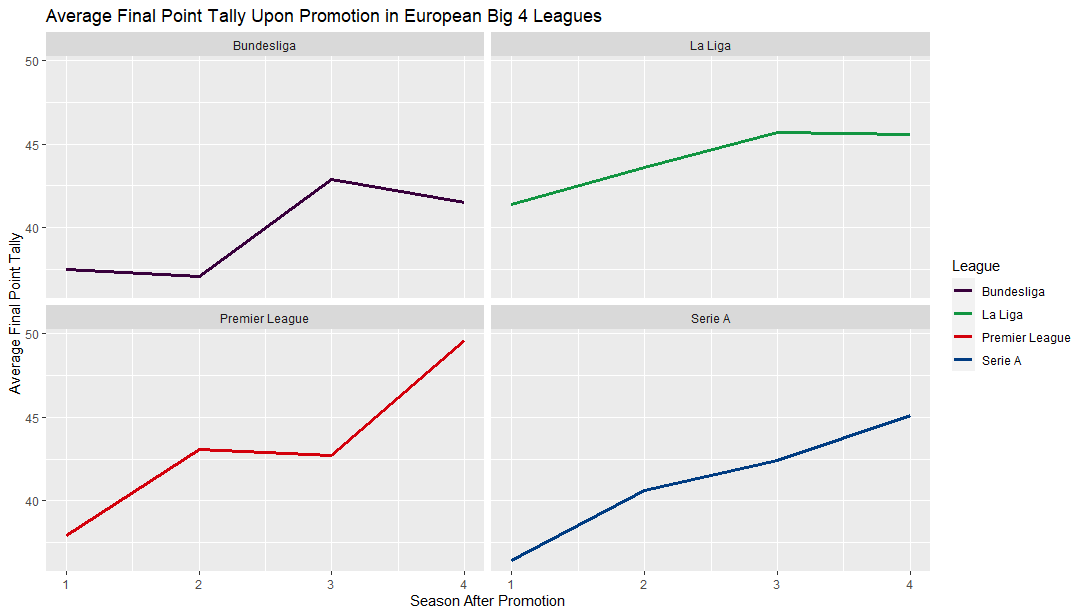 Further ANOVA analysis of the promoted teams showed that the number of goals scored and goals allowed were statistically significant variables in determining the number of points a promoted team scores. However, this was not the case for players bought, the number of players sold, and the net transfer fee of those players, except for players sold in Serie A, which is statistically significant at the 95% confidence level. By analyzing the adjusted coefficients of the ANOVA model results, it is goals for, not goals against, that is a more vital indicator of success for promoted teams in the Premier League, La Liga, and Serie A. Conversely, goals against are a  more vital indicator in the Bundesliga. 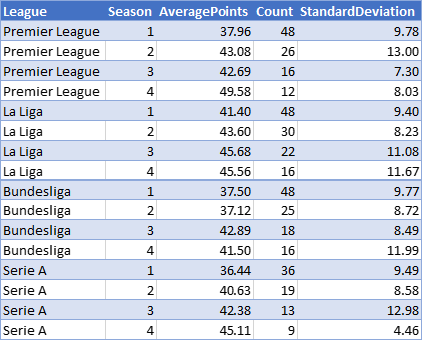 Based on the findings, there is evidence to suggest that Bundesliga teams are more likely than their other major European counterparts to suffer Second Season Syndrome. On average, Bundesliga teams do worse in their second seasons. As for teams in La Liga, the Premier League, and Serie A, they improve on average and are less likely to suffer a second season collapse. So, for German teams, surviving the first season is undoubtedly an accomplishment but far from a guarantee of long-term success. Not even surviving year two guarantees a long Bundesliga stay; although German teams do tend to improve by nearly five points in season three, they again fall off slightly in season four. In England, it is not second season syndrome but third season syndrome that is more prevalent. The average English promoted team drops off slightly in their third Premier League season. As for Spain and Italy, while La Liga teams do slightly worse in year four, both leagues see relatively steady improvement year after year, so a sharp decline in performance would not be typical.

Despite the popular opinion that you must spend to survive upon promotion, goals scored and goals against are more valuable for survival. In England, Spain, and Italy, a promoted team should focus on scoring goals to stay in the division, while in Germany, a promoted team would be wise to focus on preventing goals. Should a team find a way to do this, and especially if they can manage to do both, they will have a strong case for survival. Based on these findings, roster turnover and investment does not affect success in a meaningful way. Therefore, instead of spending big to aim for survival, spending on goal-scoring threats (or preventing goal-scoring threats in Germany) is a more effective plan.

Corkhill, B. (2008, October 16). In Jogo Bonito: "The Beautiful Game". Retrieved from https://bleacherreport.com/articles/69649-jogo-bonito-the-beautiful-game.

Kawala, A. (2020, July). In Ranked! The 20 worst Premier League teams ever – by points total. Retrieved from www.fourfourtwo.com/features/worst-premier-league-teams-ever-points-total.

Alexander Harriman is a Senior Mathematical Sciences major at Clemson University. He plans to pursue a career in sports analytics, with the goal of performing analysis for a professional sports team. LinkedIn