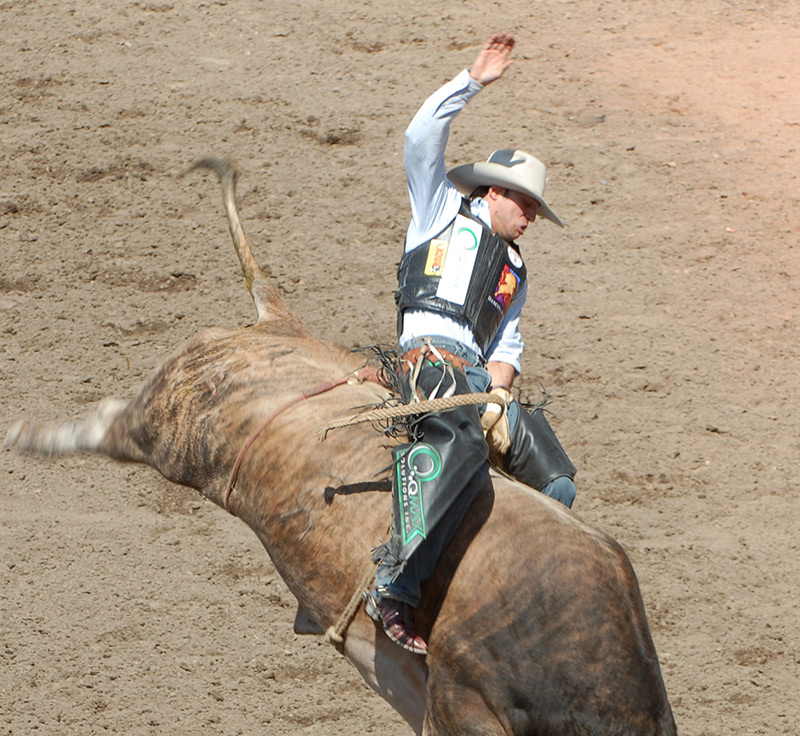 The highest possible score that can be achieved in a Professional Bull Riders (PBR) event is 100 points. It is nearly impossible for a rider to be awarded a 100-point score as for this to happen, the bull must be perfect, jumping the highest it’s ever jumped, spinning the fastest it’s ever spun, kicking and turning in every direction. Additionally, the rider must be perfect and precise in every movement for the entire eight seconds required to ride the bull.

To see if there is a correlation between size, country of origin, and experience of a rider to the number of career 90-point rides, multiple regressions were run on the top 50 riders of the 2020 PBR Tour. In this article, success is measured by the number of 90-point rides in the career of a bull rider. It is also important to note that the riders rotate bulls every weekend, so each rider is riding the same bulls or a bull of similar caliber.

Correlation Between Size and Success?

The first regression dealt solely with the heights and weights of the riders to see if there is a correlation between size of bull rider and the number of 90-point rides. The average height of the 50 bull riders is 68.54 inches which is approximately 5 ft 8.5 inches. The average weight for the riders is 151.56 lbs. After running the regression analysis, there were no statistically significant correlations between the height and weight of a rider to the number of 90-point rides. This conclusion is further backed by the T-statistic. A high T-statistic or a T-statistic that is greater than two or less than negative two would provide confidence that the coefficients are predictors of success in bull riding. However, both T-statistics in our regression are in between two and negative two therefore telling us they have a low predicative power of success.

Correlation Between Country-of-Origin and Success?

Of the top 50 riders of 2020, 21 are Brazilian, 26 are American, two are Canadian, and one is Australian. Does where a rider is from play a role in their success?

A third regression was run using the country of origin for the riders. The result was not statistically significant. The T-statistic was just beyond negative one which tells as there is a very small amount of predicative power of the country-of-origin variable. However, based on the not statistically significant result, this variable does not appear to play a role in success. This result is confirmed when looking at the second regression. The T-statistic is similar, but we can conclude that country-of-origin does not impact a rider’s ability to accomplish 90-point rides.

Correlation Between Experience and Success?

In a fourth regression, age, years on the PBR circuit, and total number of career outs (one out is one bull) were tested to determine if they are predictors of success. The results show that the number of careers outs are statistically significant in the success of a rider while age has no impact. This makes sense as the more bulls you ride, the better chance a rider has of getting a 90-point score. While the number of years on the PBR circuit is not statistically significant in the results of this regression, it does have a T-statistic close to 2. Because of this, we can conclude the number of years in the PBR has a high predictive power of a rider’s ability to have a higher number of high scoring rides.

The second regression with all the variables confirms total number of career outs is statistically significant while age and years in the PBR are not. Number of years in the PBR still has a T-statistic below negative one indicating some predicative power; however, the result is closer to the second regression compared to the regression with solely age, years on the PBR circuit, and total number of career outs.

The findings from the regressions are supported by further analyzing individual riders in the PBR. Jose Vitor Leme is 5 ft 6 inches, 139 pounds and is currently in his fifth PBR season. He has 58 90-point rides in his career and is a one-time world champion. Silvano Alves, a three-time PBR world champion is 5 ft 10 inches, 150 pounds and is in his fourteenth PBR season, yet he only has 26 career rides over 90 points.

There is no correlation between size, country of origin, or experience when it comes to measuring 90-point rides. This fact keeps the sport exciting. From this study, the only variable that having any impact on 90-point rides is the number of times a rider gets on a bull. The more years a rider is in the PBR, the more career outs they have, which leads to more chances for a 90-point ride. You never know what you are going to get from the bull or the rider. Size, experience, country of origin. None of it matters. It all comes down to skill and praying you can hang on for 8 seconds.

My name is Grace Hanly, and I will be a senior at the University of Oregon this fall. I am majoring in Finance and Sports Business with an Economics minor. I have always had a passion for playing and studying sports, especially soccer, football, and basketball. In addition, I used to spend my summers in Montana attending rodeos and PBR events.