European football is one of the most complex sports, but results come down to two simple concepts: scoring goals and preventing other teams from scoring. However, as the legendary Ballon d’Or winner and Barcelona manager Johan Cruyff once said,

soccer is simple, but it is difficult to play simple.

Every season in every league has teams score fewer goals than they allow, and in most cases, many fewer goals scored than allowed. The goal differential tracks this difference by subtracting goals allowed from goals scored. However, how good (or bad) must a team’s goal differential be to survive in the Big 4 European leagues (English Premier League, La Liga, Serie A, Bundesliga)?

Guaranteeing Survival in the Big 4 Leagues 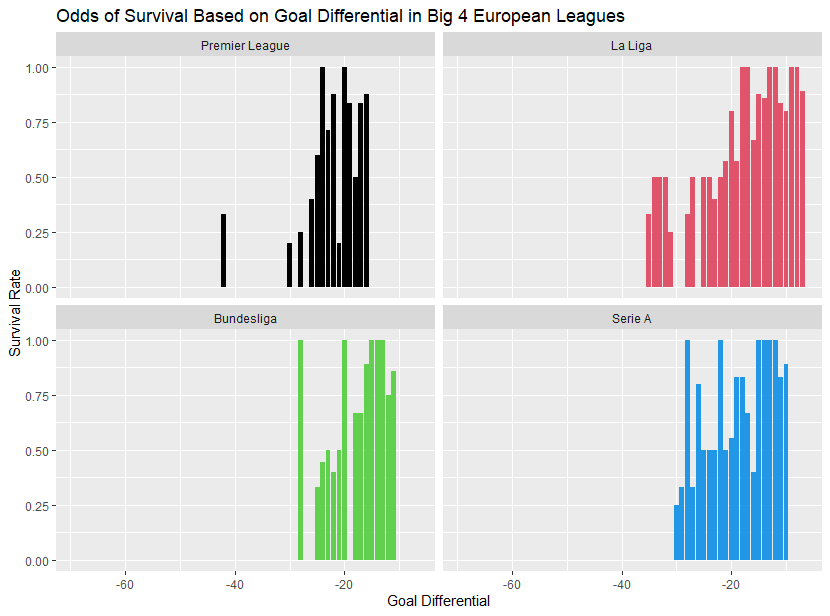 Thresholds for Survival Based on Goal Differential

Determining goal differentials needed to ensure survival is one thing, but plenty of teams have survived without clearing those magic goal differentials. So, how bad can a goal differential get before a fanbase should be worried about relegation? Several thresholds were set based on the percentage of teams that survived at various goal differentials. 50%, 75%, and 90% were the chosen marks for this experiment, as each of those percentages indicates increased levels of confidence and sample sizes prevented higher than 90% for most leagues. 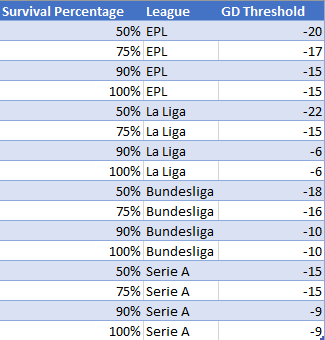 Overall, a team can allow more goals than it scores and still be very confident, if not assured, of its survival in the top flights of the Big 4 European leagues If a team manages to keep its goal differential in the single-digit negatives or greater, the team can confidently plan its top-flight games for the following season. So, for fans of European football, do not be too worried the next time you see your club’s goal differential fall into the negatives; as history shows, there is plenty of space for below-average clubs to survive in European football.