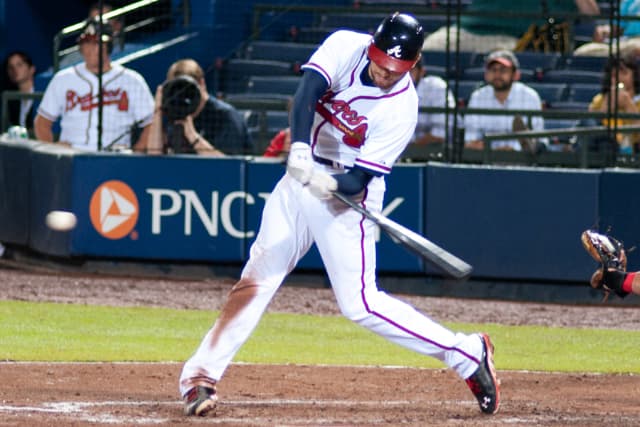 Offensive strategy in baseball has changed a lot in recent years. Power hitting is becoming much more prevalent and is seen as much more valuable compared to the past. A big question in baseball today is whether it is more valuable for a hitter to be a power hitter or a prototypical, high-average hitter. Freddie Freeman and Matt Olson will be looked at as a case study to answer this question, as comparing Freeman and Olson is a big topic of conversation in the baseball world as well. Let’s focus on the 2021 stats for these two players. Both Freeman and Olson were All-Stars and were runner-ups for the gold glove at first base. When looking at the most basic stats, it seems that Freeman has an edge with a .300 batting average and a .393 OBP compared to Olson’s .271 and .371 respective numbers. However, Olson trumps Freeman in the power numbers with a higher homerun total, slugging percentage, and isolated power. We can break down their specific outputs with the following data:

As you can see, Freeman has more singles and runs scored by sizeable amounts while Olsen has more doubles, homeruns, and RBI’s. It is also important to note that Freeman was on a team that had a higher functioning offense scoring 47 more runs than Oakland. This meant that Freeman had more opportunities to score runs and record RBI’s then Olson did, so those numbers might be slightly skewed in favor of Freeman. An interesting thing to note here is that for Freeman, having more singles and a higher AVG and OBP led to more runs scored, while for Olson, higher power numbers led to more RBI’s. Scoring runs and recording RBI’s are equally important, so there is not a huge significance between the two, but it is an interesting trend to see. The question we have to ask ourselves here is what stats or outputs are better representative of the value of a hitter in today’s game. If we look specifically at the count and ratio of the types of hits, it can be inferred that Freeman is more of a prototypical high-average and high-obp hitter while Olsen is more of a power hitter. For this reason, I hope to not only compare these two hitters but also research which type of hitter is more “valuable” in baseball today.

So what stats are the biggest determinants of a hitter’s performance? When we look at the basics, we can look at batting average and on base percentage as far as measuring the prototypical hitter. When it comes to power, I have decided to focus on slugging percentage and another lesser known stat known as isolated power. Additionally, I also want to take a look at OPS, which is slugging plus on base percentage and serves as somewhat of a combination of the 2 types of hitters described above. If we compare Olsen and Freeman based on these stats, we get the table below. 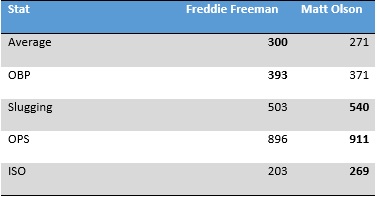 When we look at these numbers, there is an obvious distinction between Freeman and Olson in each of these categories. Again, this shows that Freeman is more of the prototypical hitter and Olson is more of the power hitter. The important thing to note here is that Olson has a higher OPS than Freeman. Now that we have a baseline knowledge of these players, let’s look into how a hitter’s overall performance, output, and value are calculated in baseball statistics today. There are quite a few newly developed stats that were created with the purpose of communicating the overall performance of a hitter. The three specific stats that we will be looking at are wOba, DRC+, and WARP. WOBA stands for weighted on base percentage and basically calculates an on base percentage that accounts for the way the hitter reached base. DRC+ or deserved runs created + is a baseball statistic that measures a hitter’s expected contribution toward all hitting events over the course of a season and measures that hitter’s contribution relative to the average for a certain period of time. Lastly, WARP is a baseball statistic that stands for wins above replacement player, and measures how valuable a player is compared to an average replacement player. With this in mind, let’s take a look at how Olson and Freeman stack up.

These are major stats that shed light on the comparison between these two hitters. According to these results, the comparison is incredibly close, but there is a slight edge to Olson. This seems to suggest that power hitters are valued slightly higher in today’s game but we will dive deeper into the truth below.

In order to determine the importance of each of the basic statistics mentioned above (slugging, ISO, avg., obp, and ops) in reference to the overall value statistics (WARP, DRC+, and WOBA), correlation analysis was conducted. This correlation analysis was run through a database of MLB players and their stats from the 2021 season, and the results give us a solid indication of the significance of the basic statistics in the measure of the value statistics of today’s game. The table below shows the results of this analysis:

As you can see, OPS is by far the most important statistic when it comes to these value measures. This makes perfect sense, because OPS is a blend of slugging and OBP which make up the 2nd and 3rd most significant variables in this analysis. It is super important to note that batting average actually comes in last out of these 5 statistics, which shows that the batting average of a hitter nowadays is just not as valuable as maybe it used to be. If we dive deeper into each stat, we can see that for DRC+ and for WARP, the order of significance is slugging, OBP, batting average, and lastly ISO. However, WOBA is slightly different with the order being: slugging first overwhelming, followed by OBP, then ISO, and lastly batting average. It is interesting to note how much more wOba focuses on isolated power compared to average. That is super interesting and shows that sabermetrics, who developed the wOba stat, puts a huge amount of emphasis on power over average. So, this analysis suggests that power is more valuable in baseball today than batting average.
Even with the power numbers seeming to have a higher significance when it comes to the value of a hitter, Freeman and Olson are incredibly close in those value statistics. In fact, they had the exact same WOBA in 2021. This is worth noting, because Olson has a definite edge in the power numbers compared to Freeman. So, the fact that Freeman and Olson are so close shows that there is much more that goes into these value statistics than the basic stats mentioned above, and it also means that Freeman likely has an edge in those other factors. Another reason for the closeness of Freeman’s and Olson’s value numbers is the fact that average and obp are almost exactly as significant as ISO and Slugging when paired together. The only performance stat that has any kind of significance between those two pairs of stats would be wOba which seems to place a higher emphasis on power output. Overall, we have discovered that power hitters are seen as slightly more highly valued hitters in baseball today. In conclusion, when comparing Matt Olson’s and Freddie Freeman’s stats from the 2021 season, it seems that Olson was a slightly more valuable hitter, and this all goes back to the fact that power hitting is slightly more valuable in baseball today compared to prototypical, high-average hitting.

Author Bio: My name is Garrett Payton. I am a senior Finance major from Suwanee, Georgia. I am pursuing a degree in Sports Analytics with a Finance focus and plan on working in the sports industry, specifically with baseball.