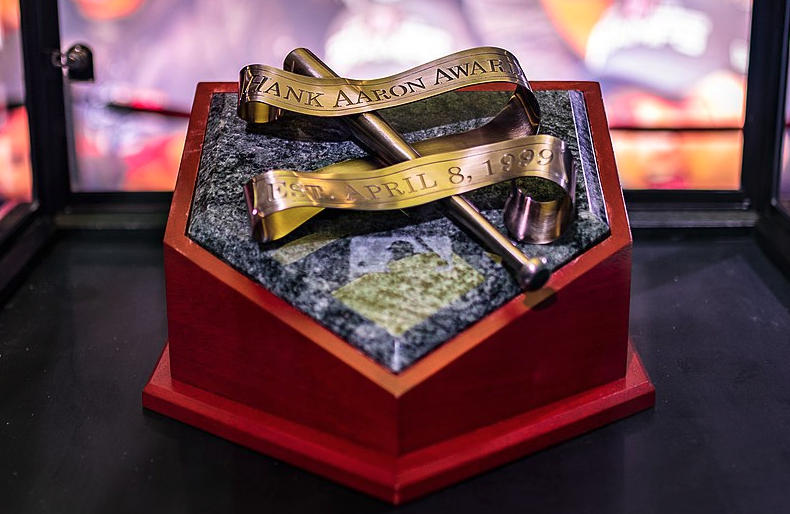 The Hank Aaron Award is presented to the best offensive players in the American and National Leagues each year by the Baseball Writers Association of America (BBWAA). The nominees for the American League in 2021 were Vladimir Guerrero Jr., Marcus Semien, and Shohei Ohtani (Guerrero Jr. and Semien were both teammates with the Toronto Blue Jays). Those nominated for the National League were Bryce Harper, Juan Soto, and Fernando Tatis Jr. Surprisingly, none of the nominees had their team make it to the playoffs this year, which usually is a prominent factor for nomination. Vladimir Guerrero Jr. and Bryce Harper were announced as the Hank Aaron Award winners on November 9, 2021. This was Harper’s second Hank Aaron Award in his career, making him the first player to win on two different NL teams (Starr). Guerrero Jr. and Harper definitely aided, if not carried, their respective teams offensively this year, but arguments can still be made for other players who were in the hunt to win the Hank Aaron Award.

When creating my sample size of possible nominees for the American League, I dropped players based on three categories: plate appearances (PA), batting average (AVG), and wins above replacement (WAR). There were a total of 447 players who had at least one PA with the highest being 724 by Semien (FanGraphs). When decreasing my sample size, I decided to remove all players with <400 PA, bringing the total to 91 batters. Next, I removed all players with a sub .257 AVG to include all of the current nominees. For reference, the lowest BA of all AL Hank Aaron Award winners was Jose Bautista’s .263 AVG in 2010 (baseball-reference.com). Finally, I removed players who had a WAR less than 5 in order to decrease my sample size to ten remaining players.

Next, I looked at specific offensive statistics from the 2021 season for each remaining player and decided which statistics were more important towards offensive production. I narrowed down on home runs (HR), runs (R), runs batted in (RBI), walk percentage (BB%), strikeout percentage (K%), batting average on balls in play (BABIP), batting average (AVG), on base percentage (OBP), slugging percentage (SLG), weighted runs created (wRC+), wins above replacement (WAR), and on base plus slugging (OPS). From the key statistics, I found which players had a top three finish in each category. The charts and graphs below visualize all ten players, the twelve key statistics, and the amount of top three finishes by each player. 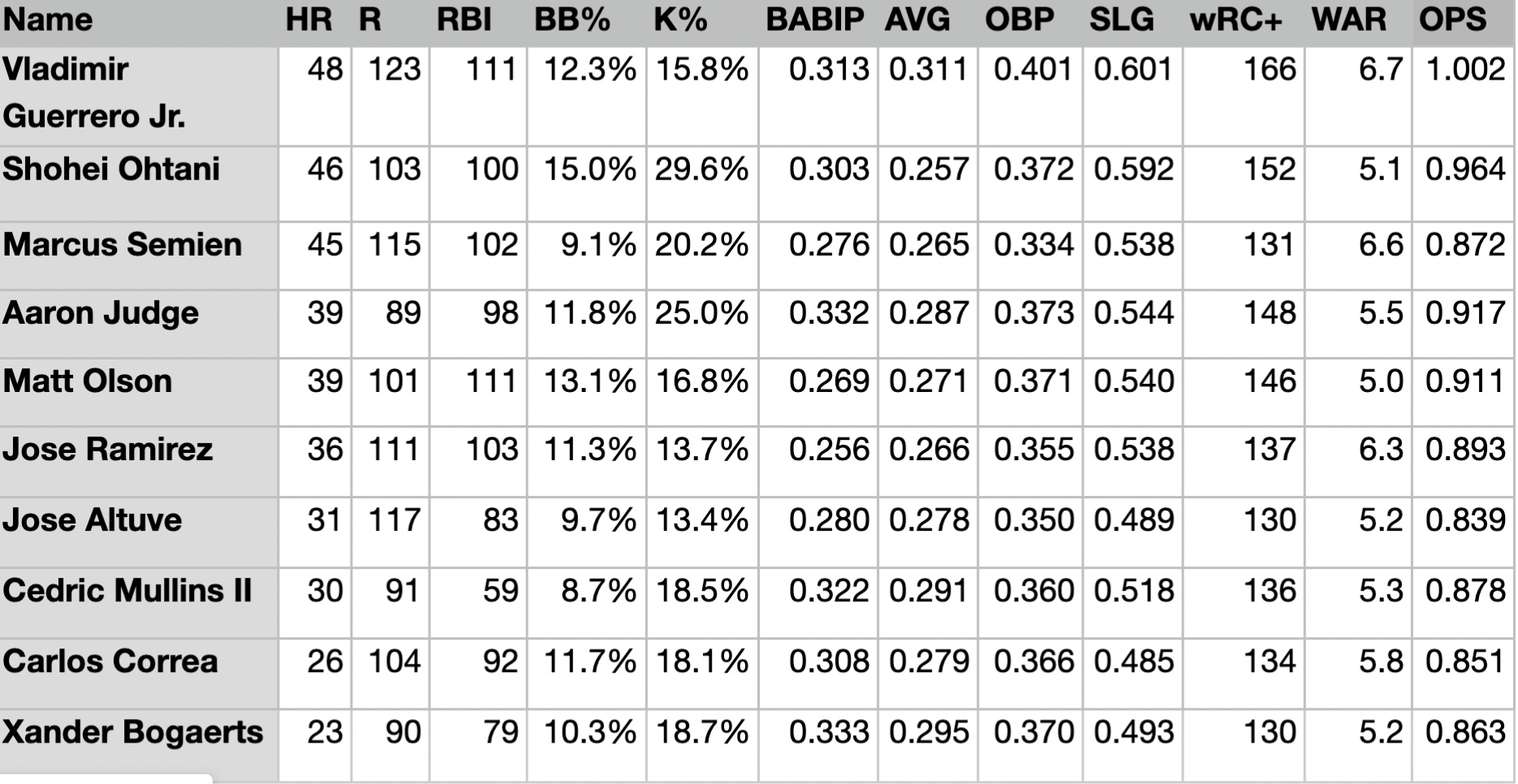 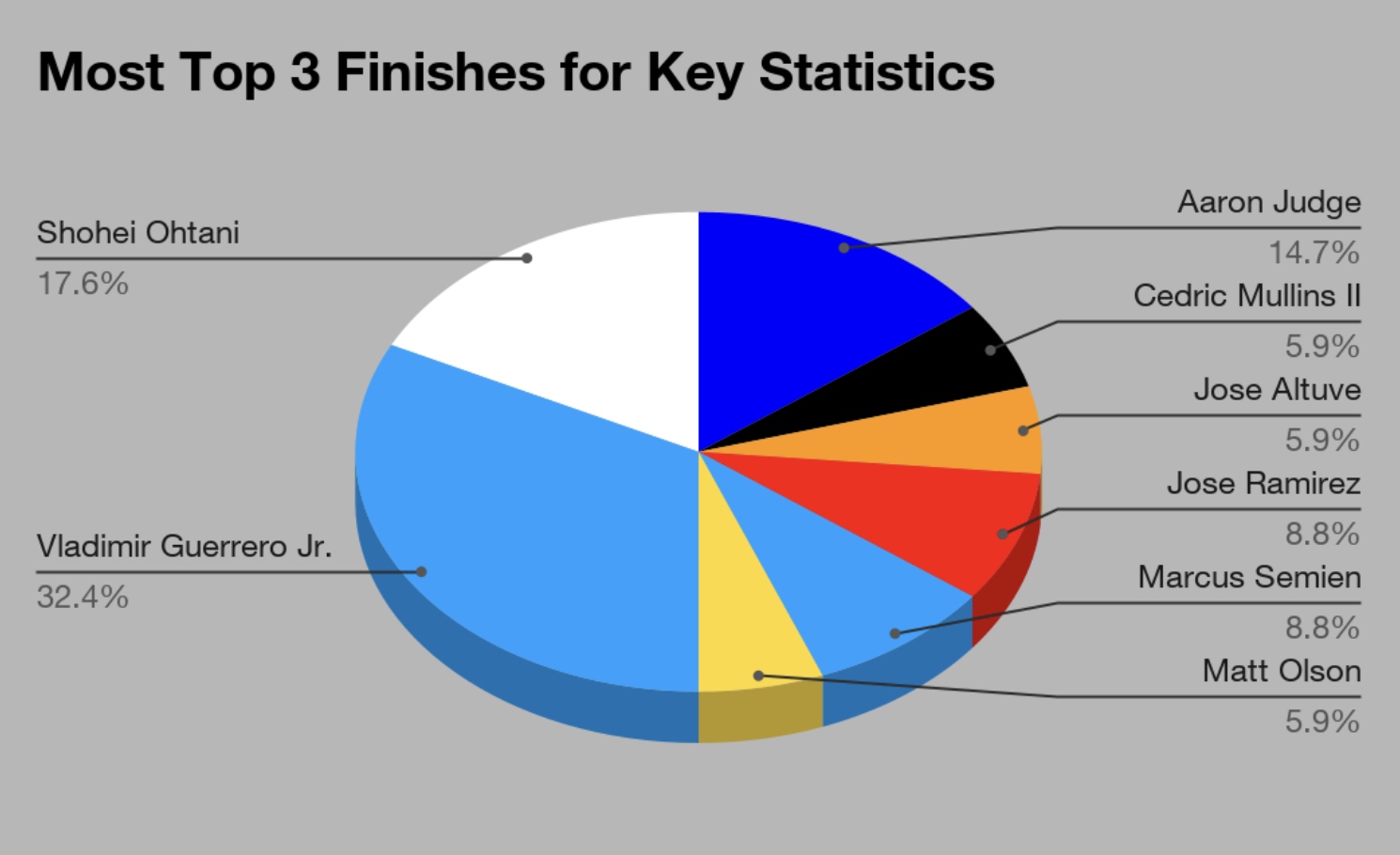 Vladimir Guerrero Jr. is the best offensive hitter in the American League. Guerrero Jr. had eleven top three finishes and was first in nine of them. By leading the sample size as well (as the whole American League) in a majority of the key statistics, Vladimir Guerrero Jr. deserved to win the Hank Aaron Award. Shohei Ohtani deserved his nomination by having six top three finishes. This does not even account for his pitching ability, which contributed to him winning AL MVP a few weeks later.

In my opinion, the other nominee should have been Aaron Judge, who had five top three finishes in comparison to Semien’s three. One reason Semien was nominated instead of Judge was for breaking the single season HR record for a second baseman. He also had a great WAR of 6.6 but a lower AVG, OPS, OBP, BABIP, K%, and BB% than half of the sample size. According to this data, the finalists should have been Vlad Guerrero Jr., Shohei Ohtani, and Aaron Judge with Guerrero Jr. still winning the award.

When creating my National League sample size, I followed nearly the exact same steps as I did for the AL. After removing players with <400 PA, 90 batters remained. The player with the lowest AVG to win the Hank Aaron Award for the NL was Andruw Jones in 2005 with a .263 AVG (baseball-reference.com). Knowing this, I removed all remaining NL players with a sub .263 AVG. Finally, I took out players with a WAR less than 4.5 in order to have ten players remaining in my sample size. Using the same key statistics as the AL analysis, I determined who should have been nominated and won. 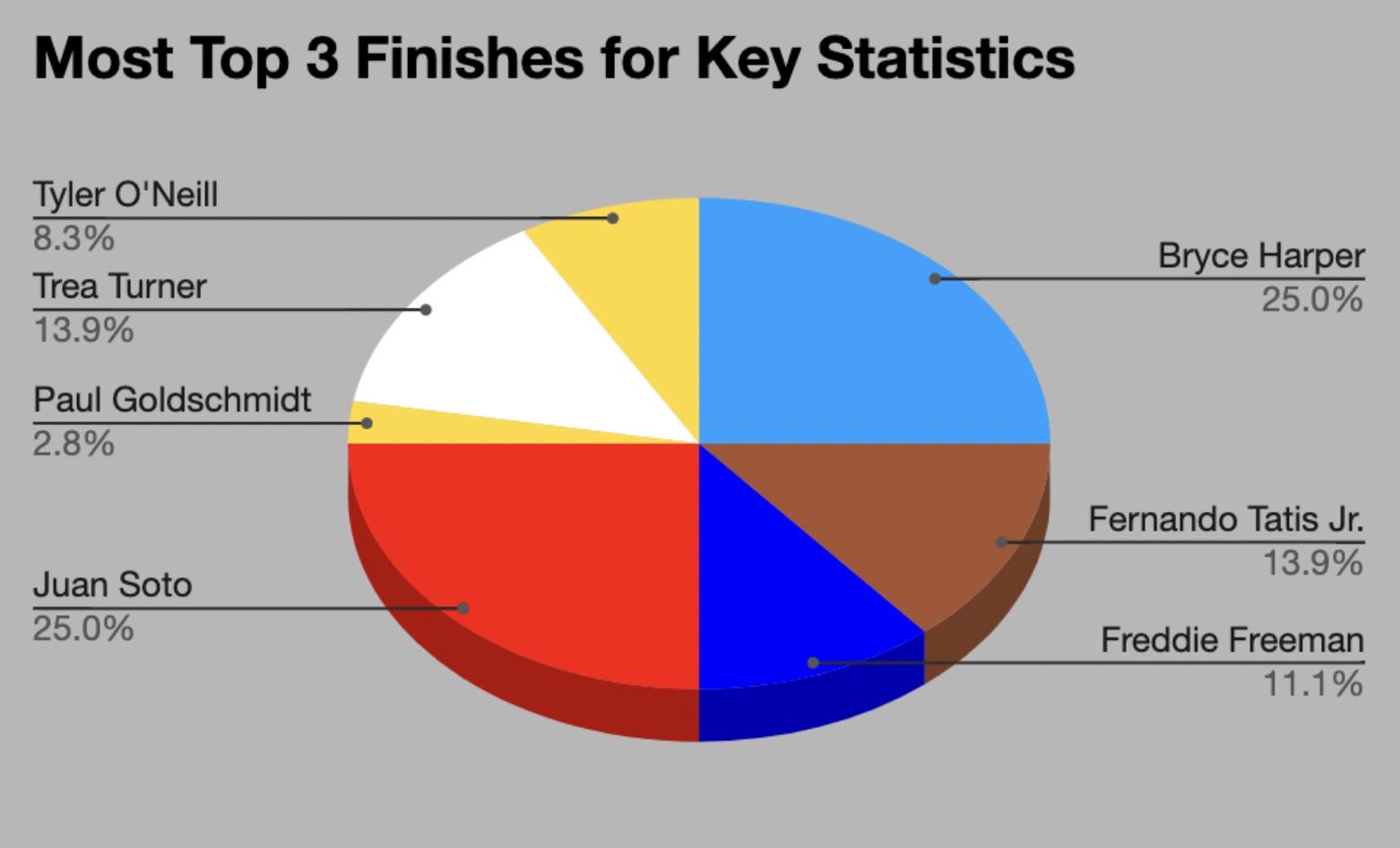 The charts above show there is a tie for the most top three finishes between Bryce Harper and Juan Soto. According to the sample size, Harper was first in SLG, wRC+, and OPS, second in HR, BB%, OBP, and WAR, and third in BABIP and AVG. Soto was first in BB%, K%, and OBP, second in AVG, R, wRC+, and OPS, and third in RBI and WAR. It came down to what is valued more: hitting the ball far to create runs or being disciplined at the plate to get on base consistently. According to the BBWAA, the former was deemed more valuable. Harper won because of the runs he created through slugging and home runs. However, an argument could be made for Soto. Not only did Soto lead the sample in BB%, OBP, and K%, he was first in BB%, first in OBP, and tenth in K% out of the entire NL. No one was better at getting on base than Juan Soto in 2021. 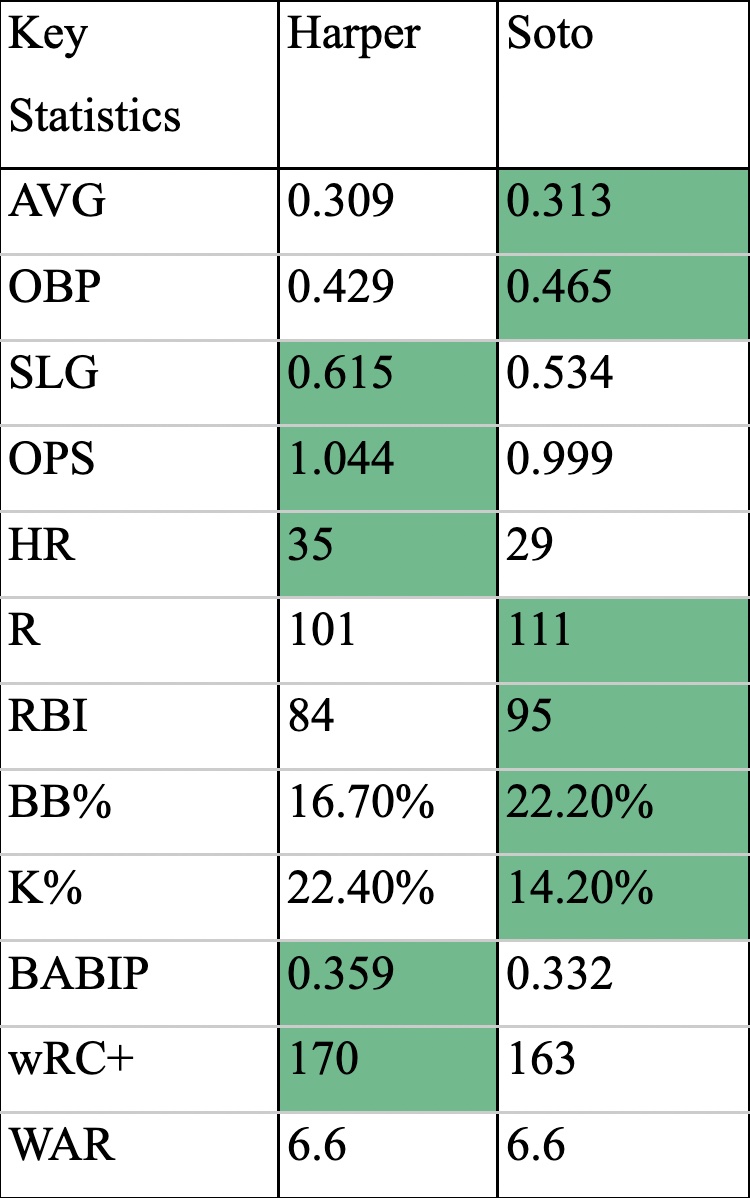 Over their 2021 seasons, Soto outperformed Harper in more key statistics. Even though Soto has a higher AVG, R, RBI, OBP, BB%, and K%, Harper still has the better wRC+, SLG, and OPS. At first glance, Soto seems to have more offensive production. However, the BBWAA still chose Harper to win the Hank Aaron Award. This proves the BBWAA values certain statistics over others. Even though Soto beat out Harper in more key statistics, Harper had the higher stats that meant more to the committee, such as SLG, OPS, and wRC+.

Third and fourth place for the Hank Aaron Award was a tight race as well. According to top three finishes, Fernando Tatis Jr. and Trea Turner were tied with five each. Many were shocked that Trea Turner was not nominated. Not only was Turner 1st in WAR, AVG, and SB in the sample, those led the entire NL. Tatis Jr. was 1st in HR, 2nd in RBI and SLG, and 3rd in wRC+ and OPS. He was also 3rd in the NL in SB. This goes to show that AVG and SB are undervalued in comparison to creating runs. The BBWAA values creating runs and hitting home runs over someone who led the entire National League in AVG, SB, and WAR.

Out of the nominees, Guerrero Jr. and Harper both led in SLG, OPS, and wRC+. Most people would assume the best offensive player of the year to lead in more common stats like AVG, RBI, and HR. While those statistics are good, there are others that carry more weight. According to the BBWAA, there is more value in creating runs than traditional counting statistics.

SLG stands for Slugging Percentage and it shows how many total bases a player reaches in one at bat (Glossary). Home runs boost SLG the most because they represent four total bases. Triples represent three total bases, doubles represent two, and singles represent only one. Guerrero Jr. and Harper led the nominees in this category due to their home runs and extra base hits. OPS stands for On-Base Percentage Plus Slugging and displays how well a hitter can get on base while hitting for average and power (Glossary). If a player has a high slugging percentage, they most likely have a high OPS. This is the case for both winners.

Weighted Runs Created Plus (wRC+) is a statistic that most people do not understand fully. wRC+ normalizes run creation in a way that is translated across all players playing in all ballparks (Glossary). A player with a high wRC+ is able to hit in runs, or create runs, in every ballpark. For example, Matt Olson had the same amount of RBI as Guerrero Jr. (111), but Guerrero Jr. had a higher wRC+ meaning he created more runs through his hitting than Olson. Another example is Juan Soto having a higher AVG, OBP, and RBI, but Bryce Harper having a higher wRC+. This means he consistently created more runs in more pitcher-friendly ballparks than Soto.

2. Storyline/History Could Play a Part

The two winners of the Hank Aaron Award were won by two players with huge stories. Vladimir Guerrero Jr. is the son of nine-time All Star, eight-time Silver Slugger award winner, 2009 AL MVP, and member of the National Baseball Hall of Fame, Vladimir Guerrero. When Guerrero Jr. was called up, most every ardent baseball fan already knew who he was and they all expected greatness. On the other hand, people knew about Bryce Harper from his very first year, taking home Rookie of the Year in 2012 and winning NL MVP twice in his career thus far.

Trea Turner is considered to be a potential snub for not being nominated for the Hank Aaron Award. Not only did he lead the NL in WAR, but he also led in AVG and SB. Stolen bases only help create potential runs for the hitters who are behind the runner on base, so it makes sense that stolen bases are not highly considered for overall offensive production. Batting average is the most standard baseball statistic that can be the most misleading. For example, Trea Turner’s .328 batting average is the highest in the NL, but has a much lower on base percentage (.375) compared to Bryce Harper (.429). Most people would see Turner’s AVG and automatically assume he is the best hitter in the league. That would be only partially true, he could be the best hitter for average in the league but not for other things. If Trea Turner would have replaced Fernando Tatis Jr. as the third nominee in the National League nominees, Turner would have been last in BB%, RBI, HR, OBP, wRC+, and OPS. Although he could hit for average, he could not create as many runs as Harper, Soto, and Tatis Jr. In determining best overall offensive production, driving in and creating runs is key, and Turner just did not do that as well even though his AVG was the highest.

Stolen bases are valuable, but only for the batters hitting behind the player on base. As mentioned above, the great offensive players create runs, not help others create runs. Fernando Tatis Jr. and Shohei Ohtani were the only players with 25+ stolen bases, and potential nominee Trea Turner led the NL in stolen bases with 32. That is impressive, but stolen bases do not create as much value for yourself as they do for other hitters. That is another reason Tatis Jr. was nominated over Turner, for creating more runs. In order to be perceived as one of the best offensive players in your league, you have to hit the ball more and create runs. Stolen bases simply do not create as much value.

About the Author: Braden Murray is a Senior Marketing and Finance student with concentrations in Data Analytics and Sports Marketing at Samford University. He is from Acworth, GA, and is an avid sports fan who cheers for the Atlanta Braves and Oklahoma Sooners.