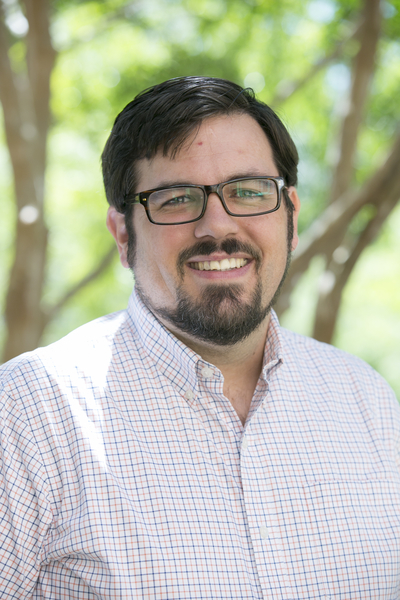 A native of Chattanooga, Brad Bennett has always been fascinated with the living world and how things work. As an undergraduate at the University of Tennessee-Chattanooga (UTC), he followed a path that would lead him to pursue field biology and plant taxonomy. He even served as an intern for the Tennesee River Gorge Trust, helping to catalog plant species in the gorge. As a senior, however, he decided to enroll in a biochemistry course taught by Dr. Thomas Waddell; this changed his path from organismal/ecological to molecular/cellular as now he became fascinated with understanding life at the smallest level. With Dr. Maurice Edwards as a mentor, he also performed plant physiology research, studying germination behavior of Phytolacca americana (American Pokeweed). These two experiences with two exceptional scientists catalyzed Brad’s entrance into basic science research as a career. After graduating from UTC, he went on to earn his Ph.D. in Biochemistry, Cellular and Molecular Biology at the University of Tennessee- Knoxville, under the mentorship of Dr. Chris Dealwis. Here, he learned how molecular structures of proteins were determined, performed enzyme kinetic assays, and helped design new antibiotic lead compounds. After a brief stint as a postdoctoral scholar at Case Western Reserve University in Cleveland, OH, he joined Dr. Mark Yeager’s lab at the University of Virginia, where he learned electron microscopy and worked with important human membrane proteins. His research now focuses on metabolite transport in probiotic and pathogenic species of bacteria. He is also collaborating with Dr. Drew Hataway on the molecular evolution of spider venom.

He teaches Microbiology for the Allied Health Sciences as well as General Microbiology. He also teaches the fall section of Senior Seminar (BIOL 438), with the emphasis on a cutting-edge scientific technology (such as gene editing) and its social/ethical implications. He serves as chair of Samford’s Institutional Review Board (IRB) and as a member of the curriculum committee for Howard College of Arts and Sciences.

For recreation, he enjoys hiking, golfing, cooking, and playing with his kids. He lives in West Homewood with his wife, Kathleen (a physician at UAB), three children, Dottie (8), Thomas (4) and Charles Merritt (1), and two dogs, Rain and Pepper.