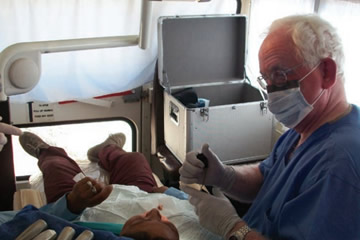 Hugh Brindley at work during a recent medical mission to Mexico

Those who knew Hugh Brindley ‘67 as a Samford student won’t be surprised to learn that the pre-med biology major distinguished himself as a U.S. Navy dentist and is now a maxillofacial surgeon with practices in Cullman and in the Birmingham area’s Saint Vincent’s East hospital.

They won’t be surprised that the young man transformed by his experience in A Cappella Choir became a church choral director and musician, or that their loyal Pi Kappa Phi fraternity brother has turned Rotary Club membership into a life-changing experience for himself and countless others.

Fellow alumni who have lost touch with Brindley might not be expecting the part about “Los Zetas”--the powerful Mexican drug cartel. Or the rat-infested prison where whole families roast together in 120-degree cells. Or the people who live in a landfill. That’s new. That’s the world Brindley has encountered as a medical missionary since 2009.

“I’d been looking for years at different options,” Brindley said of his search for a way to share his medical expertise with those most in need. None of the international options he explored seemed to be a good fit, but then his Trussville Noon Rotary Club began supporting the non-medical mission work of Oneonta, Ala.-based Mega Missions, Inc. Brindley proposed a medical mission to support the group’s work in Ciudad Victoria, Mexico, and in 2009 traveled to the region with 10 other volunteers, none of whom had any medical training. Brindley simply taught them what they needed to know.

On that first trip, Brindley said, the team served 380 people. After returning to the U.S. with photos, videos and testimony about the experience, Brindley attracted more volunteers with more medical expertise. Now he leads teams of volunteers once or twice each year. His most recent group of 25 included at least eight medical professionals, counting himself, and served 975 patients in just a few days.

Brindley said his teams divide their services between the courtyard of a downtown hospital, a mobile unit (an old school bus converted to medical offices) and a prison that almost defies description.

Brindley tells the shocking story of families who live at the Ciudad Victoria landfill, but that’s not the worst of what his mission teams have seen.

The toilets didn’t work when his team first visited the prison that holds many members of the Zetas cartel. The inmates stuffed their noses with missionary toothpaste to mitigate the stench of their quarters. Temperatures outside the prison hit 120 degrees in the warm months and drop only to the 90s in the winter. There is no air conditioning. Families of the prisoners are locked in with them at night. “We’re the only medical care that those people get,” Brindley said.

“Even the bad guys have to have health care,” Brindley said as he told the story of a maximum security prisoner in “nail clawing pain" from a diseased tooth, packed in with others in a stifling cell, with no hope for relief. “It was the closest thing to hell I could think of,”  Brindley said. Brindley, who typically focuses on minor surgery and leaves the dental work to his dentist-colleagues, removed the tooth and the prisoner was stunned into grateful silence. “He just turned around and looked at  me,” Brindley said. “He didn’t know what to say--the look was enough”.

The ongoing clinical work is only the first phase of Brindley’s project. The second phase--Rotary Partners in Health—has his team working with a local Rotary Club in Ciudad Victoria to maintain hospital access and help transfer U.S. medical surplus to the city. “We throw away more stuff in this country than most countries have,” Brindley said of that project. A third phase will pair U.S. volunteers with members of their own profession in Mexico.

Brindley said the violence of Mexico’s drug war constrains the mission to some degree, but he noted that his team is cautious, doesn’t venture into areas of danger and is part of a decades-old mission with established local contacts and infrastructure. At this point, he said, “all you  have to do is show up”.

“It’s hard to explain how it makes you feel, to go in there and be able to help folks who really have no hope of getting any help,” Brindley said of his mission. And so, with the support of Carole Lynn (Fargason) ’96--his fellow alumnus, music partner and wife of 45 years--with his team of volunteers and with his faith as the foundation for it all, he plans to continue his service to the people of Ciudad Victoria. And it’s really no surprise, after all.