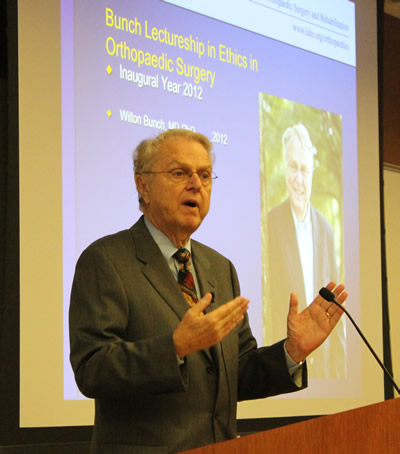 Bunch delivered the inaugural Wilton Bunch Lecture in Medical Ethics in Orthopaedic Surgery Oct. 11 in Chicago. “I was tremendously pleased with this great honor,” he said of the event, “but what meant the most to me was how many former residents and faculty came back for the event.”

Bunch, who holds B.A. M.B.A., M.Div., M.D., and Ph.D. degrees, joined Samford’s faculty in 2000, and has focused on ethics for Beeson Divinity School, Howard College of Arts and Sciences and the University Fellows honors program. His medical career might not be as well known locally, but is no less impressive. His orthopaedic research has included studies of muscle cell membranes, the biomechanics of the human spine, changes in blood flow during anesthesia and changes in electrical activity of the spinal cord during the correction of spinal deformity. He also has been an innovator in the development of surgical procedures.
Samford is a leading Christian university offering undergraduate programs grounded in the liberal arts with an array of nationally recognized graduate and professional schools. Founded in 1841, Samford is the 87th-oldest institution of higher learning in the United States. The Wall Street Journal ranks Samford 1st nationally for student engagement and U.S. News & World Report ranks Samford 37th in the nation for best undergraduate teaching and 97th nationally for best value. Samford enrolls 5,758 students from 48 states and 22 countries in its 10 academic schools: arts, arts and sciences, business, divinity, education, health professions, law, nursing, pharmacy and public health. Samford fields 17 athletic teams that compete in the tradition-rich Southern Conference, and ranks 3rd nationally for its Graduation Success Rate among all NCAA Division I schools.