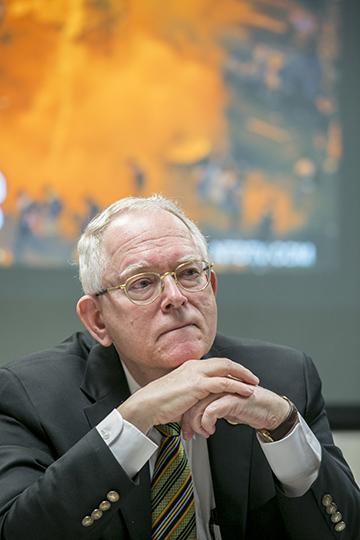 "Unless Chinese leaders reverse course and grant Hong Kong the universal suffrage that was promised in 1997, China’s most international city — and still its leading financial center — faces a future of raucous protest and paralyzed government," Chinese historian Scott E. Colby told members of the Samford Committee on Foreign Relations Nov. 5.

Colby, a stockbroker in Kansas and former teaching fellow at Columbia University, holds a master’s degree in modern Chinese history.  His lecture dealt with the pro-democracy demonstrations in Hong Kong last spring that erupted following the 12th National People’s Congress decision to set election limits for the 2016 legislature. The decision resulted in demonstrations, rallies and other acts of civil disobedience, and the actions of the Chinese government to quell the protests.

In order to understand the present situation, Colby explained, one must understand the past. As a result, he provided a brief history of Hong Kong, Kowloon and the New Territories. He explained how trade with European countries grew, and for two centuries (1640–1840), the balance of trade was favorable to the British with the largest export being tea.

However, when the British learned of the economic impact of opium, they pursued its development, which led to the Opium War.  According to Colby, this was a turning point. The war ushered in a new era in Chinese history and started the path toward modernization. The path was “long, winding and anguished,” Colby said, “owing to China’s unwieldy traditions and years of complacence.”

Consequently, the roots of the present civil unrest lie in the manner by which Britain and China chose to transfer sovereignty over Hong Kong, according to Colby. The Hong Kong government was left out, which led to the protests.

Colby shared news articles from The Wall Street Journal describing the demonstrations and how the Chinese government responded. The Journal wrote: “A new generation of idealistic young Chinese students were sparked to activism by the same heady principles of democracy that inspired the Tiananmen Demonstration of May and June 1989.”

The response from the Chinese government in the People’s Daily referred to the protestors as “anti-China forces . . . a gang of people whose hearts belong to colonial rule and who are besotted with Western democracy.”

Colby noted, however, that Chinese citizens of Hong Kong who convert to Christianity, Protestant or Catholic, become involved in making and breaking both old and new bonds, leading them into the realms of civil society or the public sphere.

Colby was in Birmingham to address the Birmingham Committee on Foreign Relations, which works closely with Samford’s committee to provide knowledge and understanding of foreign affairs, exchange ideas, recognize free speech, and enjoy fellowship and conviviality.
Samford is a leading Christian university offering undergraduate programs grounded in the liberal arts with an array of nationally recognized graduate and professional schools. Founded in 1841, Samford is the 87th-oldest institution of higher learning in the United States. The Wall Street Journal ranks Samford 1st nationally for student engagement and U.S. News & World Report ranks Samford 66th in the nation for best undergraduate teaching and 104th nationally for best value. Samford enrolls 5,683 students from 47 states and 19 countries in its 10 academic schools: arts, arts and sciences, business, divinity, education, health professions, law, nursing, pharmacy and public health. Samford fields 17 athletic teams that compete in the tradition-rich Southern Conference, and ranks 6th nationally for its Graduation Success Rate among all NCAA Division I schools.