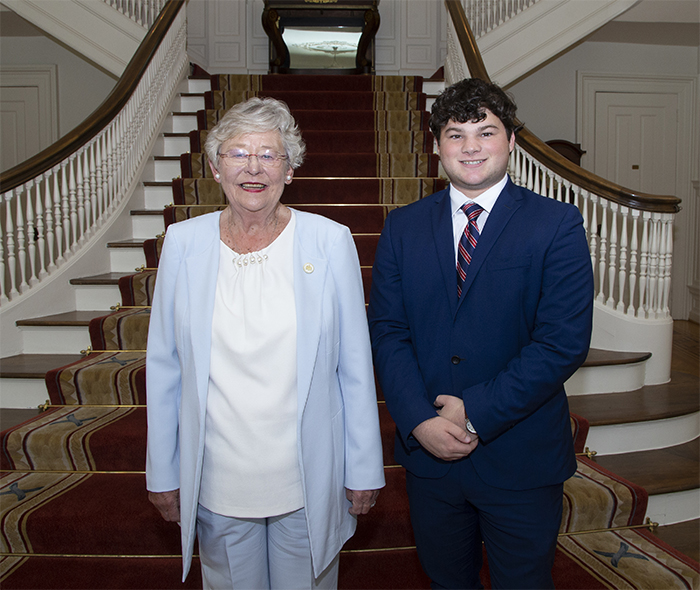 Samford University history major Wyatt Dunn took a significant step toward a career in law, politics or policy with an internship in the Office of the Governor of Alabama this summer.

Inspired by Samford history and political science courses, the Huntsville, Alabama, native simply searched online to see what internships might be available in state government. He applied to the governor’s office and was accepted as one of only six interns distributed around the office’s support divisions.

Dunn worked under Director of Administration Cheryl Fondon, helping staff and other interns with accounting, information technology and travel work, and leading tours of Alabama's capitol. These were new areas of work for him, but he caught on quickly and added valuable skills to his résumé. He got some new ideas about careers, too, and greater insight into his own abilities. “I’m aware of all I’m able to do,” he said.

The other interns in the program, mostly from state public universities, enjoyed friendly competition but praised Dunn’s service during a luncheon with the governor. Meeting the governor there further inspired Dunn, who said he was impressed with Ivey’s attention, authoritative presence and conviction that “if people come together that’s a start, if they stay together that’s progress, and if they work together that’s success.”

Dunn encouraged other Samford students to take advantage of internship opportunities in general, and that one in particular. He wants to see Samford well represented in state government, but he also wants students to discover the great value of internships. “You need all the experience you can get,” he said.