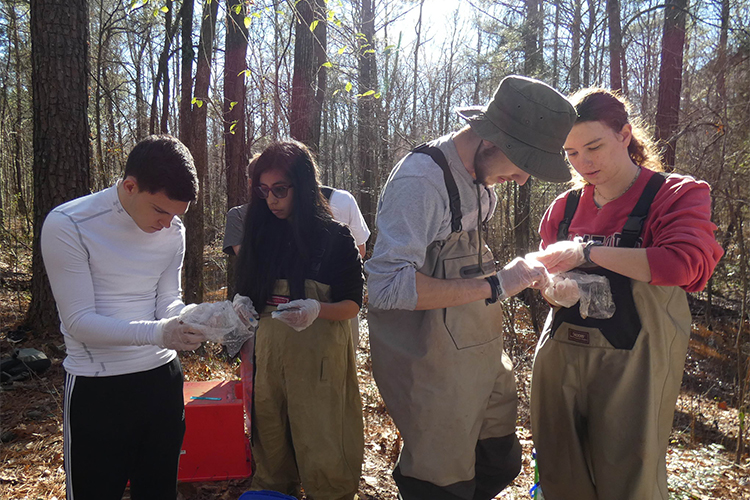 The students visited Wheeler National Wildlife Refuge for a Saturday field trip in January to observe thousands of Sandhill cranes vocalizing, flying and dancing in the marshes and fields around the visitor’s center. Sandhill cranes are among the largest birds in North America, standing almost 4 feet high with a wingspan up to 6.5 feet. The students also saw one of the rarest birds in North America, the even larger Whooping Crane. According to the International Crane Foundation, there are only 802 Whooping Cranes worldwide, with just 81 belonging to the eastern migratory population of which 10 to 15 often overwinter at the refuge. Other trip highlights included four Bald Eagles, numerous Golden-crowned Kinglets, American Coots, Northern Shovelers and Buffleheads. The January start of the semester ensured the class could fully experience the cranes, which start migrating north in February.

In February, some of the students toured the Auburn Museum of Natural History. The group, hosted by Tetrapod Collections Manager David Laurencio, viewed plant and invertebrate collections and learned how vertebrate animal specimens are preserved, catalogued and used in research.

Also in February, the full class caught, measured and swabbed 20 Eastern Newts (Notophthalmus viridescens) at the Ruffner Mountain Nature Preserve Red Pond in February. The work was part of the SNAPS: Student Network for Amphibian Pathogen Surveillance, which gathers data on the occurrence and prevalence of the fungi Batrachochytrium dendrobatidis (Bd) and Batrachochytrium salamandrivorans (Bsal). Both fungi cause the disease Chytridiomycosis, and Bsal is so lethal for Eastern Newts that it could cause their extinction if introduced to the U.S. Bakkegard first discovered the pond as a location for Bd during a 2009 class.

In March, Samford students taught Birmingham Southern students led by professor Megan Gibbons how to do the measuring and swabbing on two additional species – the Slimy Salamander (Plethodon glutinosus) and Webster’s Salamander (Plethodon websteri) in a terrestrial area of Ruffner Mountain near mine # 2. That work was done in collaboration with Sasha Greenspan, a member of The North American Bsal Task Force and a post-doctoral researcher at the University of Alabama.