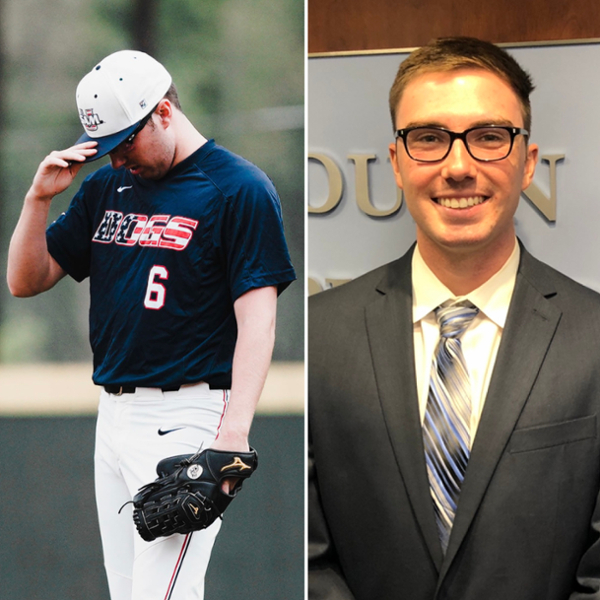 After playing baseball for Samford University and receiving his Bachelor of Science in Business Administration in December 2019, Mathew Bennett has encountered numerous opportunities that are helping shape the future of his career in the business side of baseball. Most recently, Bennett has scored a big-league player development internship with the Charleston RiverDogs, a minor league affiliate of the Tampa Bay Rays organization.
Bennett, who has been around baseball his entire life, knew from an early age he wanted to pursue a profession involving his passion. Having been recruited by numerous schools, Bennett ultimately chose Samford to pursue his baseball career.
“I really wanted to find a school that shared my values in terms of my faith, while also finding a place that would challenge me academically,” Bennett said. After taking personal finance and economics courses at the high school level, Bennett realized he really enjoyed the courses and the challenge they presented, which led to his decision to choose a business-related major.
While studying economics in Samford’s Brock School of Business, Bennett received the opportunity to intern with Scoutcast, a baseball scouting organization that uses data and video analysis to aid in player development and evaluation. Matt Mazzei, associate professor of strategic management and a fellow in Samford’s Center for Sports Analytics, was the faculty member managing the relationship with Scoutcast. Later, Mazzei invited Bennett to partner with him in an independent study for the Center.
“Mathew immediately stood out as an exceptional student in my Business Strategy course,” said Mazzei. “In working with him more through the Scoutcast internship, he shared his dream of working in Major League Baseball. Mathew was the perfect candidate to involve in baseball-related research with the Center. His experience playing Division 1 baseball, his extraordinary work ethic and motivation, and his genuine interest for baseball analytics all played a huge part in his successful projects he did through the Center. I was more than happy to work with him to create a research portfolio that would demonstrate his impressive knowledge and skills in data analytics to potential employers. He continues to work hard and is deserving of every new opportunity that comes his way.”
While working with Mazzei, Bennett contributed to research surrounding the business of baseball and the data behind it. He published several articles on the Center’s blog highlighting his work. One project analyzed and compared new technology being used in player development (“Validating pitchLogic: Assessing the new ‘Smart’ Baseball”). A larger endeavor analyzed geographic and environmental influences that shape player development across the U.S. (“Fields of Dreams: Geospatial Characteristics and Baseball Success (Part I)” and “Fields of Dreams: Geospatial Characteristics and Baseball Success (Part 2)”), offering insights to scouting and recruiting efforts for collegiate and professional teams.
It was through this work that Bennett first landed an opportunity to pursue his passion at the next level. In the spring of 2020, while working with Mazzei, Bennett’s research was highlighted on social media and the R&D Podcast for Driveline Baseball, a prominent data-driven baseball player development organization. Eventually, leaders of Vanderbilt University’s national championship baseball team learned of his work and invited him to intern with their player development and data analysis group. While interning with the Commodores, Bennett began Vanderbilt’s Master of Leadership and Organizational Performance.
Then, in March 2021, Bennett received the call of a lifetime when he was accepted to participate in the internship with the Tampa Bay Rays organization. In his role as an affiliate intern, Bennett will be responsible for technology and data collection in addition to helping with advanced scouting and video processes for the Charleston team, the Rays’ Low-A affiliate.
“The Rays are an industry leader in development, so I’m extremely excited to actively participate in the player development process with such a great organization,” Bennett said.
Following his internship with the Rays, and after completing his master’s degree anticipated in spring 2022, Bennett hopes to land a full-time opportunity with a professional sports organization, preferably baseball.
The valuable experience I gained at Samford, both on the field and in Brock School of Business and the Center, has allowed me to feel confident moving into my role with the Rays,” Bennett said. “I’m very thankful to Vanderbilt and the Rays for believing in me and allowing me to create value in their analytics and player development processes.”
Bennett is among several recent Brock School of Business graduates who have “gone pro” following their Samford experiences. Graduates who have worked for or are working for a professional sports organization include Jordan Bellar ’13 (New Jersey Devils, National Hockey League), Cole Buck ’17 (Birmingham Barons, Minor League Baseball, affiliate of the Chicago White Sox), Molly Olsofka ’20 (Birmingham Legion FC, USL Championship, professional men’s soccer), Jay Mike Johnson ’18 (Tampa Bay Lightning, National Hockey League), Dan Hall ’11 (Portland Trailblazers, National Basketball Association), Clark Dupree ’18 (Indianapolis Colts, National Football League), Brooke Jenkins ’19 (Houston Texans, National Football League), Harrison Regan ’19 (Green Bay Packers and Charlotte Panthers, National Football League). Graduates who will begin work for a professional sports team after finishing their Master of Business Administration at Samford include Ashlee Fincher ’20 and John Brocklebank ’20 who have both secured roles with the Atlanta Hawks (National Basketball Association).
Samford is a leading Christian university offering undergraduate programs grounded in the liberal arts with an array of nationally recognized graduate and professional schools. Founded in 1841, Samford is the 87th-oldest institution of higher learning in the United States. The Wall Street Journal ranks Samford 1st nationally for student engagement and U.S. News & World Report ranks Samford 37th in the nation for best undergraduate teaching and 97th nationally for best value. Samford enrolls 5,758 students from 48 states and 22 countries in its 10 academic schools: arts, arts and sciences, business, divinity, education, health professions, law, nursing, pharmacy and public health. Samford fields 17 athletic teams that compete in the tradition-rich Southern Conference, and ranks 3rd nationally for its Graduation Success Rate among all NCAA Division I schools.
Marketing and Communications Manager
Morgan Black
mblack3@samford.edu
205-726-4753