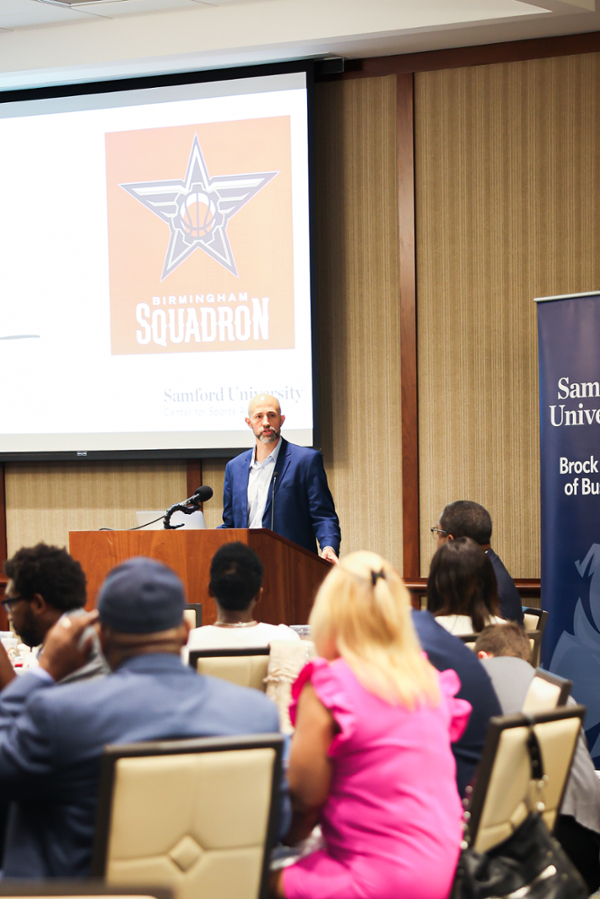 Squadron Head Coach Ryan Pannone addresses the group
On Monday, Aug. 2, Samford University’s Brock School of Business and Center for Sports Analytics partnered to host a lunch event welcoming the newest member of the city’s minor league sports teams, the NBA G League’s Birmingham Squadron, to the community.
In a room designed for building relationships, Cooney Hall’s Regions Community Resource Room, nearly 200 business and community leaders, and even former sports greats such as Jeremiah Castille and Bobby Humphrey, gathered to welcome the team and its leaders to Birmingham.
Following remarks from Samford President Beck A. Taylor, the luncheon featured the introduction of Squadron Head Coach Ryan Pannone and Associate Head Coach T.J. Saint, as well as the newly announced voice of the team, radio legend Eli Gold. David Lane, Squadron general manager of business operations, and Philicia Douglas, Squadron director of sales, also made remarks. All presenters shared the team’s vision of making an impact in the Birmingham community, while also creating opportunities to work with Samford students.
During the lunch, the coaches simultaneously shared their interest in partnering with Samford’s sports marketing program and the Center for Sports Analytics to help the team gain a competitive edge when they begin competition. Such future partnerships will provide Samford students with a new opportunity to obtain real-world experience on the business side of sports.
“To have a community that rallies behind the Squadron and its players is huge for the G League,” Pannone said. “And for us, it’s extremely important to utilize analytics that we feel can impact winning and improvement in our players. We look forward to utilizing Samford’s Center for Sports Analytics to give us an edge over other organizations.”
In the past, Samford students have done work for the Birmingham Barons, the Birmingham Legion F.C., and several college teams, but by having an NBA affiliate team nearby, new doors will open for students interested in working in basketball.
“For our students that want to work in the business side of sports, one of the most important things that they can do is to get real-world experience by working for a sports team while still at Samford,” said Darin White, executive director of the Center for Sports Analytics. “We’ve done a great job of that so far, but this is a whole new league. So many of our students want to work in basketball, and we’re excited to be able to provide opportunities for them in the future.”
The Squadron, the NBA G League affiliate of the New Orleans Pelicans, brings an NBA team to Birmingham for the first time in the city’s history. The Squadron will kick off its inaugural season in November and will play its home games in the newly renovated Legacy Arena. Learn more about the Birmingham Squadron.
The G League, which features 29 teams, is the NBA’s official minor league. The league prepares players, coaches, officials, trainers and front-office staff for the NBA while acting as the league’s research and development laboratory.
Samford is a leading Christian university offering undergraduate programs grounded in the liberal arts with an array of nationally recognized graduate and professional schools. Founded in 1841, Samford is the 87th-oldest institution of higher learning in the United States. The Wall Street Journal ranks Samford 1st nationally for student engagement and U.S. News & World Report ranks Samford 37th in the nation for best undergraduate teaching and 97th nationally for best value. Samford enrolls 5,758 students from 48 states and 22 countries in its 10 academic schools: arts, arts and sciences, business, divinity, education, health professions, law, nursing, pharmacy and public health. Samford fields 17 athletic teams that compete in the tradition-rich Southern Conference, and ranks 3rd nationally for its Graduation Success Rate among all NCAA Division I schools.
Marketing and Communications Manager
Morgan Black
mblack3@samford.edu
205-726-4753