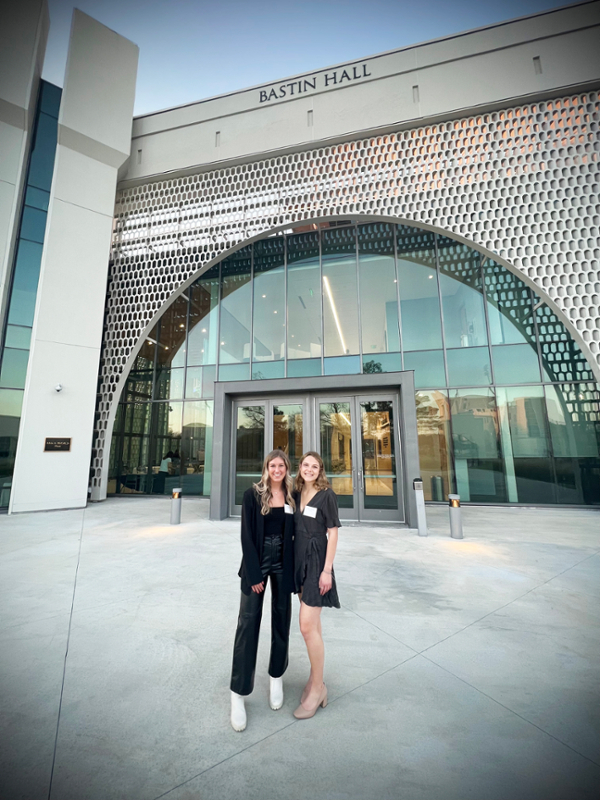 Kylie Pitt, Haley Batson
Samford University student entrepreneurs Kylie Pitt and Haley Batson recently competed in business pitch competitions to help further their business goals. In addition to the opportunity to win cash prizes and have unparalleled networking opportunities with successful entrepreneurs, both students had the chance to spotlight their platforms, which aim to empower women, on large stages.
First, both participated in the inaugural Southern Conference (SoCon) Entrepreneurship Challenge, Feb. 25-26. Hosted by The Citadel’s Tommy and Victoria Baker School of Business in Charleston, South Carolina, the event was designed to showcase students at SoCon schools who have innovative ideas for a business. All 10 SoCon institutions sent competitors to participate in for-profit and nonprofit tracks. The winner from each track was awarded $10,000.
Pitt, a senior marketing major who participated in the for-profit division, presented her business, Revenge The Label, an online clothing store for women of all ages, sizes, shapes, ethnicities and colors. Reflective of her own experiences, Pitt launched Revenge to give power to women who have battled with body image challenges by boosting their confidence with a stylish outfit.
Batson, a senior marketing major and studio art minor, competed in the tournament’s nonprofit track. Her original business, Sunshine & Color Inc., is a specialty company that offers custom watercolor portraits, houses and pet paintings, recreating special memories and moments with friends and family. At the competition, Batson presented a new concept called Imagine, the nonprofit arm of Sunshine & Color through which she plans to launch online communities to provide education and support for young women who struggle, or have struggled, with body image issues, eating disorders and mental illnesses.
Both Pitt and Batson advanced to the final round of their respective divisions. Although they did not win the cash prize, they both walked away with an unforgettable experience and new professional contacts to help grow their businesses and platforms.
Batson said, “I’ve had this idea in my head since senior year in high school about wanting to help people who struggle with these issues and showing them that recovery is possible. I don’t cry much, but standing in front of those judges and crying because they saw the passion I have for my business was really moving. As a nonprofit wanting to make such a huge impact and realizing there are people who want to and can help me is overwhelmingly uplifting. This experience and my new connections really opened my eyes to what can happen next.”
A few days later, Pitt traveled to Chicago, Illinois, where she competed in the national round of the Entrepreneurs’ Organization (EO) Global Student Entrepreneur Awards, March 2-3. After having won the local round hosted by EO’s Birmingham chapter, Pitt received the opportunity to compete against student entrepreneurs from across the country.
During the initial meeting with competition administrators and successful entrepreneurs who served as judges, Pitt and her fellow competitors were encouraged to conduct conversations about each other rather than solely discussing their businesses. Then, they learned about each other’s businesses during the formal pitches to the judges.
Pitt, who launched her business in August 2021, said, “The event was informative and transformative, and it was incredible to be around people who understood how I am feeling as a young entrepreneur.”
After being selected to participate in the final round of the EO national competition, Pitt was the only female chosen as one of the top seven student entrepreneurs in the country to advance to the global competition in May. There, Pitt will compete against the top 65 student entrepreneurs in the world for a chance to win $50,000. In addition, one of the female judges during the Chicago event invited her to apply for a competition solely for businesswomen in technology known as the WMNtech Pitch Competition.
“I really had no idea I’d be in this position a few months ago when I started Revenge,” she said. “I am so thankful for the opportunities I’ve had to share my story and why I’m so passionate about my business. All of this has just inspired me to work even harder.”
Associate Professor Matt Mazzei, the Brock Family Chair in Entrepreneurship, is the faculty mentor for the Samford Startup student business incubator, which both Pitt and Batson are both members of.
“It is such a joy to work with and support students like Kylie and Haley,” Mazzei said. “It is not surprising they have fared so well in these opportunities. They are passionate about their businesses. They find purpose in their missions. They are hungry to learn and grow. They are creative and inspiring. They are the future, and the future is bright.”
Residency in the Samford Startup program is available to all Samford majors with an idea to launch a business.The application to apply for residency is open until April 15. Learn more and apply here.
Samford is a leading Christian university offering undergraduate programs grounded in the liberal arts with an array of nationally recognized graduate and professional schools. Founded in 1841, Samford is the 87th-oldest institution of higher learning in the United States. The Wall Street Journal ranks Samford 1st nationally for student engagement and U.S. News & World Report ranks Samford 66th in the nation for best undergraduate teaching and 104th nationally for best value. Samford enrolls 5,683 students from 47 states and 19 countries in its 10 academic schools: arts, arts and sciences, business, divinity, education, health professions, law, nursing, pharmacy and public health. Samford fields 17 athletic teams that compete in the tradition-rich Southern Conference, and ranks 6th nationally for its Graduation Success Rate among all NCAA Division I schools.
Marketing and Communications Manager
Morgan Black
mblack3@samford.edu
205-726-4753