“This is an historic moment for the NBA and the sport of basketball in Africa, and we are excited to work with such a broad range of partners to make this game possible,” said Amadou Gallo Fall, the NBA’s vice-president and managing director of Africa. “The game will impact young people throughout the continent, both on the court and in the community, as we bring some of the world’s most recognizable athletes to Johannesburg to celebrate our long tradition in Africa.’”

The National Basketball Association (NBA) announced that they are going to play their first game in Africa on August 1, 2015. The game is going to be held at Ellis Park Arena in Johannesburg, South Africa. According to Mwakilishi, the announcement was made at a press conference in Johannesburg by Gallo Fall, the Hon. Minister of Sport, Fikile Mbalula, and the United States Ambassador to South Africa, Patrick S Gaspard. Gallo Fall spoke about the growth of basketball in Africa, and how the NBA playing in South Africa will help basketball to grow even bigger in the continent. They are very grateful and thankful for the Player’s Association and the teams who have committed to be part of this historic event.

Mwakilishi said the game will feature Team Africa verse Team World, and it will be in support of the Boys and Girls Club of South Africa, The Children’s of Villages Association of South Africa, and the Nelson Mandela Foundation. He explains that Team Africa will include NBA players from Africa or NBA players who are second generation Africans while the Team World is made up of players from the rest of the world. 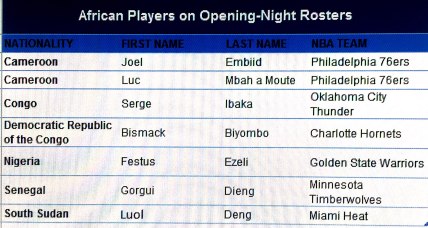 Chris Paul of the Los Angeles Clippers will serve as Team World’s captain. He is eight time NBA All Star, NBPA President. Chris Paul said “I look forward to representing Team World in the first NBA game in Africa. It will be my first visit to the continent, and I cannot wait to contribute to the growth of the game on and off the court”

Luol Deng of the Miami Heat, from South Sudan, will serve as Team Africa’s captain. Deng commented, “I am extremely proud to be a part of the NBA’s first game in Africa…. Coming from South Sudan and having participated in the Basketball without Borders Africa camps in Johannesburg previously, I am truly honored to be part of this historic event.”

I think the NBA in Africa is a great thing that the National Basketball Players Association are doing to promote basketball in Africa. I think that it is going to motivate a lot of the kids in Africa to have more interest in basketball. All of these athletes, coaches, and others associated with the NBA will give the African kids someone to look up to in hopes that the kids will continue to play basketball after the game is over and the NBA leaves. I also think the organizers are doing a great job. According to Mwakilishi, NBA executive coaches, general managers and legends will also partake, and some that are included are 2014-2015 NBA Coach of the Year, Mike Budenholzer of the Atlanta Hawks, Brooklyn Nets coach, Lionel Hollins, Brooklyn Nets General Manager Billy King, NBA Global Ambassador, Dikembe Mutombo, NBA Africa Ambassador Hakeem Olajuwon , San Antonino Spurs coach, Gregg Popovich, NBA Commissioner Adam Silver, Boston Celtics coach, Brad Stevens, Toronto Raptors General Manager Masai Ujiri, and the new Orleans Pelicans coach, Monty Williams.

Commissioner Adam Silver said the NBA have worked hard to grow the game of basketball in Africa, and is excited to take the next step of playing in Africa. He also praised the NBA players on their tremendous effort, and everyone is looking forward to sharing the NBA experience and the values of the game with fans in Africa.