SEC and College Football: Is it Still the Dominant Conference?

The Southeastern Conference (SEC) has historically been seen as the dominant conference in college football for years. With an SEC team winning eleven of the last twenty FBS National Championships, including winning seven championships in a row from 2006 to 2012, it is easy to understand why the conference has its dominant reputation. However, in recent years, the Big 10, Big 12, ACC, and Pac-12, the other four “Power Five” conferences, seem to be creeping up on the SEC in terms of competitiveness and domination.

Which Power Five Conference Has Most U.S. Fans?

According to a 2015 study on the Sports Business Research Network (SBRnet), the Big 10 had the highest percentage of people who chose a team in the conference as their favorite. The study asked U.S. fans to choose their favorite football team and lists the teams in order of the percentage of people who chose that team as their favorite. Ohio State ranks first with 5.8 percent of Americans ranking the team as their favorite team with fellow Big 10 member Penn State in second with 4.3 percent. All fourteen Big 10 teams combined represented 26.8 percent of America’s favorite teams with the fourteen SEC and ACC teams representing 18.9 and 15.2 percent, respectively. The ten teams in the Big 12 and twelve teams in the Pac-12 represent 9.1 and 14.1 percent, respectively. Measuring the dominance of these five conferences based on U.S. fandom, it would seem that the Big 10 has a significant advantage compared to the other four power conferences. The chart below demonstrates these statistics. 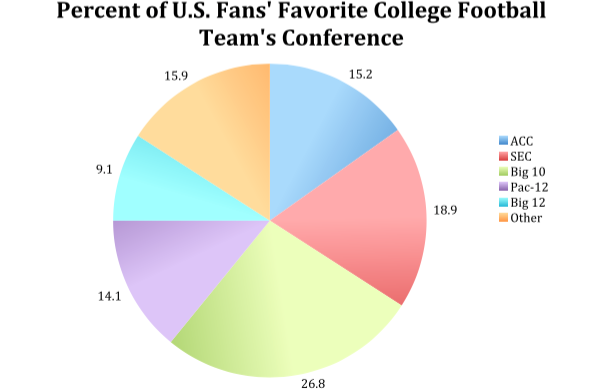 How do the Power Five Conferences Match-up in College Football Revenues? 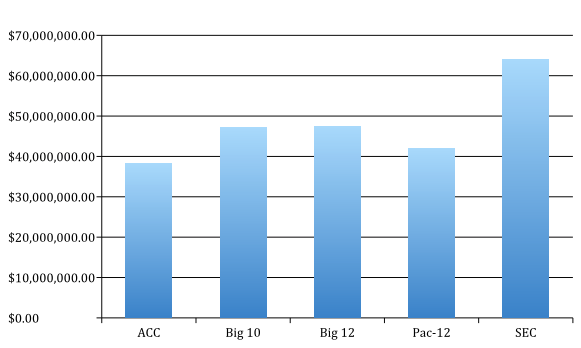 So is the SEC Still the Dominant Conference in College Football?

Based on rankings, fandom, and revenues, the SEC overall still dominates the college football world, but other conferences, especially the Big 10, are becoming strong competitors with the SEC. Talent-wise, while the SEC may have more teams ranked in the AP Top 25, the Big 10 has very strong teams based on rankings. Additionally, the Big 10 seems to have more favorite teams in their conference, but SEC fans seem to be more passionate and invest more money into their teams based on the amount of money SEC teams earn per year compared to other conferences. Only time will really tell if the SEC will continue to be seen as the dominant conference in college football.