Hansen and Singletary: Names to Know for 2018 CFB

Players emerge every college football season who exceed any expectations set of them. Because of the quick, four-year turnover in players, stars are created and then graduate in what seems like no time at all. It can be difficult for a casual fan to keep track of who is dominating, and most of the attention goes to athletes on teams with the best record or who play at the most historic schools. However, there are plenty of exciting players outside of these media darlings who deserve the attention of the public. Two of the best offensive players in college football came from outside the Power 5 Conferences, and they’re both coming back this season. Quarterback Justice Hansen of Arkansas State and running back Devin Singletary of Florida Atlantic were two of the most valuable players last year and will likely continue with this success in 2018.

During the spring of 2015, Justice Hansen entered a quarterback battle with Cody Thomas, Trevor Knight, and Baker Mayfield at the University of Oklahoma.  After it became clear to him that he would not be starting over the future number one overall pick, Mayfield, Hansen transferred to Butler Community College for a year before ending up at Arkansas State. The 2017 season saw Hansen break almost every Arkansas State record and establish himself as one of the premier quarterbacks in the Division I football. Below are tables of the percentage of the entire team’s yards accounted for, total yards per game, and points per game. Hansen is top three in all three categories and the only returning player on the lists besides Milton and Locke. Additionally, White, Jackson, Benkert, Rudolph, and Mayfield were all drafted in the 2018 draft. 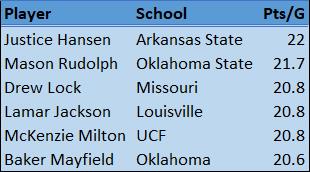 One of the reasons Hansen was so successful was that he posed a threat with his legs (415 yds rushing, 7 TDs) as well as his arm (3,967 yds, 37 TDs). Hansen was the fourth best dual threat quarterback in the country coming out of high school and uses these skills to his advantage at Arkansas State. There’s also reason to believe that the numbers will get even better in 2018. Arkansas State is returning most of their offense, including a “series of mountainous targets: 6’6 Justin McInnis, 6’5 Kendrick Edwards, 6’3 Omar Bayless, 6’3 Jonathan Adams Jr. (Another Oklahoma transfer, 6’5 Dahu Green, also becomes eligible in 2018.) Mighty-mite running back Warren Wand is also back; so are four of ASU’s five starting linemen” (Connelly). While he doesn’t get the hype of other returning quarterbacks like Will Grier, Drew Locke, Khalil Tate, Hansen has the weapons to put up huge numbers that should be among the best in the country, barring injury. 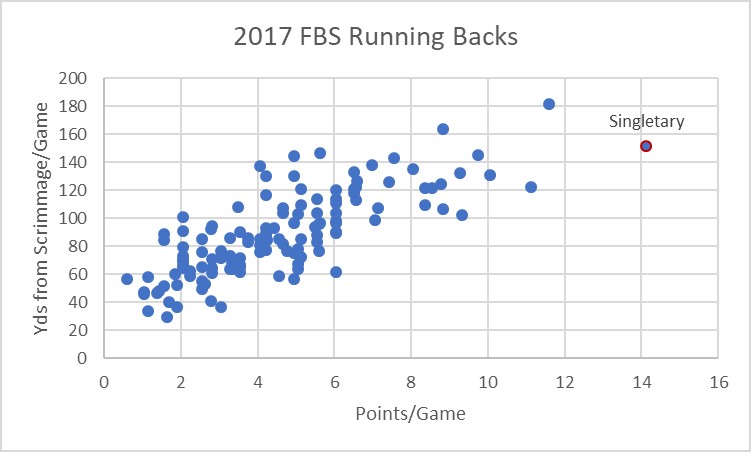 As the 1,926th ranked prospect (265th in Florida) by the 247 Composite rankings, Devin Singletary entered Florida Atlantic University (FAU) with low expectations from the public about his possible contributions to the team. All he’s done since enrolling is rush for 1,021 yards and 12 touchdowns as a freshman and 1,918 yards and 32 touchdowns as a sophomore. The 32 rushing touchdowns are the third most all time in a season behind Barry Sanders (37, 1988) and Montee Ball (33, 2011). He finished with 33 total touchdowns, 8 more than the second highest non-quarterback, Rashaad Penny from San Diego State. According to PFF College, “Singletary finished 2017 No. 2 nationally in missed tackles forced on carries last season and No. 2 in total breakaway yards among returning FBS running backs with 917 total yards gained on breakaway runs (15+ yard runs)” (FAU Bio).

Head coach Lane Kiffin has certainly helped with Singletary’s development and has compared him to two of the Heisman trophy running backs he’s coached, Reggie Bush and Derrick Henry. While it’s highly unlikely Singletary will win the Heisman at a Group of 5 school, there has been some preseason push to increase his chances.

Both players seem to be in good positions to repeat, and possibly even surpass, the success that they experienced last season. Each of their names have appeared on many of the awards watchlists that have come out, but without historic performances, they will likely be looked aside because of the lower level of competition. A game to keep an eye on for Hansen would be week 2 when Arkansas State plays at Alabama. Even if they lose, it’ll be interesting to see how they match up against such a dominate defense. For Singletary, FAU plays Oklahoma in week 1 and UCF in week 4. These games are both against high profile teams that could boost Singletary’s Heisman campaign with strong performances.