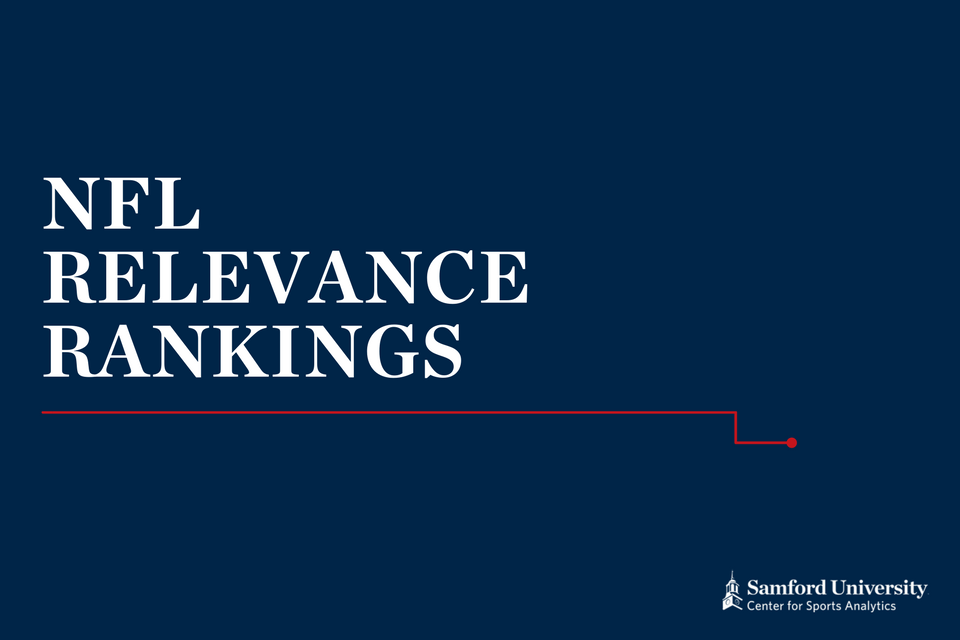 For the past few years, the National Football League (NFL) has been struggling from a fan perspective. Mired in multiple controversies – national anthem, concussions, defining a catch – the NFL has experienced consecutive declines in both fan attendance and TV ratings, while still netting approximately $14 billion in revenue.

As recent as this past summer, only 35 percent of Americans held a “favorable view” of the NFL, which was down from 57 percent since the previous August. NFL viewership fell in 2016 and continued its decent with a 10 percent decline throughout the 2017-18 season.

Despite all of the negative press, there are some signs of life beginning to show for the country’s most profitable professional sports league.

Samford University’s Center for Sports Analytics in partnership with Affinio released its updated NFL Relevance Rankings, which are based on a deep dive into social media data from over 7 million U.S. sports fans. Utilizing machine learning and artificial intelligence, the rankings accurately convey how emotionally connected fans are to their respective teams and leagues. The latest update reflects changes from the midpoint of the 2017/2018 NFL season to the midpoint of the 2018/2019 season. 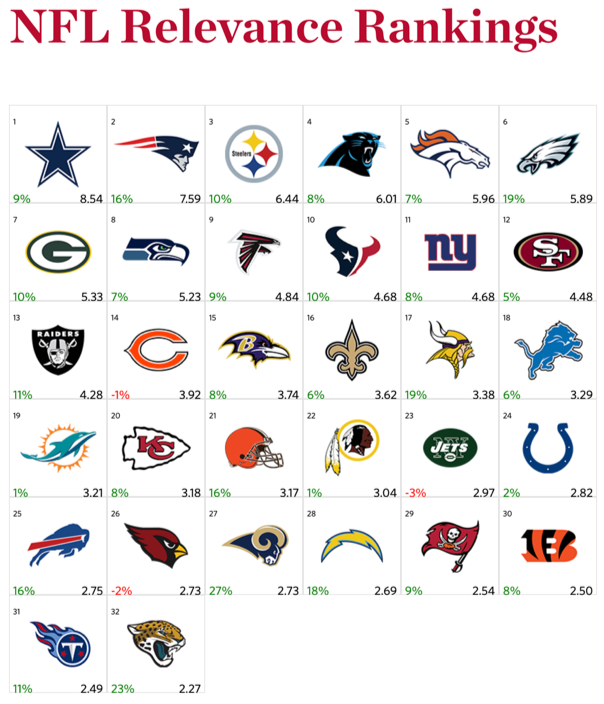 The league as a whole, according to the rankings, experienced a 9.38 percent increase in relevance from the middle of last season to the middle of this season. Click here for the full rankings.

According to Darin White, Executive Director of the Center for Sports Analytics at Samford University, “Social media data typically trends ahead of other forms of analysis when measuring cultural trends. An increase in relevance of this magnitude in a one-year period is almost unheard of in social data. Thus, we feel confident that the NFL has turned the corner and weathered the storms of the past few years.”

This data is further supported by the encouraging viewership numbers from the beginning of the season. Compared to the opening day of games in 2017, television ratings jumped 29 percent for CBS games, with 17.1 million viewers tuning in for regional matchups throughout the day. The audience for Fox’s regional games grew five percent and the national game was up one percent.

Expectations heading into the 2018 season were pessimistic to say the least with reports suggesting the NFL would likely see viewership numbers continue to decline, perhaps even surpassing the 10 percent decline from last year. However, it’s clear based on early season ratings data and the strong social media data from Samford’s NFL Relevance Rankings that the league is well-positioned for a successful season.

Social media data, in particular, can be a strong indicator of what’s really going on from a cultural perspective. As Adweek points out, “social media data is a remarkable source of unsolicited, unbiased consumer data. Interest and interconnectivity trends can help creative markets “collect dots” in social spheres where they have no experience, no exposure and no gut feelings to rely on.”

And with the league experiencing overall increases in relevance, it’s no surprise that that same success is extending to the team-level as well.

In the latest NFL Relevance Rankings, 12 NFL teams experienced double digit increases in relevance from the beginning of last season until today, and only three teams did not increase in relevance.

The biggest winner in the updated rankings is fittingly the lone remaining undefeated team so far in the 2018 season. The Los Angeles Rams experienced a 26.98 percent increase, which is interesting given the traditionally negative impact moving from one city to another can have on a team and its fan base. Clearly, the on-field success of the Rams, coupled with budding superstars like Todd Gurley and the front office’s shrewd fan engagement moves, have led to significant progress.

In terms of raw percentage increase, the Jacksonville Jaguars also saw a significant uptick in relevance with an increase of 22.70 percent – good for the second highest in the league. The increase, however, failed to improve the team’s overall standing in the league, keeping the Jaguars in last place.

The hapless Cleveland Browns boast a 16 percent increase, but more impressively, have climbed four spots in the newest rankings (No. 25 to No. 21), which was the biggest positional gain of any NFL team. On their way to No. 21 they passed the Arizona Cardinals, Washington Redskins, Indianapolis Colts and New York Jets.

Speaking of the Jets, they experienced the largest decline of all 32 NFL teams, despite being located in the largest TV market in the U.S. The team’s three percent drop earned them a three-spot slide from No. 20 to No. 23. The Jets, however, are poised to regain relevance in the coming years with standout rookie quarterback Sam Darnold under center.

Filling out the other two spots as the only teams to experience a decline were the Cardinals and Chicago Bears. While the Bears held steady at No. 11, the Cardinals dropped three spots to No. 27 as the team continues in an obvious rebuilding year.

The top three teams were the usual suspects, headed up by the Dallas Cowboys and then followed by the New England Patriots and Pittsburgh Steelers.