Does the SEC Offer the Best Fan Experience in College Football?

When fans try to argue which conference offers the best fan experience the almost unanimous answer is the SEC. The South Eastern Conference, within the past fifty years, has gained the reputation as one of the most exciting conferences in all of college football. In the great words of Kirby Smart, “When you talk about the SEC, you never get a chance to rest.” This conference includes one of the most dominant dynasties in the history of all of college football in the Alabama Crimson Tide. The Crimson Tide have won National Championships five out of the last ten years. In addition, they were ranked number one, in the entire country, for a record breaking one hundred and six straight weeks. Who wouldn’t want to jump on the bandwagon of such a dominant team? The conference also includes other powerhouse teams like Auburn, LSU, Georgia, and Mississippi State, who all consistently have winning records and make multiple bowl game appearances.  A unique trait about the SEC as a whole is each university seems to have their own distinct culture and tradition. Some of these traditions include the “Woo Pig Sooie” chant of Arkansas, the cowbells of Mississippi State, and the “gator chomp” of the university of Florida. These traditions are passed down through families and appear to be the center of attention for SEC fans on Saturday afternoons.

This article will statistically break down how the SEC offers the best fan experience in all of college football. We will first look at the toughest stadiums for visiting teams to play in and the loudest fan bases throughout college football. Then we will evaluate the most popular traditions for teams. Lastly, we will observe how the SEC can utilize the recruiting front to boost fan experience. As you read through the article the topics will be further explained in detail. 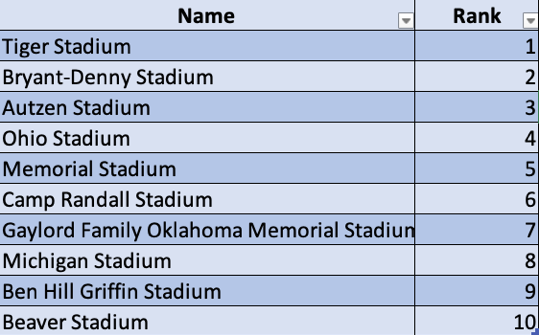 The table above shows the top ten toughest stadiums to play in, for visiting teams, for all of college football. We can identify that three of the top ten stadiums represent the SEC conference. These stadiums are Tiger Stadium or also known as “Death Valley” for LSU, Bryant-Denny Stadium for Alabama, and Ben Hill Griffin Stadium or “the Swamp” for Florida. We can take from this data that the fans are what makes each of these environments tough for visiting teams. On the other hand, they also motivate the home team toward success which ultimately boosts fan enjoyment. 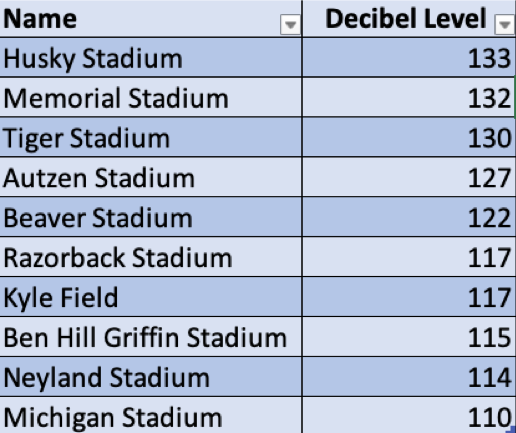 This table illustrates the fan bases that generate the loudest noise level, measured in decibels, for their universities. As we can see five out of the top ten loudest stadiums in all of college football represent the SEC, with LSU holding the number three spot. This data proves that the atmosphere in these SEC stadiums has proven very difficult for away teams to win. Consequently, the more energy a fan base has the more it will attract other people to try and join it. One portion of the fans that especially adds to the loudness of a SEC football stadium is the student section. They are a relentless distraction to the other team and are usually the epicenter of all the energy and noise. 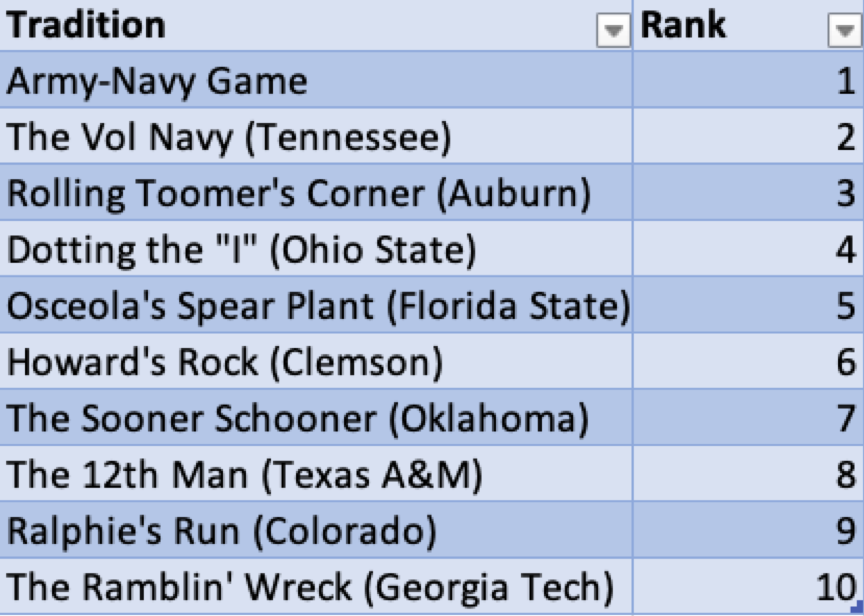 The table above shows the top ten traditions in all of college football. As we can see the SEC holds three out of top ten spots with Auburn, Texas A&M, and Tennessee. The traditions of a university prove to be the most memorable part of a fan experience at a game. A tradition is what inspires a fan base and incorporates a random group of people together to cheer on a sole team. A big aspect of SEC football tradition is the short greetings one fan will say to another. Some of these greetings include “war eagle” for Auburn, “roll tide” for Alabama, and “hotty toddy” for Ole Miss.  The traditions of SEC teams are some of the oldest and most sacred in all of football. 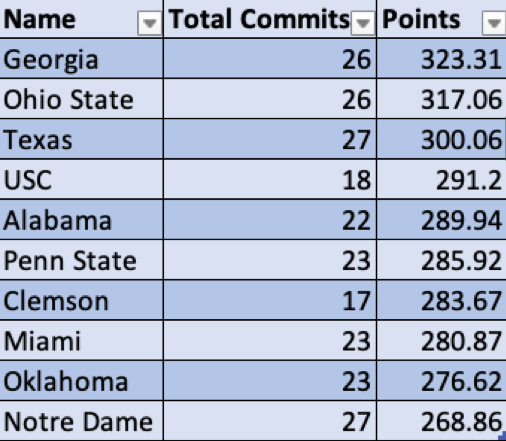 The table above displays the top ten recruiting classes for college football in 2019. The rankings are conducted based on the total amount of points each school receives throughout the recruiting process. The point total is calculated for each team using a formula based on the number of stars each player is given, as they commit or sign with a team. As we can see from the data, there are two SEC teams in the top ten for recruiting classes already. The two teams are Georgia at number one and Alabama at number five, which both have proven to be the most dominant teams of the SEC. Georgia already has seven 5-star and fifteen 4-star commits for its 2019 recruiting class. Alabama on the contrary, has two 5-star and only thirteen 4-star recruits committed.  Recruiting is not only a vital part of the team’s success, but it also is a crucial aspect toward the fan experience. A team who has a lot of talent will attract more fans to the games and consequently, make the game environment more enjoyable.

As we look through these statistics, we can gain an understanding for why the SEC would possibly present the best fan experience in college football. What makes a college football team fun to cheer for, despite a winning tradition, are a loud atmosphere, a core school tradition, and solid recruiting. A college football school that incorporates all three of these aspects usually becomes memorable and popular to cheer for by fans. Every team within the SEC provides all of these aspects both on the campus and in homes across America.

Hale Williamson is a rising junior at Samford University, where he is double majoring in Marketing and Management with a concentration in Sports Marketing. He has enjoyed following and studying sports since a young age and looks forward to learning more about the industry every day.