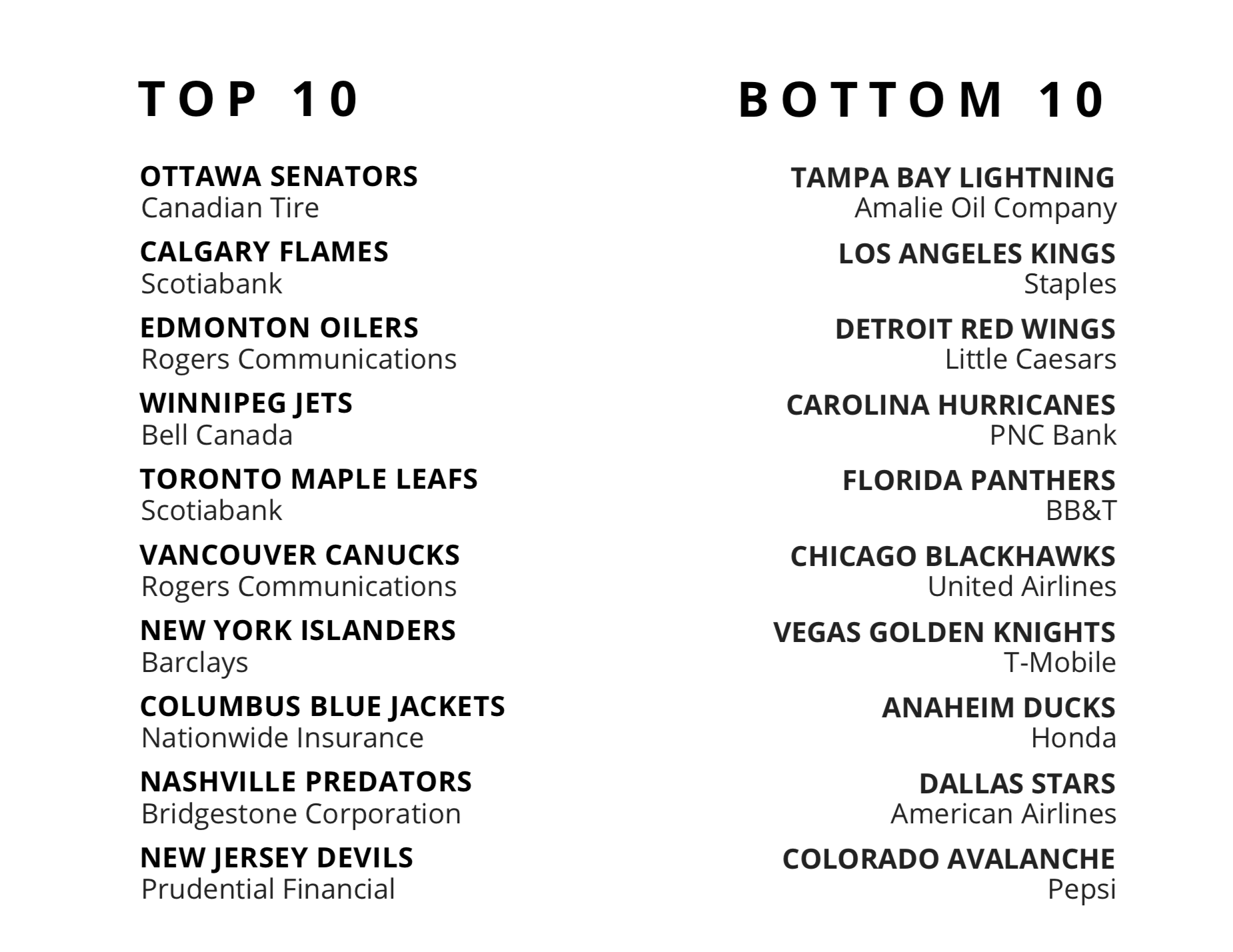 The contributing factors to success are based on the independent variables in the regression, distance, sponsor category, and sponsor size. Five of the top ten teams are located locally. As seen across all professional leagues, sponsors headquartered locally perform the best and have the highest percentage difference in mutual followers between the team and the league. Sponsors in the Automobile industry performed the best within the NHL data set, closely followed by sponsors within the financial services and banking industries. Noticeably different from other leagues, the leading sponsors in the automobile industries are Canadian Tire and Bridgestone Corporation, both tire companies. Sponsors in the beverage industry performed the worst, as primarily dictated by Pepsi, the title sponsor of the Colorado Avalanche. Nationally-known sponsors performed the best within the NHL, consistent with the results across all leagues. The top six teams are all sponsored by companies with a national reach. But, all six teams are located in Canada, and their sponsors are therefore recognized by Canadians and not Americans. This could be a potential bias that would contribute to the success of these sponsorships and separate them from US-based teams. There are also no locally known title sponsors of an NHL team.

Across all professional leagues, teams based in Canada consistently performed well and had a large percentage increase in followers from the league base as compared to other teams in the same league. Within the NHL, the top six hockey sponsorships are from teams located in Canada. Below is a comparison of each Canada-based NHL team and their mutual followers for each Canadian titled sponsor. The height of the line on the graph below is the number of mutual followers between each team and sponsor. For Scotia Bank, Rogers Communications, and Bell Canada, we see near the same number of followers regardless of the team they also follow. While Canadian Tire has the most followers from the team they sponsor, the Ottawa Senators, they still received a significant number of followers from the followers of the other five Canadian teams.

For title sponsorship in the NHL, teams located in Canada performed the best, holding the top six spots within the list. These sponsors had the largest increase in followers between the base of NHL league followers and followers from the team they sponsor. Using Twitter followers as a measure of success, sponsors headquartered locally see the highest increase in followers from their sponsored team when compared to sponsors headquartered further away. Sponsors in the automobile industry, specifically producers of auto parts, found the most success within the NHL and sponsors of beverage companies performed the worst. Internationally recognized teams tend to have low levels of success and typically found more followers from the base NHL follower than from the followers of their sponsored team. Areas for future research would stem from the weakness found in the location bias. Looking at team followers that are not located in the same city as the team would provide the opportunity to eliminate the bias found for sponsors located near their team.