Should the NBA Eliminate the One-and-Done Rule?

The NBA and the National Basketball Players Association claimed that they were acting in young athletes’ best interest when they raised the league’s age limit from 18 to 19. The organizations believed that players who were drafted straight out of high school had trouble adjusting to the NBA, and the “one-and-done” rule would give future players more time to develop their skills and physically mature before entering the draft.

The purpose of this article is to determine whether or not raising the age limit did, in fact, smooth young players’ transition to the NBA, so we will be comparing the first 5 years of prep-to-pro players’ professional careers with the first 5 years of one-and-done players’ professional careers. Specifically, we’ll look at the 28 U.S. high school seniors who were drafted in 2001-2005 and the 36 college freshmen who were drafted in 2006-2010 (the one-and-done rule was implemented prior to the 2006 NBA draft) and see if there are any noticeable differences in the players’ salaries, number of playoff appearances, and number of All-Star games. For the sake of brevity, I’ll refer to NBA players who were drafted right out of high school as “high school seniors” and NBA players who were drafted immediately after their freshman year of college as “college freshmen.”

The table below shows how much money the high school seniors and college freshmen were paid during each of their first 5 seasons in the NBA, on average.

I anticipated that the college freshmen would earn significantly higher salaries than the high school seniors given the marketability of well-known college athletes and the NBA’s ever-growing salary cap, but there was a relatively small difference between the high school seniors’ and college freshmen’s average annual salaries during their first 5 years in the NBA. This implies that the year that players were required to spend out of high school as a result of the one-and-done rule did not drastically change general managers’ valuation of the young athletes.

Players who enter the NBA at the lowest draft-eligible age are wildly talented, and general managers add them to their rosters because they predict that the stars will help their teams win games and, ultimately, advance to the playoffs. The chart below shows what percentage of the high school seniors and college freshmen made 0-5 playoff appearances during their first 5 years in the league. 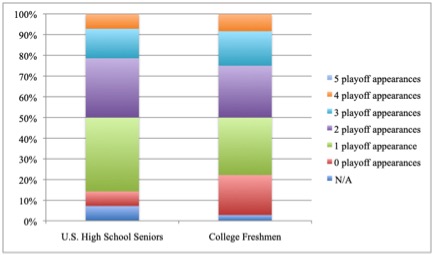 *N/A accounts for NBA draftees who didn’t play a single season in the league.

Every February, 12 players from the Eastern and Western Conferences are selected to compete in the NBA All-Star Game. Being named an All-Star is an incredible honor granted to only the best players, and athletes normally have to spend several years developing their skills in the league before they’re deemed worthy of the All-Star title. That being said, the players who get drafted at the lowest draft-eligible age are expected to become All-Stars within their first few NBA seasons due to their immense talent.

We’d expect college freshmen to be named All-Stars more often than high school seniors because the one-and-done rule was designed, in part, to better prepare individuals for the level of competition they’d face in the NBA. The chart below confirms our suspicions by revealing that college freshmen were more likely than high school seniors (19.5% vs. 10.8%) to play in at least one All-Star game within 5 years of joining the league. In this regard, the one-and-done rule is somewhat effective when it comes to helping young athletes find success early in their professional careers. 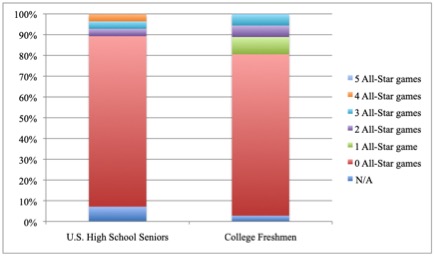 *N/A accounts for NBA draftees who didn’t play a single season in the league.

Overall, the differences between the college freshmen’s and the high school seniors’ salaries, number of playoff appearances, and number of All-Star games were insignificant. Therefore, I believe that the one-and-done rule should be eliminated and 18-year-old players should be allowed to declare for the NBA draft right out of high school.