Throughout this article, we will look at how well a team’s naming rights sponsor is performing. We will do this using Zoomph Twitter data and analyze followers of a certain team’s affinity for a certain brand compared to MLB fans in general, as well as on a competitor basis. I will note before we begin that Chicago Cubs sponsor Wrigley did not have a Twitter account, plus 7 MLB ballparks do not have true sponsors. Given that, these 8 teams were not analyzed.

Whew. That’s a lot, but we made it through the order one time.

The best performing sponsor of all was Globe Life for the Texas Rangers, who had a massive spread of 2044.66. This is most likely because Globe Life owned the naming rights to the Rangers’ old stadium starting in 2014 and have been at the forefront of the newly constructed Globe Life Field, which just opened two years ago.

Guaranteed Rate places third among MLB naming rights sponsors with a spread of 1408.53. This high spread is likely due to the low affinity rate for Guaranteed Rate’s competitors, as well as the low excitement of the industry. For instance, people will more than likely have a higher affinity toward a tech company than a mortgage company such as Guaranteed Rate.

Defending World Series champs Atlanta Braves and Truist bank come in at fourth in this metric, with a spread of 900.51. This number is due to the fact that among hardcore MLB fans, only 2 people registered as following Truist and one of those was a hardcore Braves fan. It is interesting to note that while direct competitor Regions had a much lower indexed affinity, Regions’ general affinity among Braves fans dwarfed Truist’s in size.

While Toronto was number 5 on this list, the affinity was likely skewed towards Rogers and their fellow Canadian telecom companies since the Blue Jays are the lone (MLB) ranger in the Great White North.

For roughly 40 years of its existence, RingCentral Coliseum was known as the Oakland Coliseum, and people still view the venue in this lens. The A’s partnership with business communications brand RingCentral just began in 2019 and it shows through the negative 2.24 spread. Athletics fans also have roughly 4x the affinity for RingCentral’s competitors than MLB fans do in general, adding fuel to the fire.

The Cincinnati Reds also saw zero hardcore fans following Great American Insurance Group, even though the home office can be seen in the Cincinnati skyline from the stadium bleachers. Their spread of negative .74 is the second worst in the league. 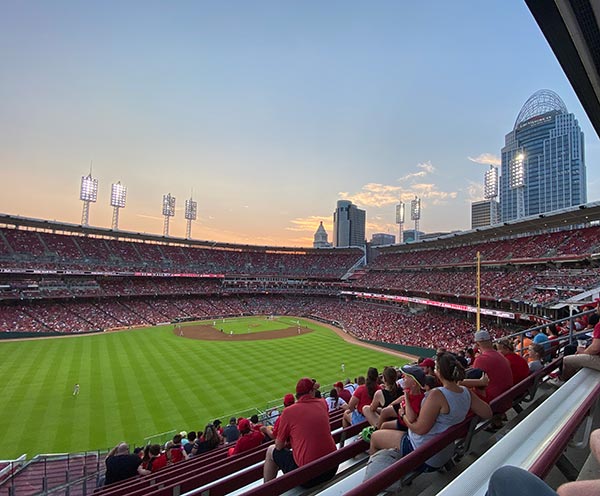 While the Mariners saw a high affinity for their naming rights sponsor T-Mobile, competitors Verizon and AT&T also performed well and closed the gap between the sponsor and the average affinity for competitors.

Best – Oh, Almost Forgot … Cue “Take Me Out to the Ballgame”

Again, with the exception of the Toronto Blue Jays, who have a higher affinity for competitors based out of Canada; these are the 3 best performing teams in general affinity for the market sector.

You may be thinking, I just saw the Twins in the worst partnerships by spread, how could they be in the best sector? While Target, the naming rights sponsor of the Minnesota Twins had a large general affinity among MLB and Twins fans alike - their competitors Walmart and Amazon saw large affinity numbers as well. Twins fans had an average competitor affinity of 4.85%, the largest of any naming rights sponsor sector analyzed. This high average, however, cancelled out the large numbers Target saw, bringing the Minnesota-based brand’s overall gained value down.

Interestingly, Oracle and their tech competitors such as Amazon Web Services and Microsoft had a high general affinity among MLB and Giants fans with a 2.13% and 1.59% affinity, respectively. Along the same lines, the Telecom/Wireless Carrier segment also performed well, seen through T-Mobile’s partnership with Seattle that saw a 4.8% average affinity for T-Mobile among Mariners fans.

The A’s and Ring Central make another visit in the worst of the worst category – this time for worst general affinity. This is explainable though, because these business communications accounts do not have many followers in comparison to sectors such as financial or retail.

While the insurance sector does have some companies with a fairly good affinity, the Cincinnati Reds and Milwaukee Brewers’ naming rights partners underperform compared to competitors. American Family Insurance, sponsor of the Brewers, has an affinity of less than .2% among MLB fans. Great American, sponsor of the Reds, actually performs worse. The company didn’t register but 15 followers among hardcore MLB fans, which is an affinity of .006%.

Both the Tampa Bay Rays and Houston Astros have companies known for orange juice as their naming rights sponsor. General affinity among the sector is low at roughly one half of a percent, as compared to other sectors such as retail, which is around 7.5%.

While household names such as Progressive and Minute Maid have a good indexed affinity, those recognizable brands are likely to have a fairly good affinity score without paying a dime. The brands that seemed to perform best in indexed affinity were hyper-regional (a non-household name). These brands all seem to have the goal of gaining brand awareness on a national scale and not the goal of gaining brand recognition for repurchase. These brands included Guaranteed Rate (White Sox), Comerica (Tigers), Globe Life (Texans), and Truist (Braves), among others.

Besides the two teams (Marlins and Reds) that had zero affinity among hardcore fans, the other two lowest indexed sponsors in comparison to MLB fans affinity were T-Mobile with the Mariners, and RingCentral with the A’s. Both naming rights sponsors had less than a 1.5x indexed affinity, and multiple brands performed better than RingCentral in the indexed category among A’s fans.

Top of the 9th – Cross-Comparison of Competitors

Although the Tampa Bay Rays sponsor Tropicana has only a 2.1 indexed affinity among Rays fans, Minute Maid has a score of 4.6 in the same metric among Astros fans. This sizeable jump, however, can’t be taken at face value. Rays fans have zero affinity for Minute Maid, while the Astros fans have a .3 indexed affinity for Tropicana. So, round one - Minute Maid. Round two, Tropicana. Let’s settle this by going to the best indicator of total value – the spread. Here, the Astros beat out the Rays in value generated with a score of 21.61 compared to the Rays’ 5.18. Winner, Houston.

On the surface, the hardcore Cardinals fans’ jump of over 30% in general affinity for Anheuser-Busch’s competitors doesn’t look too good, but upon further inspection, many of these are actually subsidiaries of the parent company. These subsidiary brands such as Budweiser (2.95 indexed affinity), Michelob Ultra (1.71 indexed affinity), and Busch (3.4 indexed affinity) show the power of a long-lasting naming rights sponsor – one that’s lasted through multiple ballparks dating back to 1966.

Bottom of the 9th – In Conclusion

While some partners are hitting a home run with their sponsorships, others are leaving the bases loaded. Securing the right partnership is easier said than done, but if you fill out the lineup card correctly, both the team and sponsor hit it out of the park. That’s why it is imperative that teams and companies alike are constantly analyzing data which will be beneficial for both entities to ensure a partnership that will last for years to come.

Marshal Smith graduated from Samford University in December of 2021 and plans to pursue his master’s here at Samford once his diagnosis of Crohn’s disease/Ulcerative Colitis is in remission. He plans to work with a major sports franchise in marketing or data analytics. Here is a link to his LinkedIn profile: www.linkedin.com/in/marshalwsmith