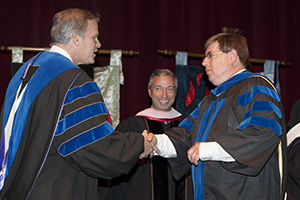 Provost J. Brad Creed praised Todd’s leadership in building a thriving classics program—celebrating its 15th anniversary this year–that is the envy of many schools throughout the nation

"He has built a robust major, attracted outstanding students and faculty, and played an integral role in developing a classically-oriented core curriculum," said Creed, adding that Todd "conveys a contagious enthusiasm for the literary and cultural achievements of the past." More students are enrolled in Greek and Latin courses at Samford than at many schools five times its size, he said.

A Phi Beta Kappa graduate of Furman University, Todd holds a Ph.D. from Vanderbilt University. He and his wife, Dr. Candy Todd, who teaches in the Samford mathematics department, have four children.

The Buchanan Award includes a silver tray, a lapel pin and a $1,000 cash prize. Finalists for the award were nominated by members of the 2012 graduating class.
Samford is a leading Christian university offering undergraduate programs grounded in the liberal arts with an array of nationally recognized graduate and professional schools. Founded in 1841, Samford is the 87th-oldest institution of higher learning in the United States. The Wall Street Journal ranks Samford 1st nationally for student engagement and U.S. News & World Report ranks Samford 37th in the nation for best undergraduate teaching and 97th nationally for best value. Samford enrolls 5,758 students from 48 states and 22 countries in its 10 academic schools: arts, arts and sciences, business, divinity, education, health professions, law, nursing, pharmacy and public health. Samford fields 17 athletic teams that compete in the tradition-rich Southern Conference, and ranks 3rd nationally for its Graduation Success Rate among all NCAA Division I schools.