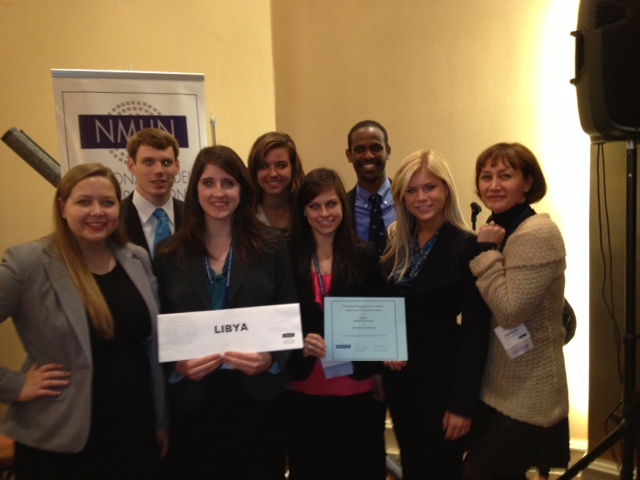 The inclement weather from Hurricane Sandy did not deter Samford University's Model United Nations team from celebrating success at the 2012 national competition Oct. 26-28 in Washington, D.C.

The team received the honorable delegation award for their performance in representing the Republic of Libya, which faculty advisor Serena Simoni called "a very difficult task, given its major political transitional phase."

The team competed against 70 other universities from around the world. NMUN volunteer staff members recommend 10 percent of the delegations in their respective committees for awards, based on performance.

"Although five of the seven team members were new, they were impressive and their seriousness and competence were evident to all the participants and organizers," Simoni said.

The team's return to Birmingham is delayed because of the weather, but Simoni said in an email to the campus that she anticipated a Nov. 1 return.
Samford is a leading Christian university offering undergraduate programs grounded in the liberal arts with an array of nationally recognized graduate and professional schools. Founded in 1841, Samford is the 87th-oldest institution of higher learning in the United States. The Wall Street Journal ranks Samford 1st nationally for student engagement and U.S. News & World Report ranks Samford 66th in the nation for best undergraduate teaching and 104th nationally for best value. Samford enrolls 5,683 students from 47 states and 19 countries in its 10 academic schools: arts, arts and sciences, business, divinity, education, health professions, law, nursing, pharmacy and public health. Samford fields 17 athletic teams that compete in the tradition-rich Southern Conference, and ranks 6th nationally for its Graduation Success Rate among all NCAA Division I schools.