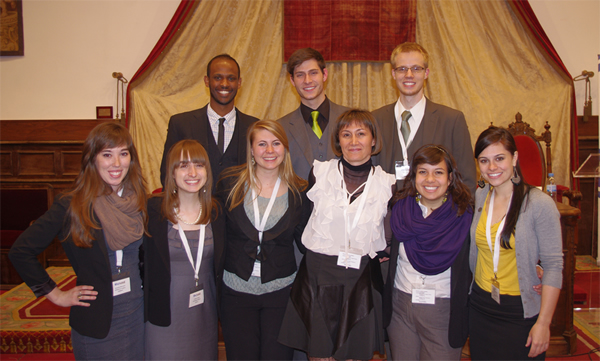 Samford's Model United Nations team returned from Spain this week with top honors from an international Model UN simulation hosted by the University of Salamanca.

The March 15-25 trip included rare access to the inner workings of Spanish government. Former Prime Minister of Spain José María Aznar arranged for the Samford group to be received at the Foundation FAES as well as the Government Palace and Congress.

In addition to Aznar, the team met with leading researchers in politics and economics, and with Ildefonso Castro, National and International Security Advisor to the current Spanish Prime Minster, Mariano Rajoy.

"Needless to say, when our students told about these visits to their Spanish MUN fellow delegates, they were overwhelmed by questions, since even for Spaniards it is not easy to obtain this type of access," said Samford Model UN advisor and political science professor Serena Simoni.

At the MUN simulation in Salamanca, Simoni said, every member of Samford's team received personal awards.

Andrew Mays was invited to apply for a committee chair position at another MUN event in Cluj-Napoca, Romania, in the Fall 2012. If accepted, his trip would be funded by the Romanian MUN.

Devon Arnold, Kathleen Artman, Andrew Mays and Mary Evelyn Todd were voted by their peers in Salamanca as "most likely to become a diplomat in the future" because of their outstanding performance at the simulation.

Samantha McFarland, Gabriella Cappo and Thomas Espy (along with the others) were asked by their Chairs--because of the Samford students' knowledge and preparation--to facilitate the debates in their respective committees.

Simoni said the organizers of the MUN in Salamanca declared the Samford team to be "the most well-prepared by far."

Samford's team also presented in the closing ceremony of the MUN, held in the room were Christopher Columbus pleaded with Queen Isabella of Spain to fund his famous expedition.

Simoni described the team's work as "another stellar performance," and noted that "it is through programs like MUN that future generations learn how to debate constructively with fellow peers from all over the world and, eventually, make this world a little better."
Samford is a leading Christian university offering undergraduate programs grounded in the liberal arts with an array of nationally recognized graduate and professional schools. Founded in 1841, Samford is the 87th-oldest institution of higher learning in the United States. The Wall Street Journal ranks Samford 1st nationally for student engagement and U.S. News & World Report ranks Samford 66th in the nation for best undergraduate teaching and 104th nationally for best value. Samford enrolls 5,683 students from 47 states and 19 countries in its 10 academic schools: arts, arts and sciences, business, divinity, education, health professions, law, nursing, pharmacy and public health. Samford fields 17 athletic teams that compete in the tradition-rich Southern Conference, and ranks 6th nationally for its Graduation Success Rate among all NCAA Division I schools.