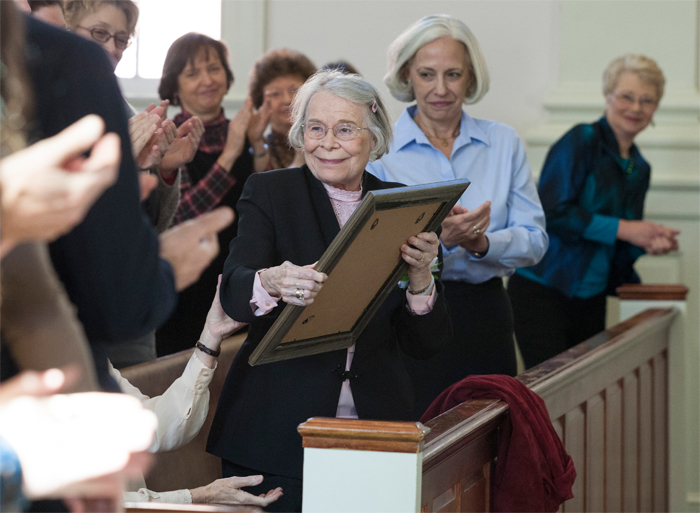 The Chapman Hall facility, due for completion this summer, honors Grace Weeks Márquez ‘42, nationally-respected Spanish educator, department chair, 1989 Samford Alumna of the Year and founder of Samford’s first language lab in the 1960s.

When complete, the new facility will bear a portrait of Márquez along with a plaque detailing her distinguished career, which in addition to Samford includes Birmingham-Southern College and schools in Mexico, Birmingham’s Baptist Church of the Covenant and a number of other institutions. The plaque tells a story of a profound and ongoing influence on several generations of language students.

Márquez, a Clanton, Ala., native who first taught at Samford from 1955-1970 and returned in the late1980s, was present at the event to see the fruits of her long career. “My greatest joy as a teacher is when I look around and know that there are still many, many students who are learning the language that we who believe in Spanish think is spoken in heaven,” she said.

Friends, colleagues, alumni, family and numerous “hijas de la lengua”—students of Márquez or students of her students--attended the opening celebration in Reid Chapel and paid tribute to her personal and professional impact.

Allgood recalled her freshman year on Howard College’s muddy new campus in 1957. “Little did I know on that fateful day, when I walked in to my Spanish 201 class for the first time, that my life was about to change forever, because that was the day I fell under the spell of Grace Weeks Márquez,” Allgood said. “Of the many things she taught us, perhaps the most important was an enduring appreciation for the beauty of the Spanish language and its diverse cultures.” Allgood and the other speakers noted how Márquez expected as much of herself as she expected of her students. “She inspired us to excel,” Allgood said.

That inspiration extended beyond Spanish fluency. Coleman recalled her student days, when a local man offered her cash to help him cheat in a language correspondence course. When Coleman told her mother about this tempting offer, her mother simply said, “what would Dr. Weeks think?.” That was sufficient correction for a student who considered it “impossible” to fall short of her professor’s ethical standards.

Glenda Jones remarked about how crossing paths with Márquez could take students far beyond their expectations, both linguistically and geographically. Many found themselves with Grace and husband Francisco in Mexico, teaching English, refining their Spanish and immersing themselves in Latin American culture. Recalling her own experience, Jones said that she often tells her students that they’ll need to know a particular part of Spanish when they wake up in Mexico City or Madrid someday. “They say ‘I’m never going there,’” Jones said, “and I smile.”
Samford is a leading Christian university offering undergraduate programs grounded in the liberal arts with an array of nationally recognized graduate and professional schools. Founded in 1841, Samford is the 87th-oldest institution of higher learning in the United States. The Wall Street Journal ranks Samford 1st nationally for student engagement and U.S. News & World Report ranks Samford 66th in the nation for best undergraduate teaching and 104th nationally for best value. Samford enrolls 5,683 students from 47 states and 19 countries in its 10 academic schools: arts, arts and sciences, business, divinity, education, health professions, law, nursing, pharmacy and public health. Samford fields 17 athletic teams that compete in the tradition-rich Southern Conference, and ranks 6th nationally for its Graduation Success Rate among all NCAA Division I schools.