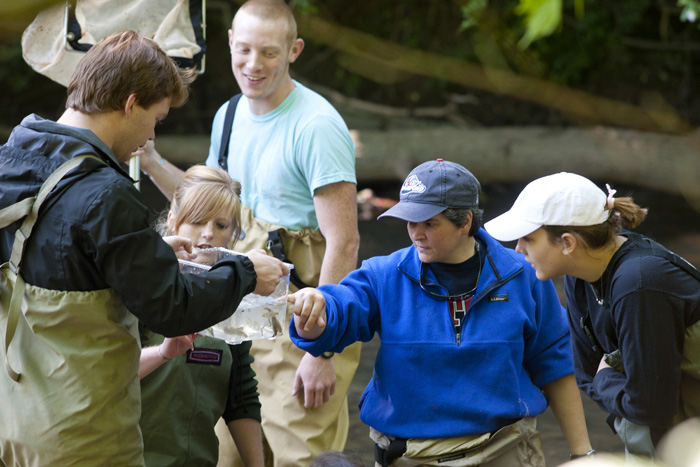 The Friends of Shades Creek have honored Samford biology professor Kristin Bakkegard with their 2014 Volunteer Educator of the Year Award.

Bakkegard is a dedicated community education volunteer, reaching out to schools, scouting organizations and churches to increase understanding of science and appreciation of Alabama's biodiversity. Children throughout Jefferson County recognize Bakkegard and the salamanders she allows them to view and touch.

Bakkegard and her Samford students have done essential research on the last known population of spotted salamanders in Shades Valley. The creatures live in the Homewood Forest Preserve, which the City of Homewood and Samford University jointly placed under conservation easement in 2008.

The Huntsville, Ala., native joined Samford's faculty the same year, after earning her Ph.D. and concluding an active-duty career as a surface warfare officer in the U.S. Navy. She holds the rank of captain and remains a Navy Selected Reservist.
Samford is a leading Christian university offering undergraduate programs grounded in the liberal arts with an array of nationally recognized graduate and professional schools. Founded in 1841, Samford is the 87th-oldest institution of higher learning in the United States. The Wall Street Journal ranks Samford 1st nationally for student engagement and U.S. News & World Report ranks Samford 66th in the nation for best undergraduate teaching and 104th nationally for best value. Samford enrolls 5,683 students from 47 states and 19 countries in its 10 academic schools: arts, arts and sciences, business, divinity, education, health professions, law, nursing, pharmacy and public health. Samford fields 17 athletic teams that compete in the tradition-rich Southern Conference, and ranks 6th nationally for its Graduation Success Rate among all NCAA Division I schools.