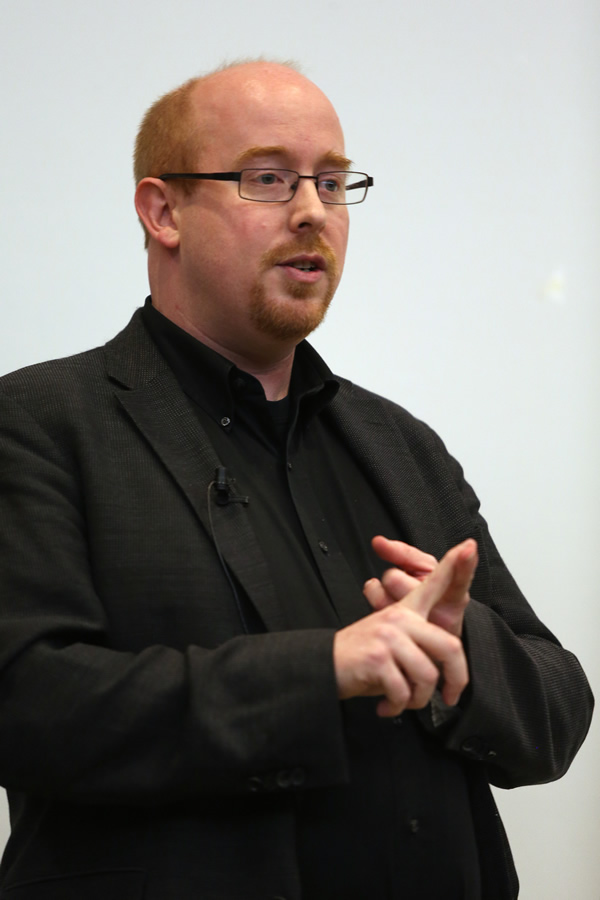 Birmingham politics and government journalist Kyle Whitmire took a hard look at his own profession for the 2014 Timothy Sumner Robinson Forum at Samford University April 15. The forum, hosted by Samford’s Journalism and Mass Communication (JMC) Department, is named for a 1965 Samford journalism alumnus who went on to a distinguished career at The Washington Post and the National Law Journal.

As a reporter for the Birmingham Weekly alternative newspaper, Whitmire once helped break a public corruption story he said The Birmingham News avoided for months. He noted the irony of his joining The Birmingham News/Al.com in 2012, after a decade of reporting in the city and in the midst of a “great upheaval” at the company. His friends could scarcely believe that he would board what many considered a sinking ship, but Whitmire saw a radically different company emerging with less print, fewer gatekeepers and a smaller and younger staff “not afraid of being digital-first.”

“The system we have today is essentially a really big blog,” Whitmire said of the reborn Birmingham News/Al.com. Reporters bear increased responsibility to decide what to report, how to report and how to attract readers. “For a lot of people this is a dream, but it’s also just enough rope to hang yourself,” he said. Copy editing often relies on an informal “buddy system.” Readership metrics and content quotas rule, typically rewarding short and shallow stories with click-bait headlines that tease readers by concealing information rather than revealing it.

The writing is literally on the wall at Al.com to remind staff which stories are leading in page views. Whitmire observed that if his employer wanted maximum profit, analytics suggest that it should simply fire everyone except sports reporters covering Auburn University and the University of Alabama because that’s the content readers most want.

“The ultimate problem with the business model that we’re following, Whitmire said “is that there is a direct feedback loop from traffic to advertising to revenue to expenses.” The glut of cheap internet advertising demands maximum page views to make the expense worthwhile. “Until media figure out the advertising problem, the effect is going to be a journalism problem,” he said.

The day of 24-7 sports has not yet arrived at his company, but Whitmire cited two stories from last year as representative of the challenge of current journalism. When a sign at Birmingham’s Shuttlesworth International Airport fell and killed a child, The Birmingham News/Al.com expended enormous resources to research, investigate and report the story, even going so far as to sue the Birmingham Airport Authority to secure public documents related to the tragedy.

The final story was timed to publish in print and online simultaneously for maximum effect. Some who read it saw reason to hope that real journalism was not dead, but when Whitmire checked the story’s analytics he saw that its page views were significantly eclipsed by those for an item about UA football coach Nick Saban showing up in a student’s graduation photo.

“This is the sort of thing that we’re confronted with every day,” Whitmire said. The choice, he said, is to “die the noble death” by reporting important stories that people don’t want to read, or to thrive by reporting trivia.

The burden isn’t entirely on journalists, of course. Whitmire joked that if his talk had a title it would be “Frankly My Dear, You Don’t Give a Damn.” He said citizens should invest the time to be good readers instead of professing a desire for important stories but actually reading fluff or abandoning stories after reading only two or three paragraphs (which is one of the sad truths those analytics reveal). He also warned against the trend of readers looking only to partisan sources for news.

Whitmire did offer more hopeful notes. The decline of media gatekeepers and the rise of “citizen journalists” can actually benefit the public by making it impossible for more traditional media to ignore stories, he said. The loss of gatekeepers also will allow aspiring reporters to rise on the strength of their talents rather than their formal education and professional credentials. And, in spite of the emphasis on getting something, anything, online before competitors, getting the news right remains the foundation of good journalism. “No one remembers when you’re first,” Whitmire said. “Everyone remembers when you’re wrong.”
Samford is a leading Christian university offering undergraduate programs grounded in the liberal arts with an array of nationally recognized graduate and professional schools. Founded in 1841, Samford is the 87th-oldest institution of higher learning in the United States. The Wall Street Journal ranks Samford 1st nationally for student engagement and U.S. News & World Report ranks Samford 66th in the nation for best undergraduate teaching and 104th nationally for best value. Samford enrolls 5,683 students from 47 states and 19 countries in its 10 academic schools: arts, arts and sciences, business, divinity, education, health professions, law, nursing, pharmacy and public health. Samford fields 17 athletic teams that compete in the tradition-rich Southern Conference, and ranks 6th nationally for its Graduation Success Rate among all NCAA Division I schools.