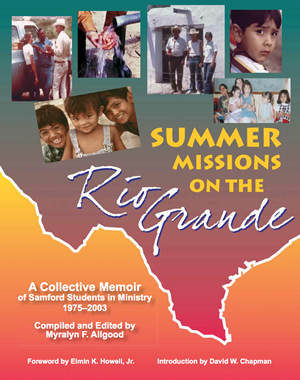 Summer Missions on the Rio Grande: A Collective Memoir of Samford Students in Ministry, 1975-2003 was a labor of love for Allgood, who first visited Texas 40 years ago this winter to learn how Samford students might participate in the program.

The years of mission service that followed inspired participants long after they left the river. “From time to time, from  here and there—a student’s journal entry, a casual word between friends, encounters with River Ministry alumni over the years—there has been an ongoing echo of the same theme: ‘Señora, when are we going to write a book about all this?,’” Allgood wrote in her preface to the book.

That question led Allgood to a three-year exploration of the materials and memories that became the book. It was an enormous task, but Allgood kept faith in its importance. “I think we all sensed from the outset that God’s hand was on this project, and watching Him move in the lives of those involved was a remarkable thing to behold—and to recount,” she wrote.

Howard College of Arts and Sciences helped fund the book’s production. To celebrate the publication, the college will host two free public receptions April 9 (3 p.m. or 7 p.m.) in Samford’s SIM Forum, inside the east entrance of Brooks Hall. Books will be available for purchase ($10 for RM alumni, $20 for others) and Allgood’s autograph at the receptions.

Autographed copies of “Summer Missions on the Rio Grande” are available in Samford’s bookstore. The book may be purchased online without the RM alumni discount, but is available by mail with the discount (plus $7 shipping) by calling 205-726-2834.


Samford is a leading Christian university offering undergraduate programs grounded in the liberal arts with an array of nationally recognized graduate and professional schools. Founded in 1841, Samford is the 87th-oldest institution of higher learning in the United States. The Wall Street Journal ranks Samford 1st nationally for student engagement and U.S. News & World Report ranks Samford 37th in the nation for best undergraduate teaching and 97th nationally for best value. Samford enrolls 5,758 students from 48 states and 22 countries in its 10 academic schools: arts, arts and sciences, business, divinity, education, health professions, law, nursing, pharmacy and public health. Samford fields 17 athletic teams that compete in the tradition-rich Southern Conference, and ranks 3rd nationally for its Graduation Success Rate among all NCAA Division I schools.