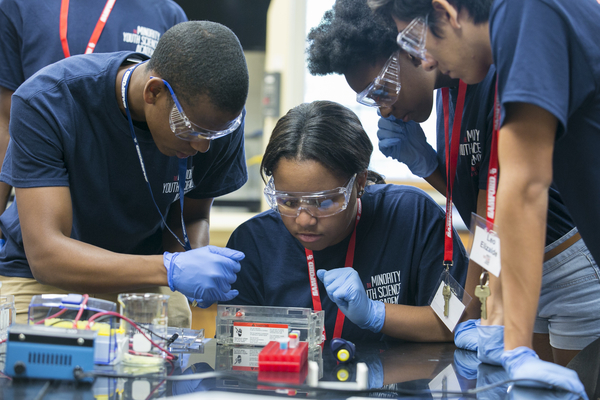 Denise Gregory–Samford chemistry professor and Director of Diversity and Intercultural Initiatives–said the inaugural camp was an overwhelming success. “All it took to help these young minds pick a path was exposure to the possibilities, and they ran with it, ” Gregory said.

A panel of minority STEM professionals made an especially big impression. “Both the students and the parents echoed the importance of seeing minorities in these professional STEM careers and the benefit of seeing someone that looks like them in these roles,” Gregory said.

The panel certainly resonated with Jill Harris of Alabaster, Alabama, partly because it introduced her to study and career options she had never considered. “It’s helped me figure out which science career I want,” she said. For now, at least, she is interested in computer programming because “it’s ever-changing.” “I like that you’re not going to do the same thing all the time,” she said.

Felicia Arteaga of Birmingham said her interest in medicine arises from a serious illness in her family. She feels called to help, and is especially interested in becoming a neurosurgeon. Arteaga will take three AP courses next year to prepare for college, and has a new possibility to consider. “I was sitting on my bed in the dorm last night thinking, ‘what if I consider Samford?’,” she said.

Jabbari Smith, of Prattville, Alabama, said MYSA helped him focus an interest that began with childhood visits to doctors. “I used to bombard them with questions,” he said. “I’m in love with science, so this camp is putting it on the nose for me”.

“My dream is to be a biomedical engineer,” Smith said. “That’s what I want my legacy to be—to know that I helped people.”