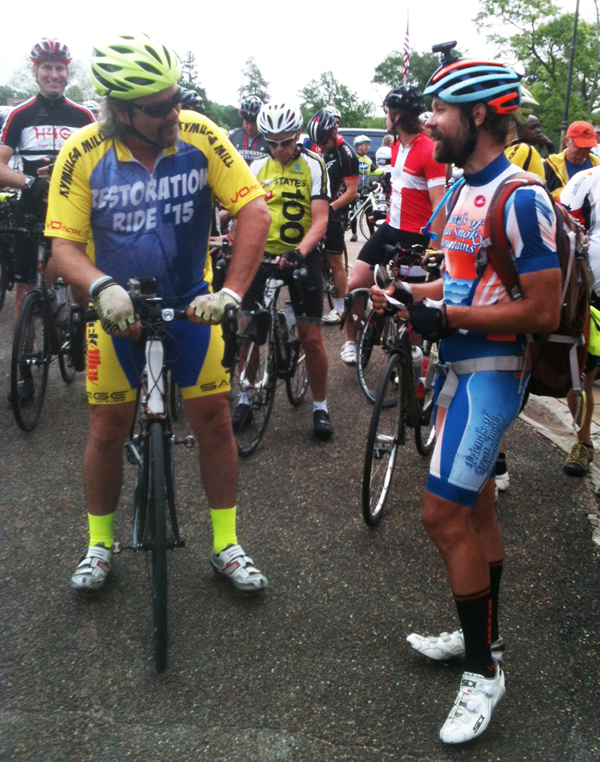 Samford’s annual Old Howard 100 bike ride brought 332 riders to Alabama’s Black Belt April 17. The event was down fewer than 100 riders from 2014’s record-setting participation of 420 in spite of this year’s much gloomier weather forecast. The predicted storms waited and the riders enjoyed a day of comfortable cycling through natural beauty and historic sites.

This year’s anniversary of the Selma-To-Montgomery march may have helped sustain participation in Samford’s ride. Organizers arranged for all participants to have the option of riding only the 57-mile Selma loop, a route usually reserved for riders of the full century. The Main Street Selma organization hosted a rest stop in view of Selma’s historic Edmund Pettus Bridge.


The ride held special significance for rider Bob McGuire. His father, a Howard College alumnus of 1950, died last year. “This was a great way to honor his memory on the 65th anniversary of his graduation from Howard, on a ride named after his school,” McGuire said. The Selma experience made the ride that much more meaningful, he said. “To be able to ride over the same bridge that Martin Luther King walked on this ride was a tremendous honor.”

Samford University professor and champion cyclist Brian Toone (shown at right, above) rode in the Old Howard 100 only a year after suffering a serious cycling accident. Toone, who has recovered in style, took first place in the Heart of the South race of 517 miles in early April and is currently training to ride the punishing 3,000 miles of the Ride Across America in June. He compounded the challenge of the Old Howard century by riding to the ride from his Birmingham home, for a round-trip total of 302 miles.

Few, if any, riders are up to Toone’s challenge, so the Old Howard 100’s organizers offer routes and distances for all levels of cycling experience and determination.

Since 2013 the Old Howard 100 has been part of the Alabama Backroads Cycling Century Series, 10 rides that seek to promote the growth and development of long-distance cycling in Alabama, encourage participation in established Alabama century rides, recognize and reward individuals for their accomplishments, and benefit the charities and advocacy efforts supported by each of the events.

Proceeds from the Old Howard 100 benefit healthcare initiatives of the Sowing Seeds of Hope organization in Perry County, Ala. The ride has raised almost $37,000 to date.