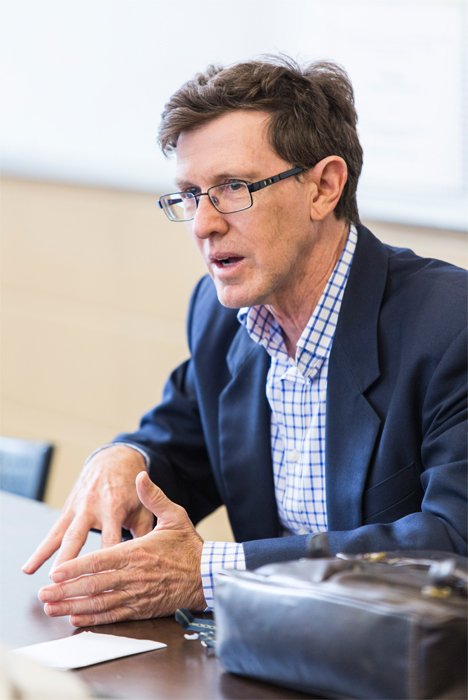 Samford University's Center for Science and Religion welcomed historian Peter Harrison for a minister's workshop and public lecture on "The Religious Origins of Science" March 30. Harrison, former Andreas Idreos Professor of Science and Religion at the University of Oxford, currently is an Australian Laureate Fellow and director of the Centre for the History of European Discourses at the University of Queensland.

Not only were many prominent scholars in the early history of western science Christian, Harrison said, their faith actually motivated their scientific passions.

Harrison observed that the Catholic church that in 1633 condemned Galileo for heresy had been the most prominent supporter of astronomical science since the late middle ages. It had not suppressed the heliocentric theory of Copernicus. Galileo attracted the Church's attention for teaching that model as fact and seeming to interpret the Bible in support of his theory at a time of great social turmoil over theological issues such as interpretation of scripture.

The trial of Galileo, often portrayed as a schism between science and religion, was neither a true conflict nor typical of the church's relationship with science, Harrison said. In fact, he said, it was in part a defense of consensus science. Galileo, formerly a member of the Catholic clergy, remained a Christian until his death, still under house arrest.

Only a few decades after Galileo's trial, puritan Christians held the majority of memberships in England's Royal Society even though puritans were a minority in English culture. Harrison argued that the puritans did not embrace science in spite of their faith, but because of it. He said their passionate and literal reading of Genesis led them to believe that understanding creation offered a way to understand of the will of God and reclaim some of the responsibility and power over the natural world trusted to Adam before his corruption. Science was, therefore, a "redemptive" exercise, Harrison said.

Harrison said this Christian belief in what man could be at his God-willed best helped move science to the center of western culture. Further, he said, the related conviction that man is imperfect and corruptible underlies the scientific method's focus on careful and repeated observation, and its rejection of "naive investigation."

The tie that bound science and religion was sometimes strained, of course. Harrison said that although Darwin's theory of natural selection enjoyed support among many prominent Christians, some scientists seized on the work as a way to challenge the power of the church.

That "unintended consequence" of Darwin's research continues to feed the popular perception that science and religion are incompatible, but a recent study by Rice University sociologist Elaine Howard Ecklund revealed that 70 percent of evangelical American Christians have no difficulty reconciling science and faith. At Samford, Harrison made clear that this isn't a modern accommodation or a surrender to secularism. Instead, it seems to be an echo of the unique religious culture that created, consolidated and sustained modern science in the west
Samford is a leading Christian university offering undergraduate programs grounded in the liberal arts with an array of nationally recognized graduate and professional schools. Founded in 1841, Samford is the 87th-oldest institution of higher learning in the United States. The Wall Street Journal ranks Samford 1st nationally for student engagement and U.S. News & World Report ranks Samford 37th in the nation for best undergraduate teaching and 97th nationally for best value. Samford enrolls 5,758 students from 48 states and 22 countries in its 10 academic schools: arts, arts and sciences, business, divinity, education, health professions, law, nursing, pharmacy and public health. Samford fields 17 athletic teams that compete in the tradition-rich Southern Conference, and ranks 3rd nationally for its Graduation Success Rate among all NCAA Division I schools.