The Prisoner’s Friend Statue Finds a New Home at Samford 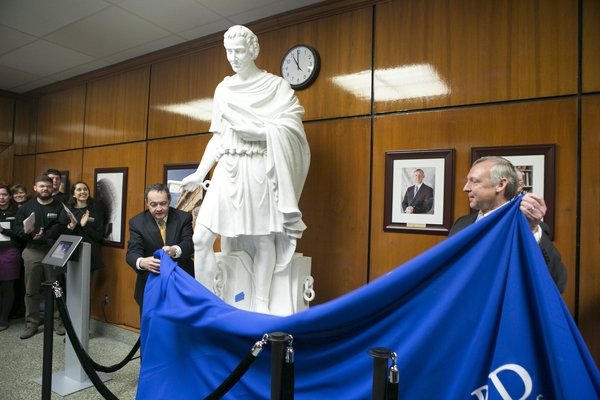 Chapman said the event was the first of many celebrations of Samford’s 175th anniversary this year, and “the culmination of years of effort” to memorialize the man who is revered as a model of Christian compassion.

Speaking as part of the program, John Howard Scholar Marisa Nunez said she identified with Howard as a 22 year old setting off alone to learn what he could do “to reduce the sum of human misery,” as the original statue’s inscription puts it. She noted that his privileged position in society allowed him to venture abroad, where capture and imprisonment by privateers sounded the first note of his calling to speak for the voiceless prisoner.

As High Sheriff of Bedfordshire in the 1770s, Howard found great injustice in the penal system, including generally poor treatment and prisoners who had been acquitted of all charges but couldn’t afford to pay their jailer to release them. Howard began a reform campaign that led to Parliament, the broader United Kingdom and Europe. His influential 1777 book The State of the Prisons secured his reputation as a reformer.

Howard continued his mission until he died during a visit to prisons in Ukraine in 1790. Half a century later, Samford’s founders honored him in the naming of the new college. Howard College became Samford University in the 1960s, but Howard College of Arts and Sciences remains the university’s academic core.

Chapman said becoming dean of the college in 2001 sparked his interest in Howard’s life and connection to Samford. After years of thought about how to make students and alumni more aware of that legacy, he set the goal of commissioning a replica of St. Paul’s Cathedral’s 1795 memorial to Howard by sculptor John Bacon, the finest of many depictions of Howard. That white marble sculpture reflects the classical influences of the Enlightenment, depicting Howard in ancient attire, and with a book, key, and opened shackles to represent his life’s work. Starting in 2014, Chapman proposed a “Bring Him To Birmingham” fundraising campaign and led a staff team to complete the ambitious project.

Sean Flynt, Executive Director of External Relations for the college, contacted Simon Carter, Collections Manager for St. Paul’s Cathedral, researched the various options for creating the statue and recommended Edinburgh-based photographer Antonia Reeve and the Ancient Sculpture Gallery company for the work. “In addition to the cathedral being an active worship space, this is one of its most historically important sculptures,” Flynt said. “The project was unprecedented for the cathedral, so we were very aware that every choice we made would set a standard.”

In July, 2014, Chapman met with Carter, who approved the project along with the Reverend Phillippa Boardman, Canon of the cathedral.

Stacy Gay, Samford’s Director Donor Engagement & Stewardship, helped find donors who are passionate about Howard's legacy, and worked with two leading donors on the inscription on the Samford statue’s plinth.

The front of the plinth acknowledges the original statue. Another side is inscribed, “In loving memory of Ella Lucinda Dunning Evans, Dr. Herbert A. McCullough and Dr. Ronald Jenkins. The opposite side is inscribed “As ye have done it unto the least of one of these…” as a gift of the Crider Family—Robert ’61, Barbara ’62 and their children Todd ’87, Stephanie ’89 and Timothy ’98.

Victoria Knierim, Core Curriculum instructor and Coordinator of Academic Enrichment for the college, coordinated the John Howard Scholars’ role in the project, helped raise funds and organized the dedication program.

Glenda Martin, Administrative Assistant to the Dean of the college, managed the many contracts the project required and coordinated installation of the statue in the foyer of Brooks Hall, where it will serve as a constant reminder of Samford’s unique mission.