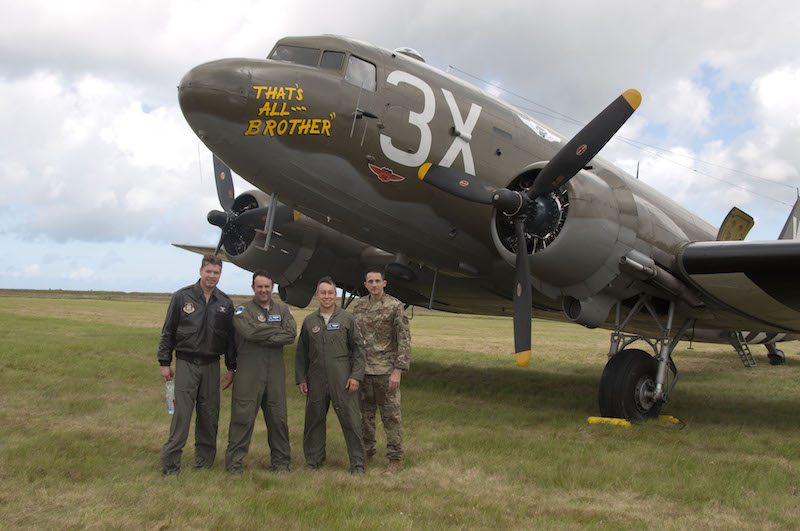 Matt Scales, right, and his crew pose in front of the historic C-47 aircraft.

When Allied nations celebrated the 75th anniversary of D-Day June 6, a C-47 aircraft that led the actual invasion flew high over Normandy beaches once again. The plane nicknamed “That’s All, Brother” had been the lead aircraft carrying U.S. paratroopers to start the World War II Normandy invasion in 1944.

Thousands of C-47s were built in the 1940s, but very few are flying today. “That’s All, Brother” continues in the air largely due to the efforts of 2007 Samford history graduate Matt Scales, a member of the U. S. Air Force Reserve who conducted a years-long search to track down the historic plane. The craft had been sold to a succession of private owners after the war.

“I never set out to look for an airplane,” Scales said. Instead, as an Air Force historian, he was researching the life of the pilot who flew the plane in the D-Day invasion, John Donalson. “It was while researching his life that I found the airplane’s Army Air Force tail number which, after some research, led me to the aircraft in Arizona. It was almost 10 years later that it was rescued and restored (by the Commemorative Air Force of San Marcos, Texas).

“That tail number was the key to locating the aircraft,” Scales said. He and a fellow Air Force historian, Ken Tilley, found the number in a June 1944 history of the unit that flew the plane. “We later found film footage of General Dwight Eisenhower visiting the crew and paratroopers in front of the plane and it taxiing out and taking off.”

Scales said knowing how to document his research and sources from his Samford days played a key role in establishing the plane’s identity and role in D-Day. “People challenged my research but I was able to stand my ground because I had documented my research thoroughly,” he said. “I give all the credit to my history professors at Samford for that.”

One of his former professors, Ginger Frost, called Scales’ project “a feat of historical detection that would make any history professor proud of her student.”

Scales was able to go to the D-Day 75th anniversary celebration because his Air Force Reserve unit was one of three selected to attend the event. As a result, he saw “That’s All, Brother” flying over Normandy beaches several times. At one point, it flew near Pointe du Hoc, the famous cliff scaled by U.S. Rangers as part of the D-Day invasion. Scales said that was a “particularly poignant moment” for him.

“The plane was flying off the left wing of our C-130. I would never have imagined it would be restored back to its World War II condition and colors, that it would fly back to Europe or that I would be there to see it. To see the plane that I had spent over ten years researching and being part of the effort to save pull up on our left wing over such a hallowed place as Pointe du Hoc was the ultimate exclamation point for the whole crazy journey.”

Scales said the ten days in Normandy were one of the highlights of his career. “The citizens of the Normandy region have not forgotten the sacrifice the Americans and our allies made for France.” He said about 170 U.S. veterans of the war were able to attend and “they were like celebrities walking around the small villages.”

Scales said the C -47 story has opened a number of possibilities the best part of which has been locating the family members of the crew who flew the plane and the paratroopers who jumped from it. He flew with some of them in “That’s All, Brother” at last year’s famous Oshkosh (Wisconsin) Airshow.