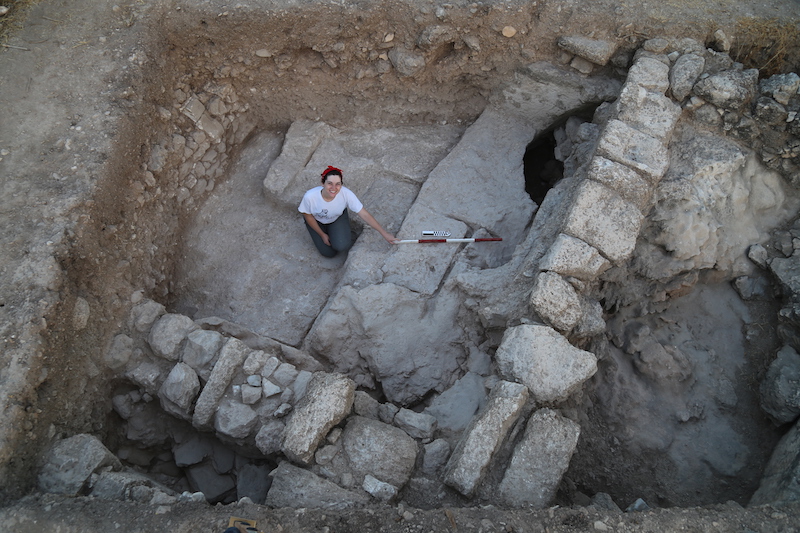 For 10 days, senior Jewel Trail rose at 4 a.m. every morning to prepare for a long day of excavation to learn more about early life in Israel. Trail was one of four students traveling this summer to the northern region of the Israel on the Samford Abroad Biblical Archaeology trip led by James Strange, Charles Jackson Granade and Elizabeth Donald Granade, professor in New Testament

The students arrived at the dig site each morning as dawn approached.

“The sky is just starting to lighten when we arrive, open the tool container, and raise our shade cloths to prepare for the workday,” Strange said.

Since 2012, Samford professors and students have been on site at the project which is a collaboration between Samford and the Kinneret Institute for Galilean Archaeology overseen by Strange and Mordechai Aviam of Kinneret College. The project is a multi-disciplinary, multi-institutional, international, cultural heritage project whose goal is the recovery and preservation of the site of Shikhin in Lower Galilee of Israel. Attendees of the archeological field school get training in standard excavation and recording skills regardless of their prior experience.

“We have learned that those who begin with us and end up on other digs become simply invaluable to those projects,” Strange said. “By the end of the dig, students are able to make inferences about human activities and values based on material culture. They are also able to form very good hypotheses about an unexcavated site and establish protocols for how to test them archaeologically.”

Senior chemistry and classics major Jewel Trail aspires to a career in archaeology specializing in the Ancient Near East. Her experience on the trip brought the connection between her research interests and archaeology to life at the Roman Galilean site.

“I want to do more than just the chemical side of archaeology,” she said. “Going on the dig was a way to help me explore where my two majors connect and the different things I can do with archaeology. It also ended up being a great networking opportunity as well.”

Trail worked with chemistry and biochemistry professor Brian Gregory last summer analyzing samples of pottery found during Shikhin excavations. She brought a new perspective to that continued work this summer as a participant in the dig.

“It’s made me appreciate how much you really can tell from one piece of pottery just from looking at it,” she said. “And I discovered what more I could tell from it when we dissolve it in the lab and are able to look at it in a different way.”

Trail said she also appreciated how participating in the dig brought a new perspective on her studies in Greco-Roman ancient history.

“There’s not as much documentation in Israel yet as there is in classical archaeology,” she said. “They’re still piecing together a lot of things and it’s so cool to learn information that is still being developed and getting to be a part of that discovery process.”

Alongside fellow senior classics major Abi Rodgers, another member of the excavation project, Trail will continue analysis of their finds in the lab with Dr. Gregory this summer. By determining the chemical makeup of various samples, they hope to discover the scope of Shikhin lamp production and distribution in its geographical region.

As in past summers, the team discovered new aspects of the life and industry of the ancient village of Shikhin. Previously, they found broken fragments of oil lamp molds but weren’t sure if the site had manufactured the lamps themselves, just lamp molds, or both. The team had never found a complete lamp mold among the damaged fragments they often found.

“In 2019, for the first time we found a nearly complete mold for making the top part of a type of lamp that was made at Shikhin and distributed throughout Galilee,” Strange said. “That was a lovely surprise.” Strange said the lamp found this year featured decorations of grapevines and clusters of grapes, and an amphora. They were able to connect these designs with ones used in synagogues and on coins minted during the First Jewish Revolt of 66-70 AD.

A complex of plastered pools, also evidence of lamp production, was another find this year. Strange hypothesizes the pools were used for a purification process for clay used to manufacture lamps.

“If we are right about that, it will add to the knowledge of the industry in Galilee,” he said.

Another surprise for the team was an excavated wall that belonged to the Roman-period synagogue at Shikhin. The wall consisted of seven courses, when they expected it to only feature one. The wall itself rested on a fine plaster floor rather than the usual bedrock, which evidenced an earlier building underneath the structure. Strange said this find expands their understanding of the site’s infrastructure and promises more to be discovered in the future.

“We will have to continue to dig in this area in subsequent seasons to work out the puzzle of construction sequence we have begun to uncover here,” he said.

Trail said she was astounded by all they were able to find. These discoveries made her realize that preservation must follow their work of excavation.  “Now that things are dug out and revealed, and we’ve recorded things the best we can, you can’t put anything back,” she said. The trip made her even more eager to dedicate her future career to this process of discovery and preservation.

Strange invites students, staff, alumni, and friends of Samford who are interested in the trip to contact him and to visit the Biblical Archaeology in Israel website.