Samford Computer Science Students Hack Their Way to the Top

Published on September 18, 2019 by Gabriela Hoefer and Anisha Nizar Ali, with Sean Flynt   Share this on: 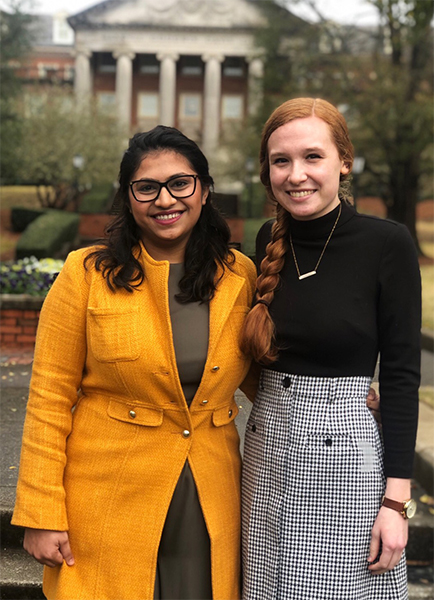 Professor Greg Kawell mentored the computer science students and encouraged them to enter hackathons–contests in which undergraduate and graduate students typically spend 24 hours coding a novel product to present to a panel of judges. Hoefer and Nizar Ali had very little coding experience when they began that journey, but enjoyed surprising early success with teammates Lyra Lupuyade and Justin Young. For the 2018 Crimson Hacks event, the team developed Compassion Companion, a platform to connect volunteers and nonprofit organizations. The technology enables students to find places to volunteer and organizations to promote their work. In 24 hours, the team came up with the concept, created a logo, programmed backend databases, designed the frontend and presented the project to judges. For their efforts, the team took home the Pariveda award for Best Project for Social Good, Best Rookie Hack award and Second Place in the overall competition.

Hoefer and Nizar Ali continued to develop that project on their own through the summer and fall 2018, changing its name to Volonte, redesigning the front end of the app, developing new back-end databases to fit specific user needs and conducting product research on the target market and competitors. They presented their work at the Association for Computing Machinery (ACM) Mid-Southeast Conference and earned third place among undergraduate research presentations.

Hoefer and Nizar Ali joined teammates Lyra Lupuyade and Aliah Ojendyk for the 2019 Auburn Hacks event, at which they developed Mazevo, a product to house victims of natural disasters. Their iOS app was designed specifically for individuals with disabilities and the elderly. The team also programmed hardware to send users’ locations to the app during emergency situations, and they paired an Amazon Alexa skill with the application in case the user was unable to reach a device. The team, with no prior experience coding that specific technology, mastered the work so well in only 24 hours that they earned Second Place overall in the competition’s experienced programmer division. Hoefer also earned a social media award for her photography of the event.

The Samford team was the only all-female team in competition at the Auburn Hacks event—not surprising for a male-dominated discipline. Hoefer and Nizar Ali were proud to help represent women in computer science there and in other competitions, and proud to find that their Samford education and mentoring had prepared them so well for careers in the field.

Hoefer graduated in May and currently is earning a master’s degree in computer science at Brown University, where she applies her Samford computer science and psychology education as the manager of the university’s Human-Computer Interaction lab and works on a system that helps psychiatrists determine mental health risks by analyzing patients' messaging data. She recently earned a Love of Learning grant from Phi Kappa Phi in recognition of her superior academic record and life and career ambitions.

Nizar Ali, now a Samford senior, went on to develop Accidentally, a driver safety product that earned first place in the 2019 Crimson Hacks competition. She also completed an internship with the Conserv corporation and helped secure official recognition for Samford’s ACM chapter, which she now serves as president. She has begun a new internship with the Kinetic corporation and looks forward to more hackathons and a career as a developer.