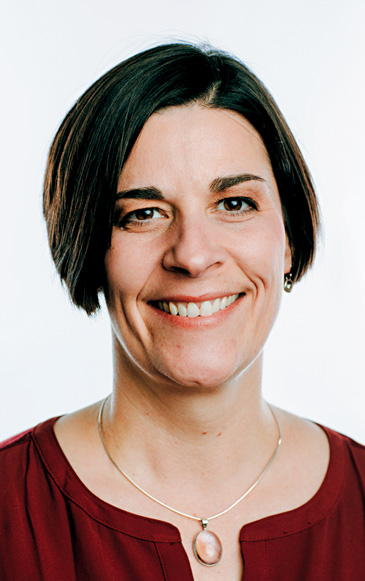 Sharon Galgay Ketcham, professor of theology and Christian ministries at Gordon College in Massachusetts, brought to Samford a timely and powerful message in November. Her three presentations, hosted by Samford’s Department of Biblical and Religious Studies and the Center for Congregational Resources, were part of the Holley-Hull Lecture Series, which address contemporary theological and social issues in honor of former Samford Provost William E. Hull.

Ketcham is best known for her book Reciprocal Church: Becoming a Community Where Faith Flourishes Beyond High School, and she explored that theme in her lectures at Samford. In the last of these, she illuminated the causes of, and possible responses to, an unprecedented exodus of young Christians from the church.

“If I had stood before you a decade ago, I imagine myself as a prophet, trying to warn you of what is to come, but today I act more as a journalist who surveys the research and confirms it by both your and my eyewitness testimony,” Ketcham said. “The religious landscape in the United States has changed, and Christian leaders no longer need to be convinced.”

Ketcham said the young Christians turning away from the church are not returning with their families later in life as was once commonly expected. She also noted the increase in Americans–especially young Americans– who check the box for “none” in surveys of religious preference. It’s not that these people have abandoned belief, Ketcham said, but they appear to be building social capital outside the church, contributing to the institution’s ongoing decline in the U.S. even as it grows in Africa, Asia and Latin America. The headlines are clear, she said, but the answers are not. “In our fear and anxiety, we are very tempted to find a magic key in social science data, as if we could solve a problem by one thing,” Ketcham said, “or maybe want to double-down to try and secure the faith of rising generations, which we actually cannot do.”

The good news, Ketcham said, is that “churches answer these questions all the time as they adapt and change.” She cited several historical moments when Christian leaders had to make difficult decisions in defense of their communities and beliefs. German Christians had to distance their community from Nazi policy and practices. Martin Luther King, Jr. called on U.S. churches to become inclusive in ways that broader culture rejected. “There are times when the wider sociocultural dynamics require sustained theological reflection on what it means to be the church,” Ketcham said. “This time is upon us.”

Her own reflection on the current problem leads Ketcham to the conclusion that the church  is declining, in part, because many Christians view it as a service provider. A culture of commodification and personal choice leads people to view spirituality as a product designed for individual improvement, and to view a church as just another consumer choice, she said. “The gospel narrative is readily reduced to an individual-oriented message, stripped of our shared identity, so our expectations of the church and our perceptions of one another follow where “me” is rightfully the center of god’s story.”

Something has gone wrong, Ketcham said, when people say “I can have Jesus without the church”. Christians have long understood that they share an identity, assembling “by God’s initiative and for God’s purposes,” not merely for self-improvement. Even the individual act of confessing faith in a community builds up others and encourages them to participate in the same way, she said. “Christian community has a vital purpose that stands in stark contrast to the service provider myth—Christ’s self-giving love reconciles us to God and others,” she said. “Reconciliation among God’s people is critical to our witness of God’s love to the world.”

A “theology of mutuality” that offers shared experiences, activities and relationships that involve each person’s agency could be transformative, Ketcham said, but requires the Church to unite diverse gifts and differing wills for the purpose of ministry. “Christian community is not forced uniformity, where we reduce what makes us different in order to make us one,” she said. “Such communities exert unhealthy pressure on people to conform their thinking and follow a prescribed way of living as a Christian. The church can trust that the push-and-pull motion among people is to our advantage, as the spirit’s multiplying effect is what transforms God’s people.”

“So often, we reduce very important topics to false binaries that resist nuance,” Ketcham observed. “This results in digging in our heels and losing our capacity to listen”. But to listen to one another, find strength in diversity and mutuality, and live the church’s witness through reconciliation is one way to rebuild a thriving community of Christians, she said. “Ultimately, this will be the new order we live in for all eternity. What will be should orient us in the here and now, and this will require, first, a serious account of the depth of brokenness between us and, a relentless hope that God has not left us alone.”