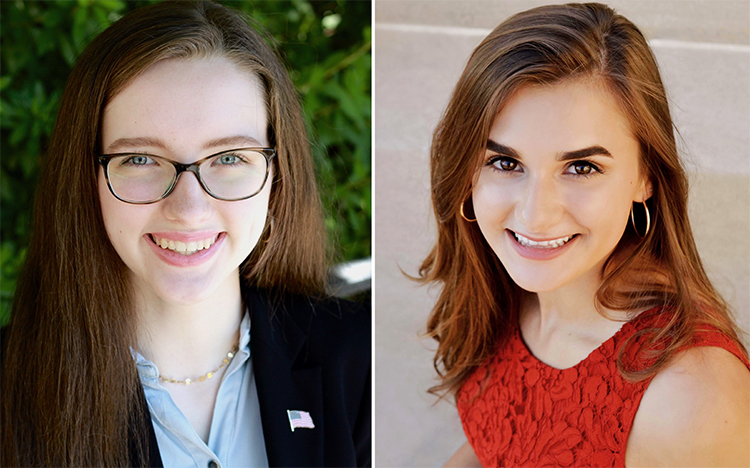 Samford University's Stockham Scholars program has named history and geography major Caroline Bass, and law, politics and society major Savannah Shirley as its first participants. The program, open to humanities majors in Samford’s Howard College of Arts and Sciences, emphasizes the role of the Christian liberal arts in promoting civic virtue and the responsibilities of citizenship. Bass and Shirley both expressed interest in public service careers.

“As Aristotle once wrote, liberty and equality are only achieved when everyone plays a part in their government,” Bass said. “I hope to help others understand their rights and responsibilities as citizens of the United States.” She is already lending a hand in that work through an internship with the Alabama Center for Law and Civic Education, based at Samford’s Cumberland School of Law. "This internship and my work through the Stockham Scholars program will prepare me for a career in law, public service and nonprofit work,” she said.

Shirley expects the Stockham Scholars experience to help her answer a very specific calling. "Since I was fifteen, I have known that I needed to be a voice for the silenced and a helping hand to those in need,” she said. “Professionally, I can see myself pursuing a career as a lawyer, an FBI agent who works with special victims, or an influential member of some organization whose goal is to end human trafficking globally.”

Stockham Scholars director Jason Wallace said each program applicant must submit an essay that identifies the most pressing leadership problem of our day and explains how studying in the liberal arts tradition can help solve it and promote responsible leadership and citizenship. “Both wrote outstanding essays,” Wallace said of the program’s first participants.

Bass and Shirley will receive scholarships of $3,000 per year and remain in the Stockham Scholars program through their senior years, maintaining academic excellence, participating in designated cadres, completing approved internships, and completing a capstone seminar on freedom, civic virtue and leadership.