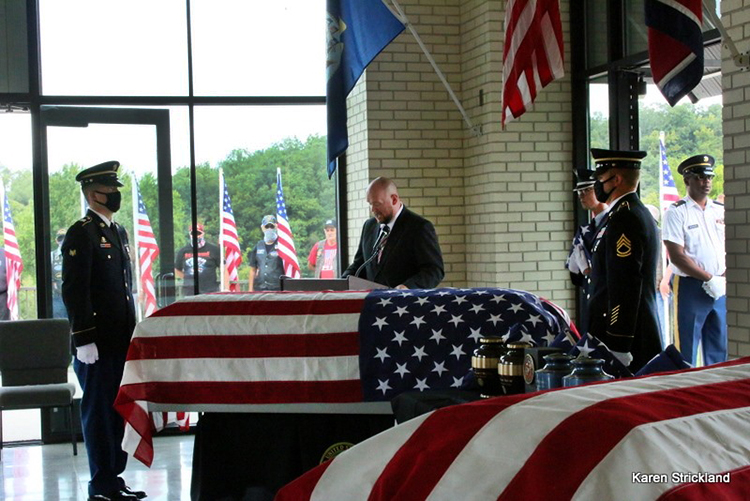 Approximately 40,000 U.S. military veterans are without homes tonight. That estimate, reported by The National Coalition for Homeless Veterans and U.S. Department of Housing and Urban Development, highlights multiple personal and public dilemmas that are not resolved even when those veterans die. With no family to claim them they still have nowhere to go, and would be forgotten if not for dedicated strangers who will speak their names and lay them to rest with their fellow veterans. Samford alumnus Kirby Ownby ’05 is among those providing that final moment of dignity.

After studying religion and Latin at Samford, Ownby earned a Master of Divinity degree at Southern Baptist Theological Seminary, taught Greek and Latin, and in 2017 became pastor of Mount Olive Baptist Church in Knoxville, Tennessee. Funerals are an important part of his ministry, of course, but this summer brought a unique request for Ownby’s service. Jeff Berry, general manager of Knoxville’s Berry Funeral Home, invited him to lead a funeral for unclaimed veterans in early September. “Considering the high amount of homelessness and mental illness among veterans, I felt compelled and humbled just to have the chance to eulogize and to preach for those gathered,” Ownby said.

Berry said the Dignity Memorial Homeless Veterans Program is a national initiative of his parent company, Service Corporation International. In 2013, the funeral home partnered with East Tennessee Regional Forensic Center and East Tennessee Veterans Cemetery to hold services for honorably discharged unclaimed veterans. Since then, Berry said, the program has hosted 80 services, typically in small groups. “We care for our veterans,” he said, and the extraordinary effort to memorialize them demonstrates the depth of the community’s desire to claim them. The flags used in the services, traditionally presented to family members, instead go to partner organizations, JROTC detachments and, most recently, to the pastor who led the service.

The September 1 service honored seven veterans with support from current military personnel and local retired service members. Berry said the Knoxville community usually fills the cemetery on these occasions, but COVID-19 created a new challenge. This time, he said, the funeral home live-streamed the service so even more people could participate. It was a prominent platform for the man chosen to lead the service, but he kept the spotlight on his God and the men to be honored:

These were strangers to all in attendance, but Ownby said we know something about them.

“Each one of these men–men of different backgrounds, different races, different political beliefs and different upbringings–all considered it a worthy cause to serve in our military. They were all American soldiers.”

“These seven men endured hardships, some endured combat, and all believed that the reward of freedom for others was worthy of risking their lives,” Ownby said. And although they didn’t lose their lives during their military service, they were prepared to do so. “When I think about their willing commitment to serve this country and people they would never meet, it always makes me think of John 15:13: Greater love has no one than this, that someone lays down his life for his friends," Ownby said. The pastor explored that theme during his message, emphasizing the rarity of that sacrifice–Jesus’s sacrifice–in a violent world.

“I don’t know of a finer message that could have been presented that day,” Berry said of Ownby’s first service for unclaimed veterans. Berry said it will not be his last if the pastor is willing and able.

“I honestly considered it a very high privilege and would do so again if needed,” Ownby said. “Our country seems to be tearing itself apart, and this was an excellent reminder for me about some of the best parts of our nation.” A single folded flag reminds him, too, of seven veterans who are home at last.