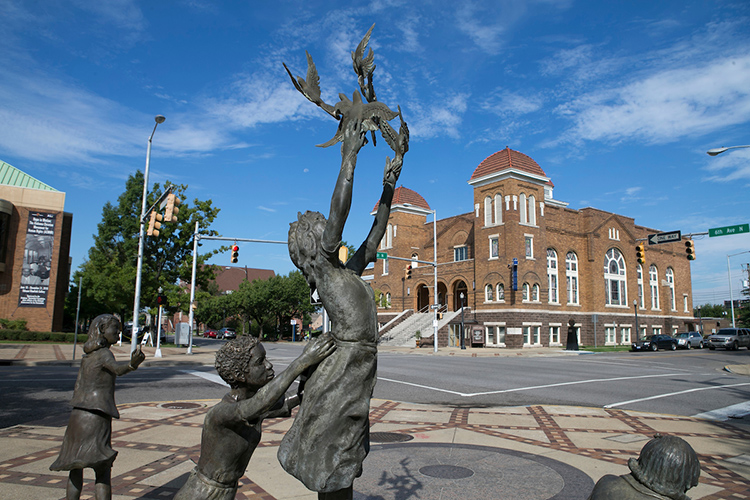 “A goal of the John Howard Scholars program is to explore timely and relevant intellectual concerns, so with the current events of this past summer and this fall, issues of racial (in)justice were a priority,” said program director John David Corwin. McNair supported that work by sharing key events of the civil rights movement, her family’s role in it, and how the social change of the era shaped her personal experience of race.

McNair and younger sister Kimberly learned from others that Denise was smart, kind, giving, and already a community-minded leader at age 11. Lisa McNair doesn’t remember anyone telling her about the bombing that prevented them from ever knowing their older sister personally. “We talk around little children and we don’t think they’re listening, but I imagine that people talked about that around me all the time,” she said. She also accompanied her mother on visits to the cemetery, and when McNair understood enough to ask who was arrested for putting her sister there, her mother answered, “Nobody.”

“A white person could kill a Black person and it just didn’t mean anything,” McNair explained to her audience. The curious daughter couldn’t reconcile that reality with the image of justice she saw portrayed on television. But even in the world she occupied as a child–attending majority-white private schools and a public school in an officially desegregated Alabama–her sister’s killers still had their lives and their freedom.

McNair’s parents, Maxine and Chris, might justifiably have been consumed by hate for the people and system responsible for so much grief and so little justice. Instead, McNair said, “they taught us how to love.” In spite of the horror her family had suffered, hatred of white people or anybody else “was never an option in the McNair household,” she said. “We learned early on that there’s evil in the world, but everybody is not evil, and you have to take each person one at a time to learn who they are.”

The family’s two church communities embodied that belief. Chris McNair attended a Lutheran church that was all-Black except for the white preacher and his family, whom the McNairs considered close friends. “In the sixties, it was a big deal,” McNair said of the families’ frequent visits to each other’s homes. Maxine McNair’s church became an enduring symbol of defiant hope for change in the face of violence.

Chris McNair was among the hopeful, and sought to advance the cause of civil rights within a system poised for change. “My daddy believed that public service was the way to honor Denise, to be a part of the process,” Lisa McNair said. In 1973, that service made him the first African American elected to the state legislature from Jefferson County.

Hope and hard work brought more change, if slowly. In 1977 Alabama Attorney General Bill Baxley prosecuted the first of the four church bombing suspects–Robert Chambliss– for the murder of Denise McNair. Baxley feared that if he charged Chambliss with all four murders at once, the constitutional prohibition of double jeopardy would preclude further charges if Chambliss was acquitted. Not everything had changed, after all, but Chambliss was convicted and sent to prison for the rest of his life.

When filmmaker Spike Lee’s 1997 documentary 4 Little Girls premiered in Birmingham, people asked McNair a new question–“What about the other people who killed your sister?” The question raised by the film prompted the federal government to declassify its files on the bombing, and the newly-available evidence allowed U.S. attorney and Samford alumnus Doug Jones to prosecute and convict the two remaining suspects–Thomas Edwin Blanton, Jr. and Bobby Frank Cherry–in 2001 and 2002.

In 2013, the U.S. Congress posthumously awarded the 1963 bombing victims The Congressional Gold Medal, its highest civilian honor. The McNair family witnessed the unanimous vote and were present for the act’s signing by the nation’s first African American president, but the work of the civil rights movement is not done and its stories are as current as ever.

“I think not enough is said about these brave people who put their lives on the line for just what we’re all supposed to have as American citizens,” McNair said. “This is not a civil rights story or a Black history story. This is an American story, because this is our shared American history.”

McNair relates that history for diverse audiences and, increasingly, serves as a resource for people alarmed by echoes of the hatred that killed her sister. She shares their frustration with a collective failure to learn the lessons of the past, but offers the lessons of her own family’s history as part of the solution. “We have to forgive, not forget–especially those of us who are the body of faith,” she said. “We’re supposed to love each other. We’re supposed to forgive each other, and we need to figure out how to do that.” Even when the news of 2020 recalls the news of 1963, she carries on with that mission. “I have to continue to believe in the humanity of each of us,” she said. “That’s what’s going to get us through.”