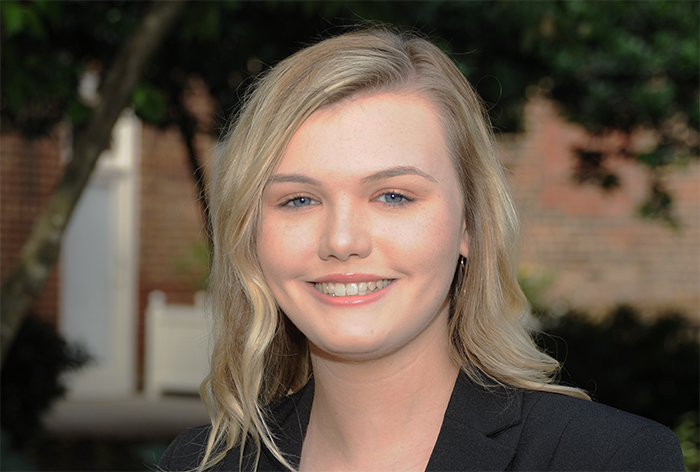 Samford University student Aubrie Strange was supposed to spend March 26 at the 2020 Gulf-South Summit on “Building Healthy Communities.” The junior Journalism and Mass Communication (JMC) major and history minor was to receive the organization’s honor for Outstanding Student Contributions to Service-Learning in Higher Education in recognition for her work as president of Samford’s Partners Acting in the Community Today (PACT,) a community engagement and social justice student organization that works with the university’s Frances Marlin Mann Center for Ethics and Leadership.

“Aubrie's work with PACT is both an example of and inspiration for the great work that students around the country and around the world are doing to make our world a better place,” said Tim Stewart, chair of the Gulf-South Summit Executive Committee. “I'm so glad that Aubrie's efforts are being recognized and encouraged by this award." But instead of collecting that award, Strange was at home in Newport, Tennessee, practicing social distancing during the COVID-19 pandemic that postponed the summit, but still keeping a hand in the work that brought her the honor.

Strange’s Samford colleagues and mentors, including president Andrew Westmoreland, JMC professor Clay Carey and Mann Center Associate Director Allison Nanni, congratulated her via homemade videos and an online meeting. They learned that Strange has been helping provide lunches for local children who, like her, have been displaced from school. Nanni noted that the Mann Center is helping to organize a similar effort for children in Perry County, Alabama, in collaboration with Mann Center AmeriCorps VISTA team members LaQuenna Lewis and Michael Brooks and the Sowing Seeds of Hope organization. Without coordinating, mentors and student arrived at the same conclusion about how best to serve in this emergency.

Strange said her passion for volunteerism in general is as great as what she can bring to any particular project. She simply loves to serve wherever she is needed. “Every time I’m in a community, I’m reminded how important community work is,” she said, “how much it means to so many people, and how much bigger it is, sometimes, than you would ever imagine.”

Serving people harmed by a pandemic is one of those surprisingly big and unexpected challenges, but Strange has prepared for it through her own initiative and with the encouragement of a university culture that shares her values. She hopes to make a career in nonprofit communication, especially in a museum setting, but whatever career she chooses, she is certain that she wants to continue serving her community in some way. “It matters a lot to me,” she said. “It matters a lot to a lot of people."
Samford is a leading Christian university offering undergraduate programs grounded in the liberal arts with an array of nationally recognized graduate and professional schools. Founded in 1841, Samford is the 87th-oldest institution of higher learning in the United States. The Wall Street Journal ranks Samford 1st nationally for student engagement and U.S. News & World Report ranks Samford 66th in the nation for best undergraduate teaching and 104th nationally for best value. Samford enrolls 5,683 students from 47 states and 19 countries in its 10 academic schools: arts, arts and sciences, business, divinity, education, health professions, law, nursing, pharmacy and public health. Samford fields 17 athletic teams that compete in the tradition-rich Southern Conference, and ranks 6th nationally for its Graduation Success Rate among all NCAA Division I schools.