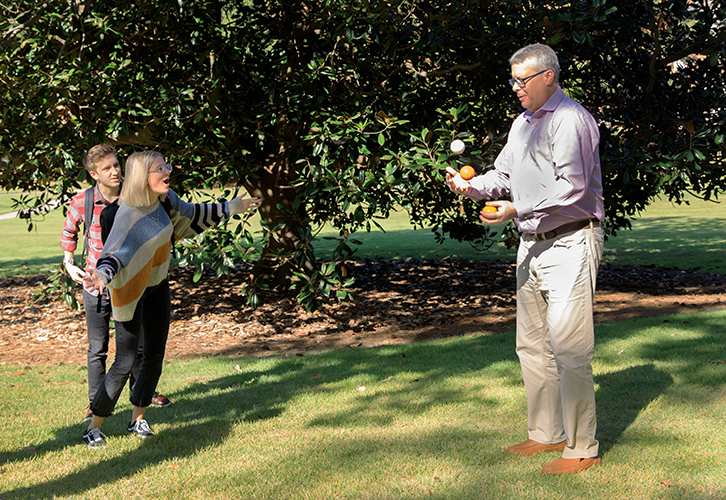 The Dr. James Barnette Endowed Scholarship will be awarded to students when its endowment reaches $25,000. An anonymous donor has offered to match gifts to the new fund up to a total of $20,000 through the end of 2021,  and the university is actively seeking to make the most of that generous offer. The scholarship funds will be awarded in two ways:

• An annual preaching award in Barnette’s name will include a certificate or a plaque and a financial award procured and purchased by the Department of Biblical and Religious Studies, given to a student who has significant experience and has excelled in the area of preaching (having taken a class in preaching and/or participated in the Samford Sunday preaching program, or having other experience in preaching).

• A scholarship for a student (or multiple students, depending on the size and growth of the endowment) from the Department of Biblical and Religious Studies who has/have expressed interest in (or intent to head towards) ministry or missions, and who has (significant) financial need.

Barnette, a native of Louisville, Kentucky, graduated from Samford hoping to return someday and inspire new generations of students as his professors inspired him. He earned M.Div. and Ph.D. degrees at Southern Baptist Theological Seminary and then did return to his alma mater in 1994, as Minister to the University. His service included teaching religion courses, and a decade later he became a full-time professor. Barnette also directed the university’s Preministerial Scholars Program, through which he mentored innumerable students called to full-time ministry, and who are now serving in churches across the nation.

Barnette was an exemplary teacher, serving as a professional mentor for young people called to ministry and creating an interactive classroom environment that facilitated meaningful discussion of religion. He contributed scholarship on preaching, Christian worship, ministerial formation and ministerial ethics to journals including Review and Expositor, Preaching and Journal of the American Academy of Ministry. He co-authored Homely Joys–a collection of prayers and poems– with his father, Henlee Barnette, a longtime professor at Southern Baptist Theological Seminary. He was a frequent speaker at ministerial conferences and preached and served on the Advisory Board for Day 1, a weekly radio broadcast heard on more than 200 stations in the U.S. and overseas.

In addition to his teaching and scholarship, Barnette served in various leadership roles at Brookwood Baptist Church in Mountain Brook, Alabama, most recently as Senior Pastor.

At Samford’s Opening Convocation in January, the university honored Barnette with its George Macon Memorial Award, presented annually to a faculty member who through outstanding performance as a teacher, counselor and friend demonstrates the ability to inspire students to greatness. Jim Barnette touched many lives through his service, and richly deserved the award.

Samford invites those who benefited from Jim Barnette’s teaching, preaching, friendship and counsel to take advantage of the matching offer and join us in further honoring his life’s work. To support The Dr. James Barnette Endowed Scholarship, please direct your gift here.