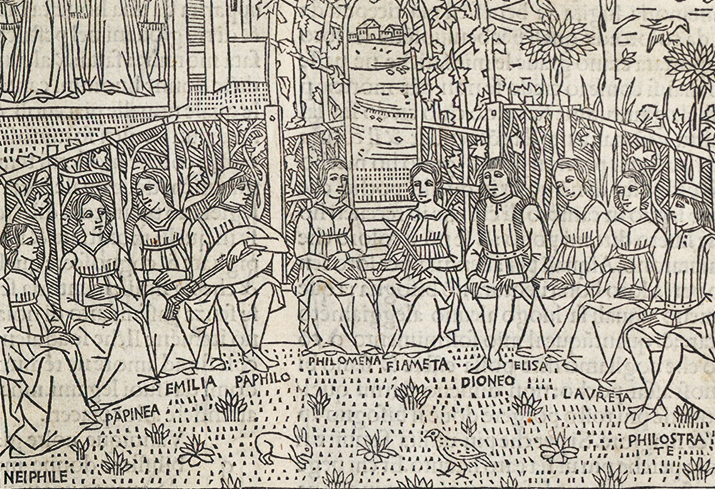 An illustration from Boccaccio's Decameron, one of many classic texts that describe life during times of plague (Wikimedia Commons)

Samford University will co-sponsor the 26th annual Association for Core Texts and Courses (ACTC)  conference online April 12-16, alongside partners Mercer University and Oglethorpe University. Samford was scheduled to host the conference in person on its Alabama campus in 2020, but COVID-19 forced cancellation of the event. Since then, virtual conferences have thrived, higher education has adapted to the challenges of the pandemic, and ACTC is back, this year with the theme of Crisis and Consolation: Liberal Education in the Time of COVID-19.

“The Covid-19 pandemic has sent us into isolation, changed the way we teach and learn, and reorganized our lives in myriad ways, but we are not the first generation to face such disruptions,” organizers wrote in conference announcements. “Thucydides wrote of the plague of Athens in his History, and Sophocles staged Oedipus Tyrannus during that plague. Boccaccio set his Decameron in a health crisis that undermined the social order of Florence and sent its protagonists into the country for fresh air and diversion. Camus’s Plague explores impossible choices presented to health care workers and families when an incurable illness ravages a community.” The organizers invited papers and panels on such literary/historical topics, and also invited reflections on teaching core texts during the pandemic.

The ACTC is dedicated to fostering the use of world classics and other texts of major cultural significance in undergraduate education. It also supports the development of required core programs that engage with those texts. Samford shares in that mission through the Cultural Perspectives courses that are the common foundation for all of its undergraduate degree programs.

“Since 1997 Samford has been committed to teaching significant primary texts and authors to our freshmen,” said Jason Wallace, Stockham Chair of Western Intellectual History and director of the university’s Core Texts Program. “From the start of our Core, the Association of Core Texts and Courses has been the most important national organization for creating dialogue with other colleges and universities committed to similar curricula.”

Wallace said the ACTC conferences provide a unique and welcome opportunity for professors to partner in conversations about the texts they teach. “Unlike other academic conferences, panel presentations and plenary talks showcase new ways to read and think about perennial ideas that continue to shape the world in which we live.” Samford has been an active participant in that annual exchange of ideas, Wallace said. “This is Samford’s third time co-hosting this great conference, and we are honored to be part of it.”