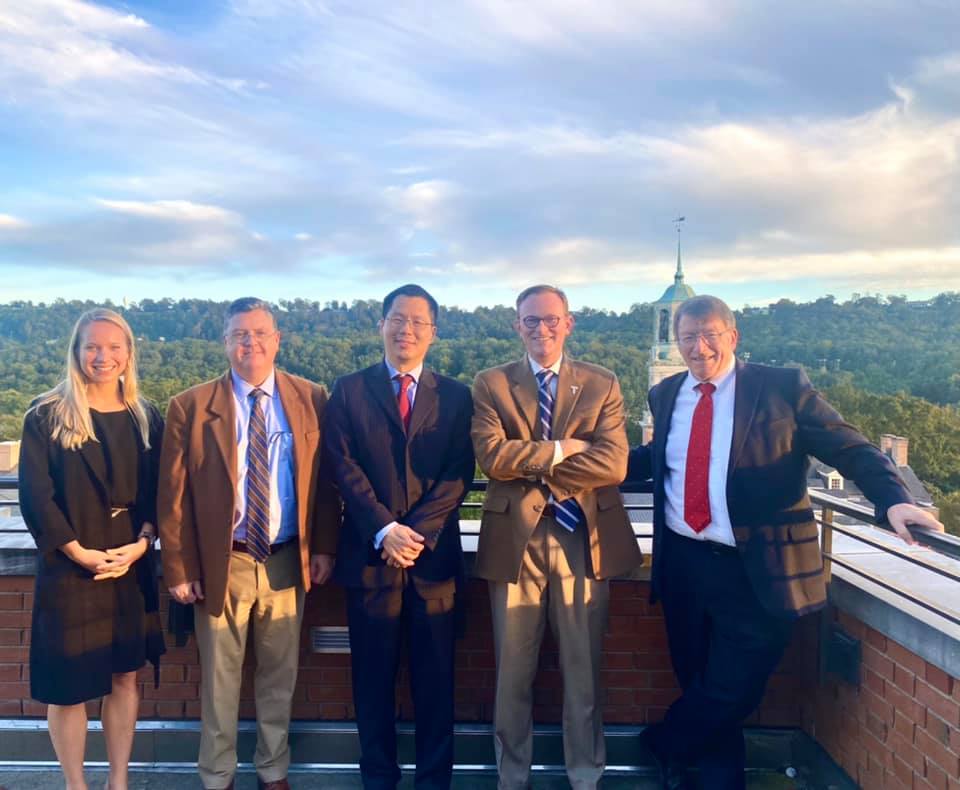 James R. Stoner–Hermann Moyse, Jr., Professor and director of the Eric Voegelin Institute at Louisiana State University–spoke at Samford University Oct. 18 on the topic of "Can Government Legislate Religion?" for the first in a series of lectures to be hosted by the Howard College Colloquium on American Citizenship and sponsored by the Jack Miller Center. The Colloquium aims to explore the meaning and purpose of citizenship in light of the Western intellectual heritage, American Constitutional government, free market economics and Judeo-Christian ideals.

Among the legislators of religion, Stoner presented Plato, Moses, Thomas Aquinas and the Puritans of early Colonial America.

Plato, Stoner observed, invoked the gods of his culture in The Laws, prescribed the harshest legal penalties for temple robbers, and condemned impiety. Moses delivered a set of moral, judicial and ceremonial laws that included detailed prescriptions for personal behavior and even religious architecture. Aquinas, in his Treatise on Law, described the interaction of eternal, natural, human and divine laws, and concluded that although government can’t legislate truth, it can properly legislate in support of religion, “holding Christians to their religious duties, and, of course, giving legal sanction against crimes that violate natural law and moral duty,” Stoner said.

The Puritan “city on a hill” as described by John Winthrop was a society in which government and religion were mutually supportive, and in which citizens were required to attend church, tithe and pay taxes in service to the church. Puritan law prescribed punishments based on literal readings of the Bible, and included the violent persecution of people believed to be witches. Stoner noted that the extremes of the culture also led to the development of greater religious liberty elsewhere in the colonies, including in Rhode Island, under the leadership of Massachusetts Puritan exile Roger Williams.

The Liberals
Stoner cited the Roman Catholic Church on the side against legislation of religion because it declared its independence from states. Archbishop of Canterbury Stephen Langton–the man who divided the Bible into chapter and verse–affirmed in the Magna Carta that the state can legislate in support of Christianity but can’t suppress it in any way or promote a competing religion. This church-affirmed independence of church and state was further reinforced by Reformation-era resistance to the church, Stoner said.

All of these views, pro-and-con, swirled in the era of the American Revolution and early Republic. Stoner focused especially on Thomas Jefferson, who wrote in his Virginia Statutes on Religious Liberty that “almighty God hath created the mind free.” Stoner said Jefferson clearly separated civil rights from religious views and other opinions, and considered government attempts to mold humans, even indirectly, to be a form of tyranny. “When people are forced to say what they don’t believe, or do what they’re not convinced is right, they’re made to be hypocrites, and religion itself is corrupted,” Stoner said of Jefferson’s view.

But Jefferson’s voice was just one of many, Stoner said, and the differences in individual views was reflected in a variety of federal compromises ranging from whether or not to provide government services on Sunday to the disestablishment of religion in the new states. Religion was not absent from government or invisible, Stoner observed. Leaders then, as now, invoked religion in state addresses. The U.S. Congress still hires chaplains and at one time even funded missionaries. Religious “blue laws” remain in force in many states.

The balance achieved in the American experiment impressed 19th century chronicler Alexis De Tocqueville, who observed that the American approach to religion and state made both stronger. Elements of the culture De Tocqueville described still exist, Stoner said, but the number of religious Americans has declined dramatically since 2000. Now, he said, courts and public both have come to expect that laws must not merely protect religious liberty, but “must have a secular purpose and a primarily secular effect.” As decisive court cases of the mid-20th century prohibited state support of religion, he said, the legislation of morality came to be viewed as a violation of individual rights.

If there is some truth in the thoughts of Plato, Moses, Aquinas and the Puritans, Stoner said, “then there is the sense that religion is legislated, whether intentionally or not." "The laws a people make or accept reflect and, in turn, form their views of what matters, so that, in the end, the choice is not whether we legislate religion, but which religion we legislate, or whether religion or irreligion.”

“Doesn’t the fierce hostility against religion in powerful quarters of our polity today stem from insistence on living in a way that most religions condemn, and demanding that this way of life not be condemned but instead permitted, and even affirmed, by the law?,” Stoner asked. Although he does not advocate a return to Puritan government, he does conclude that government should legislate in ways that promote a common good. “We need once again, I think, to seek to legislate not religion per se, but the laws that make it possible for genuine religion to thrive,” he said, “preventing wrong where possible, promoting good where possible, and not being afraid or ashamed if the motive for our actions comes from faith–a faith that, after all, treats justice as a virtue, and charity as virtue’s crown.”