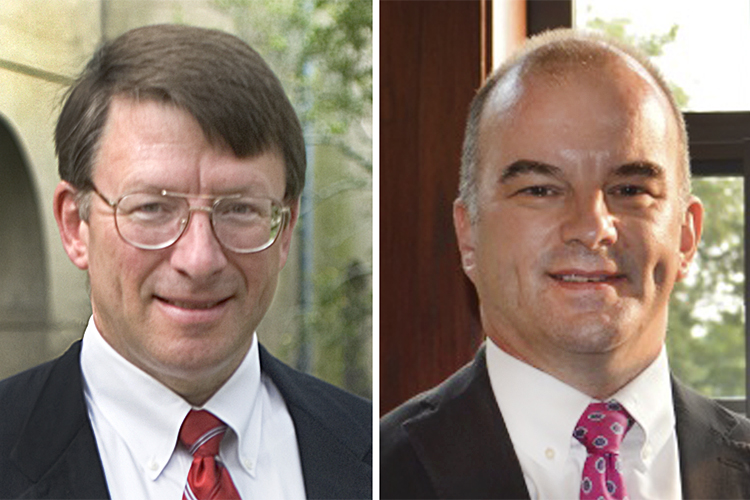 A new program at Samford University will host two free public lectures this fall and winter. Jason Wallace, Stockham Chair of Western Intellectual History and director of Samford University’s Core Texts program, announced the creation of the Howard College Colloquium on American Citizenship, which aims to explore the meaning and purpose of citizenship in light of the Western intellectual heritage, American Constitutional government, free market economics and Judeo-Christian ideals. The lectures, by James R. Stoner, Jr., and Carl Trueman, will help launch the new initiative.

James R. Stoner, Jr., is the Hermann Moyse, Jr., Professor and director of the Eric Voegelin Institute in the Department of Political Science at Louisiana State University, and the author of Common-Law Liberty: Rethinking American Constitutionalism. He will present the lecture "Can Government Legislate Religion?" during Samford's observance of Constitution Day, October 18, at 6 p.m. in Cooney Hall 400 (Regions Room).

Carl Trueman is professor of biblical and religious Studies at Grove City College, and the author of The Rise and Triumph of the Modern Self: Cultural Amnesia, Expressive Individualism, and the Road to Sexual Revolution. Trueman will speak in February about the modern therapeutic self and its consequences for American society. Event details will be announced later this fall.

Wallace will lead the Howard College Colloquium on American Citizenship along with economics professor Art Carden, History Department chair Jonathan Den Hartog and Political Science Department chair Lee Trepanier. “The departments of economics, history and political science will be working together to offer student, faculty and community forums addressing questions of citizenship and responsible usages of freedom in light of Western political and moral traditions,” Wallace said. “We hope to be a campus centrifuge for conversations about the uniqueness of the American constitutional order and the kind of personhood and philosophical commitments that make such an order successful.”

The program will advance its mission through curriculum and faculty development, student enrichment and community outreach. The fall and winter lectures serve in multiple ways, and are supported by a grant from the Jack Miller Center. “With support of the Jack Miller Center, the Howard College Colloquium on American Citizenship can invite these types of speakers on campus for the Samford community to learn and discuss about the meaning and importance of American citizenship,” Trepanier said. “This is a wonderful opportunity for Samford students, faculty, staff, and alumni to listen to a nationally known expert on the topic of religion and the U.S. Constitution,” he said of the lecture by Stoner, a Jack Miller Center faculty partner.

Although the new program’s leaders represent different disciplines, Carden, Den Hartog and Trepanier are all Jack Miller Center Fellows, and share a particular vision of citizenship and Samford’s role in developing it. “I’m excited about the interdisciplinary character of the Colloquium and how it can equip Samford students with the tools they will need for citizenship in the twenty-first century,” Den Hartog said. “It will build on and enhance the things that already make Samford distinctive, and I think it has the potential to carry us to a new level of academic and spiritual excellence," Carden added.