Williams Explores Redemptive Message of Epistle to the Galatians 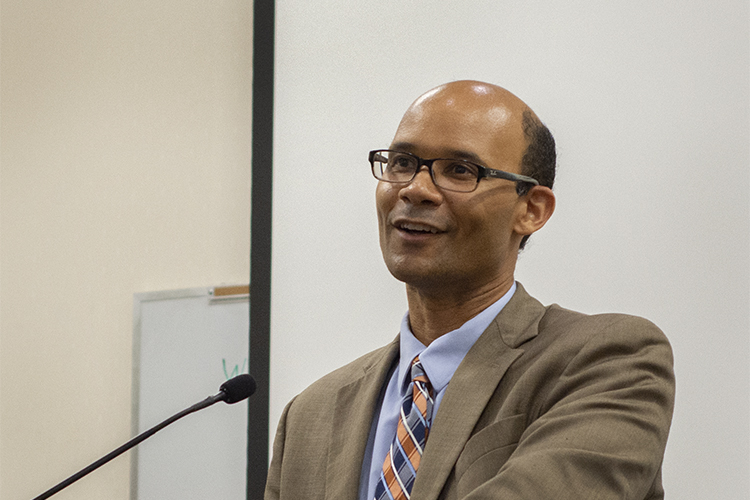 Southern Baptist Theological Seminary professor Jarvis Williams brought to Samford University a scholarly and animated discussion for the 2021 Holley-Hull Lecture Sept. 30. The lectures, hosted by the Department of Biblical and Religious Studies, address a wide range of topics in New Testament studies and contemporary theological and social issues. For this year’s event, Williams explored the theme of his latest book, Redemptive Kingdom Diversity: A Biblical Theology of the People of God, by applying the more detailed focus of his forthcoming monograph, The Spirit in Galatians.

Some teachers of the Jewish and gentile followers of Jesus in ancient Galatia, Williams explained, emphasized acts of law such as circumcision over the transformative act of belief in God’s redemption of creation through the death and resurrection of Jesus. Williams said Paul the Apostle’s urgent Epistle to the Galatians seeks to turn his audience back toward a spirit-filled understanding of God’s redemption as vertical in its restoration of the relationship between God and God’s people, horizontal in its restoration of the relationship between Jews and gentiles, and cosmic in its emancipation of the entire creation from the power of sin.

Williams said Paul’s letter is apocalyptic in its emphasis on a shared and radically transformative spiritual revelation that promises liberation from a “present evil age.”

The letter is also forensic in its emphasis on justification by faith, Williams said. And although he did not challenge that traditional interpretation, he offered a more nuanced view. “My goal here is simply to make the argument that justified people walk in step with the spirit, while demonstrating that a faithful walk in step with the spirit is not the same thing as justification by faith,” he said. “In my view, justification is God’s verdict of ‘not guilty,’ declared upon those who have faith in Jesus Christ. It is the verdict that comes to us on the basis of Jesus Christ. Christ’s righteousness is reckoned and accounted on our behalf, by faith, because of our union with Jesus Christ, apart from Torah observance, apart from becoming a Jew, apart from changing our ethnicity. We’re justified, made right with God, not condemned by God, purely on the basis of God’s saving action in King Jesus.”

Williams observed that Paul also makes a salvation-historical argument against the Galatian teachers’ emphasis, describing the law as a form of guardianship imposed due to transgressions–a temporary condition from which Christ liberates believers without regard to the social identities, laws and cultural boundaries that otherwise separated Jews and gentiles. “Neither gender, nor ethnicity, nor social status grants Jews and gentiles the blessing of Abraham, or excludes them from it,” Williams said. That understanding of Galatians, he said, can “shed light on redemptive kingdom diversity, as it carefully applies Paul’s first century Jew-Gentile problem to the 21st century race and ethnic problems.”

“The cross and resurrection of Jesus are the foundation for a biblical and theological vision for redemptive kingdom diversity for ethnically diverse image bearers,” Williams concluded. “As a result, ethnically diverse image bearers in Christ can–and must–pursue redemptive kingdom diversity,” and not just in multiethnic churches. “If you’re in a mono-ethnic church, you’re not off the hook for living redemptively in the real world with real people who are broken,” he said. “What God has done for us in Jesus moves the people of God toward people, to live redemptively–loving God, loving neighbor, caring about them holistically as well as caring about their souls. We must do this in a way that is consistent with our own context and rhythms in life, as we preach, teach, obey, apply and live out the gospel story where we live, work, worship and play, and as we use common grace and common sense, or else we will not inherit the kingdom of God.”

The Howard L. and Martha H. Holley Lectures: New Testament Voices for a Contemporary World are hosted by Samford’s Department of Biblical and Religious Studies and the Center for Congregational Resources. The series honors William E. Hull, a Baptist minister and New Testament scholar who served Samford University as provost, university professor and research.